The most beautiful Churches in Vietnam

11/04/2019 14:10
Chia sẻ
The country’s architecture is owed to years of French colonial styles, paired with traditional Oriental designs, resulting in an elegant combination of antiquity and modernity. Check out the most awe-inspiring churches you’ll find throughout Vietnam. 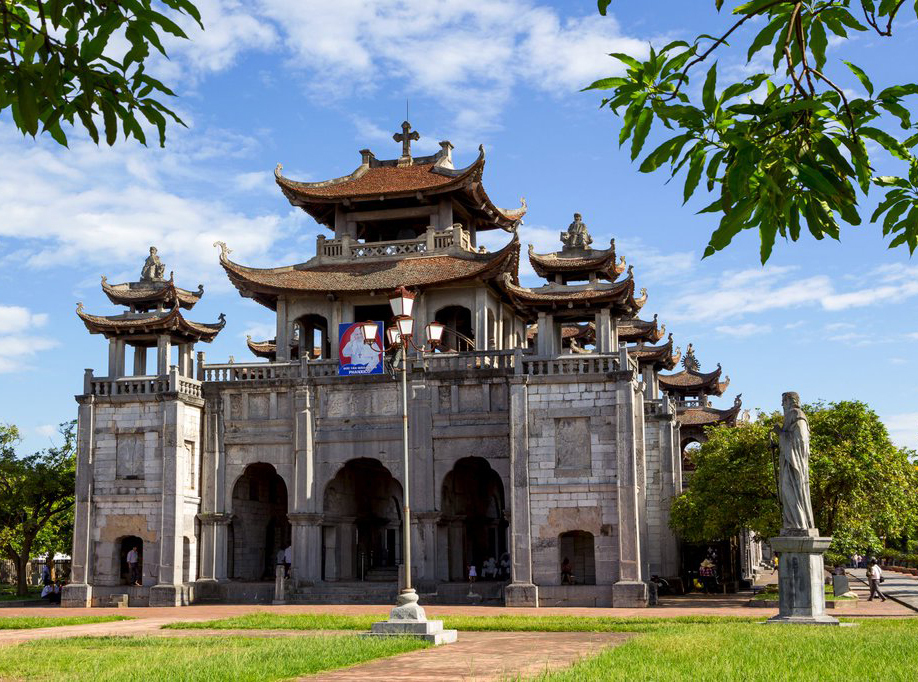 Located in Ninh Binh province, this stunning cathedral, built in the mid 1880s is carved entirely from natural stone. The cathedral sits in a serene complex with a lake, bell house, and several grottoes. Inside, you’ll find a red worship space delicately adorned with gold features, as well as large stone columns. Apparently the preparation phase took at least 10 years so the locals could extract materials from nearby mountains. The results of their hard work is waiting for you (and your camera) to stop by! 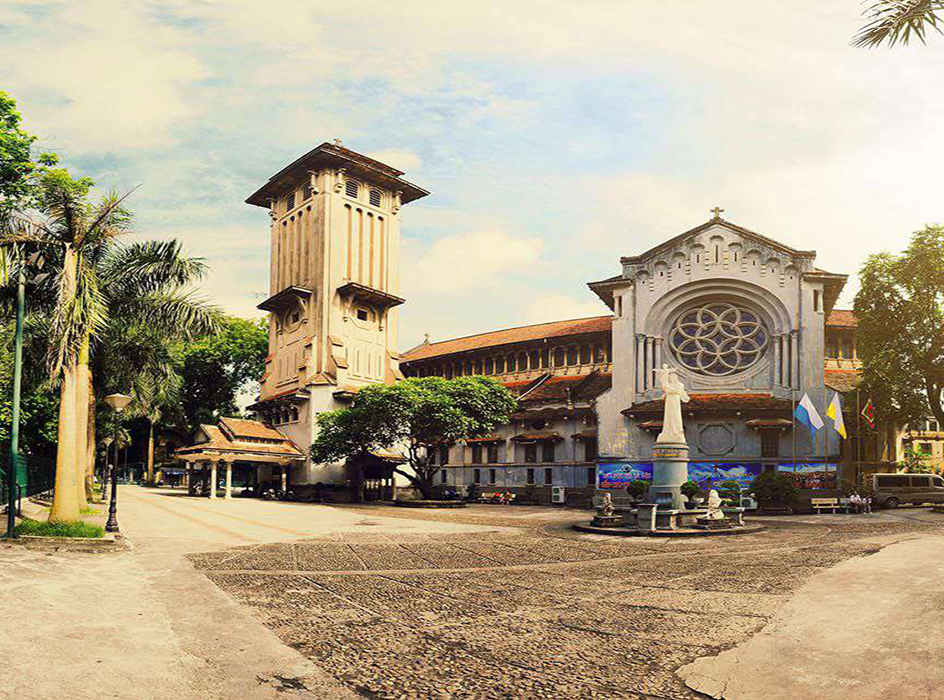 While the official name is “Church of Martyrs”, Cua Bac Church is considered a prime example of the marriage between European and Vietnamese architectural styles. Ernest Hébrard designed the building with Art Deco-inspired features, combined with Vietnamese roof tiles, while also designing the church to match the surrounding greenery. The result is a gorgeous, eclectic church. 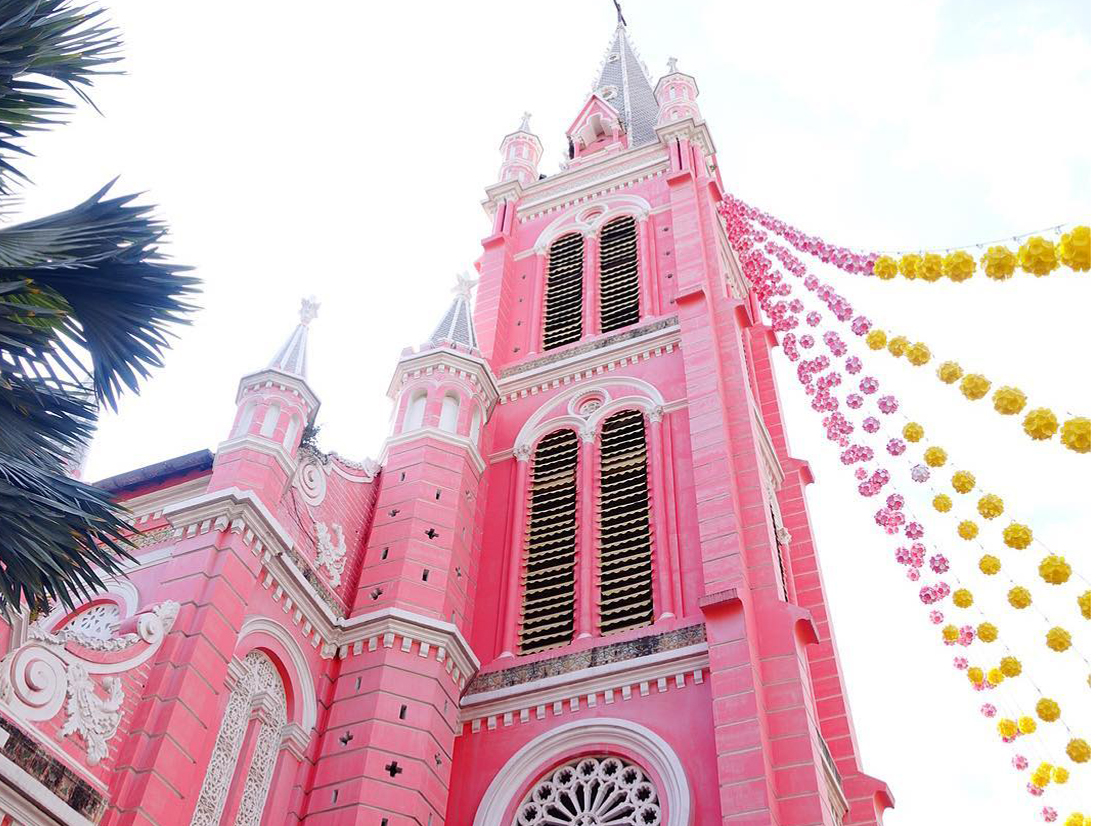 Feast your eyes on a sight I bet you have never seen before: a Gothic-inspired hot pink church located in Saigon’s District 3. This unique church is one of the most underrated sights in the city. Its intense colour is hard to miss, and the interior is equally as stunning. During Tan Dinh’s 1929 reconstruction, wealthy parishioner Francois Haasz and his Vietnamese wife generously decorated the inside with Italian marble, creating a rich, elegant feel. To add a historical dimension to Tan Dinh, the founder of the church, Father Donatien Eveillard, is buried beneath the nave. Make sure you cross this beautiful church off your “to see” list early on. 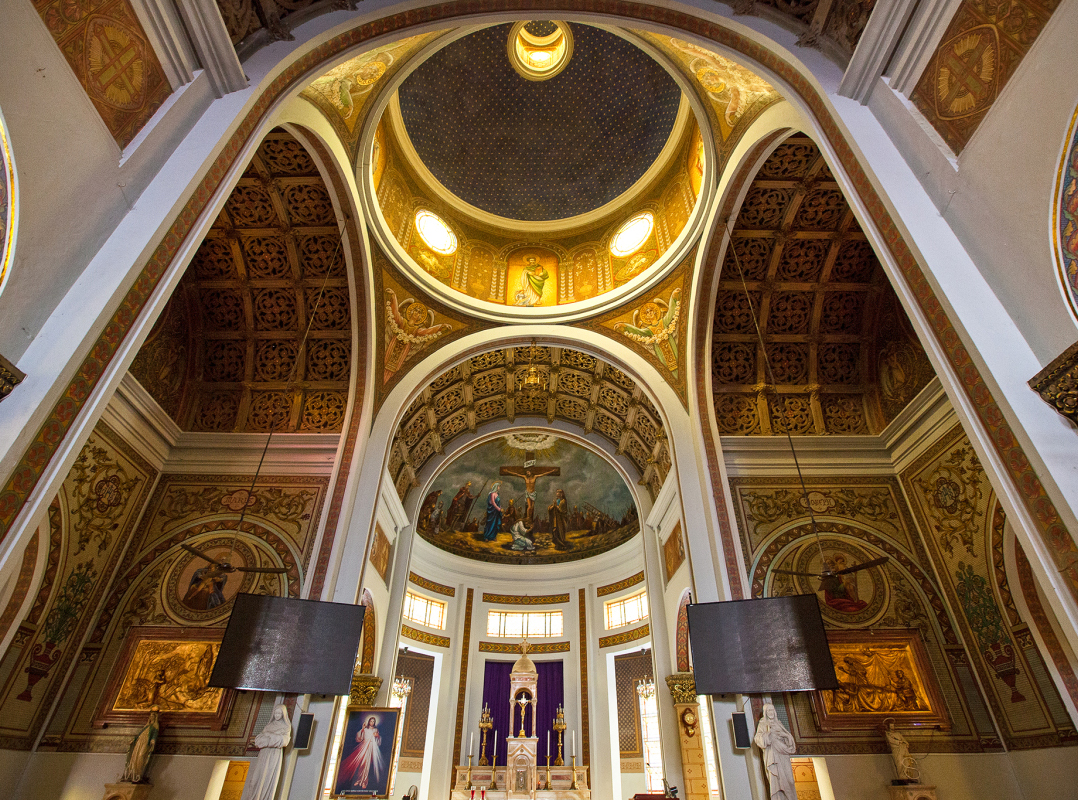 Hanh Thong Tay Church is situated among lush trees and delicate flowers, offering a respite from bustling downtown Saigon. This Byzantine-style church features three altars carved from Italian golden marble as well as intricate mosaics on the ceilings. The rare architectural style is an interesting sight and is worth escaping to from the bustling urban city center. Constructed in 1928, this church is built of simple cement blocks, yet it is a marvel to behold. Located in the upper part of coastal Nha Trang, the Church of Christ the King features a striking exterior, but it’s the interior that will take your breath away. With wide, curved domes, rose doors and a remarkable amount of stained glass windows depicting Catholic saints, it is spectacular. It is commonly referred to as the “Mountain Cathedral”, so if you ask locals to find the church, make sure to mention the nickname. 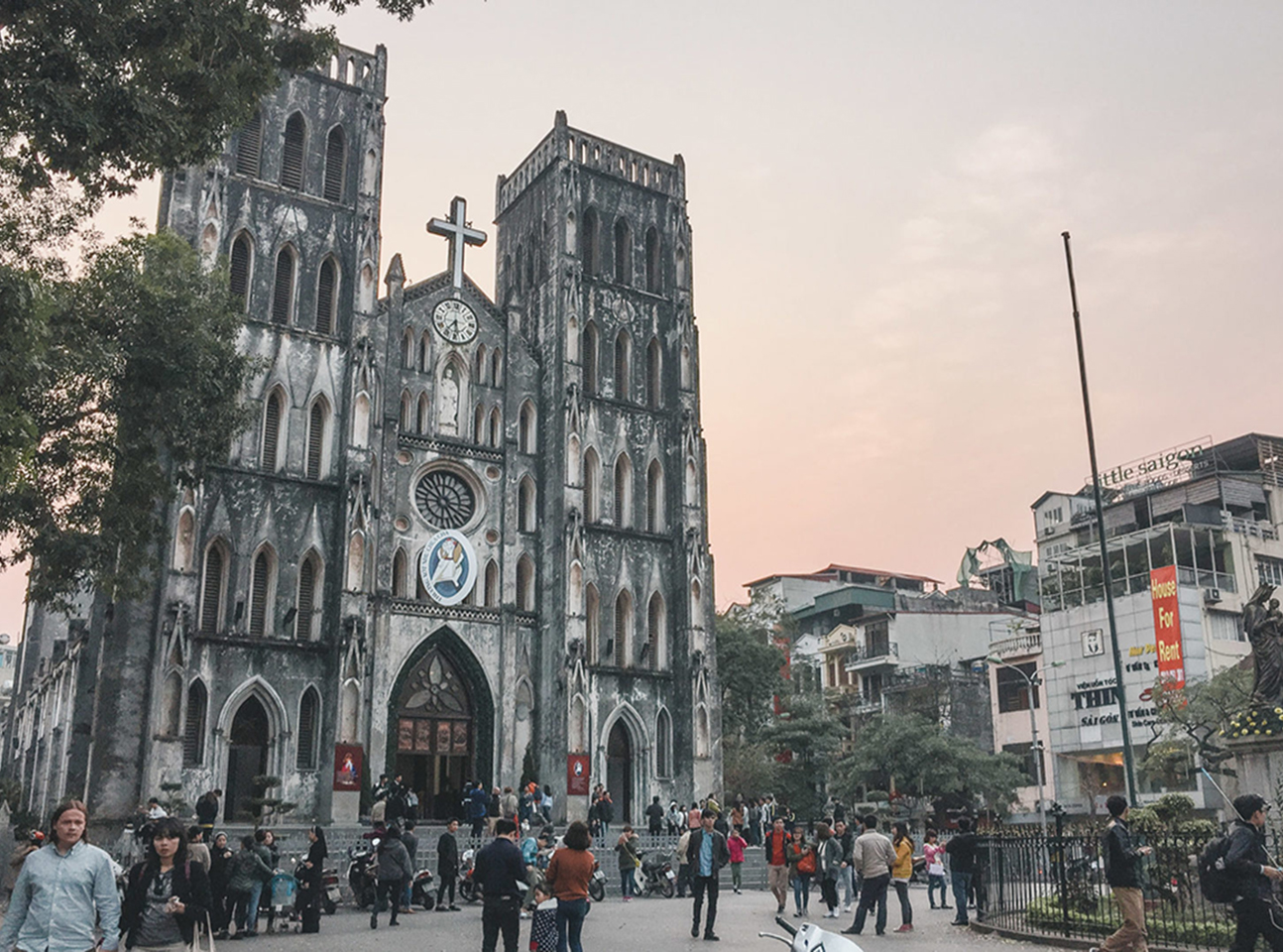 St. Joseph’s Cathedral is the oldest church in Hanoi, with construction beginning in 1886, and the design intending to emulate its Parisian counterpart (Notre-Dame de Paris). St. Joseph’s holds mass several times per day, with each mass broadcast outdoors to anyone unable to enter, leading to regular, large crowds during mass times. The cathedral was built in Gothic Revival-style, built of granite slabs and gorgeous stained glass windows shipped to Hanoi from France. The exterior, however, is being seriously worn down, as pollution is a severe issue in Vietnam’s capital city. As St. Joseph’s is a prime tourist destination, there are several souvenir shops and Western-style restaurants nearby. 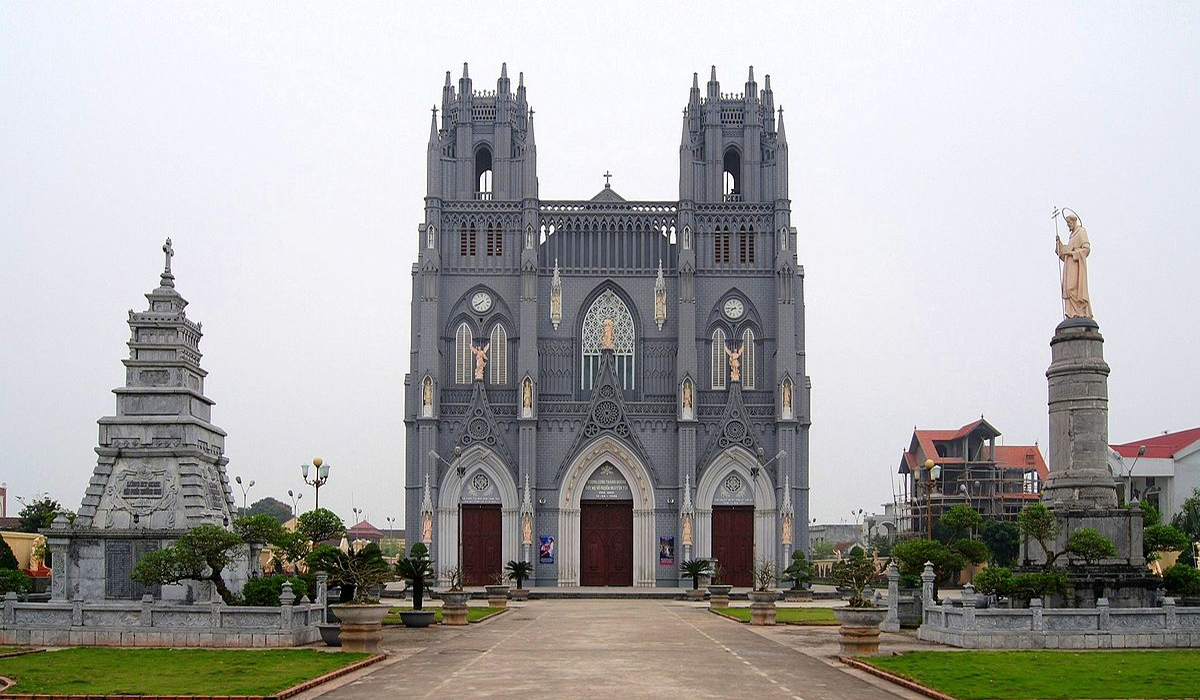 Fun fact: After a major storm devastated this church in 1929, a nation-wide lottery funded its reconstruction in 1933. This basilica is yet another stunning architectural marvel in Vietnam. The cathedral rises 30m high and is flanked by two tall bell towers with four bells each, and each bell weighs a staggering two tons. The austere decor is enough to have you marveling at the outside, but as with many Vietnam churches, the inside is even more stunning. The enormous, domed ceiling is painted a gentle yellow, with accentuating white pillars and classic stained glass windows, giving the entire cathedral a romantic glow when the sun hits the windows on its way down the horizon. 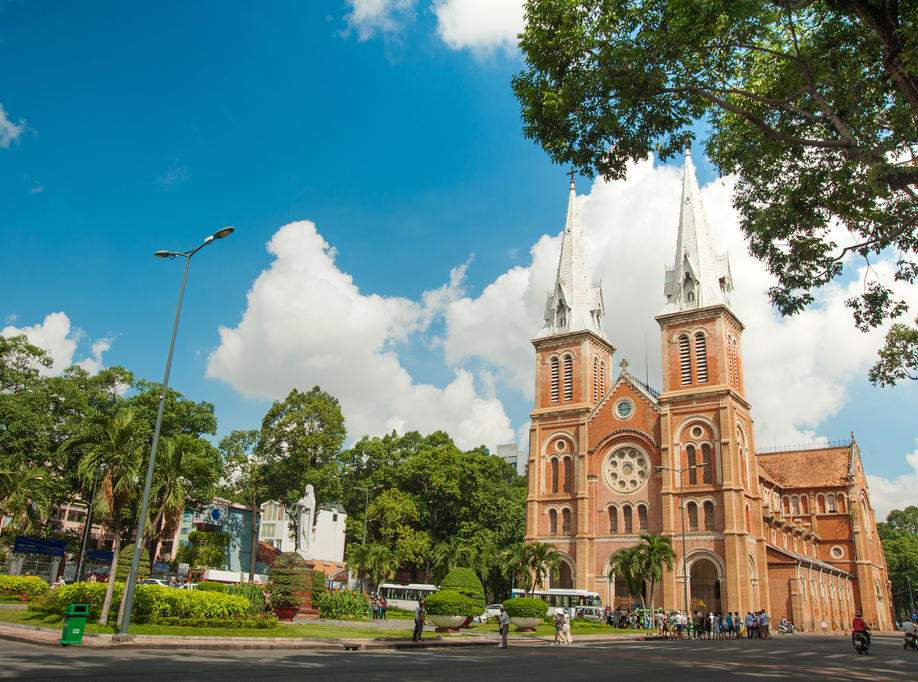 This list would be incomplete without the most famous church in Vietnam on it! At any given day, you’ll find crowds of selfie-stick wielding tourists, just-married couples and their professional photographers, along with everyday locals camped around the Basilica selling souvenirs. The red bricks adorning the facade were shipped to Saigon from Marseilles, garnering a lot of attention from the locals, as they were unique at the time. While it is one of the top tourist hot spots in the country, it is currently undergoing a massive renovation, and you won’t be taking any tours of the inside until 2019. However, an English and Vietnamese mass is still held every Sunday at 9:30 a.m.