Among 140 islands in ha tien bay, Hon Nghe island has a unique oval shape made of sandstone and karst with a peak of over 300 metres. With a total area of 3.8 square kilometres, embraced by the green colour of the trees, long white sand beaches, and clear blue water, hon nghe looks like a beautiful raw jewel hidden in the arms of mother nature.

21/06/2018 08:51
Chia sẻ
Departing by a sleeper bus from Saigon the night, the next morning, we arrived in Ba Hon town, Kien Luong district, Kien Giang province to catch the train to Hon Nghe island. Though the small fishing ship was full of people, the seating arrangement was in order.

No one talked out loud to others; their smiles looked so sincere though their faces revealed the signs of austerity. In 2 hours floating on the sea, we passed through small islands scattered along the way, some names sounded full of ocean flavours like Hon Heo, Ba Hon Dam, Hon Re Lon, and Hon Re Nho. We set foot on the island when the sun had risen, spreading the heat across the roads and spraying millions of sunbeams over the sea. After a long time being drown in a busy life in the city, we happily breathed in the fresh air mixed with the scents of plants and the salty flavour of the sea. 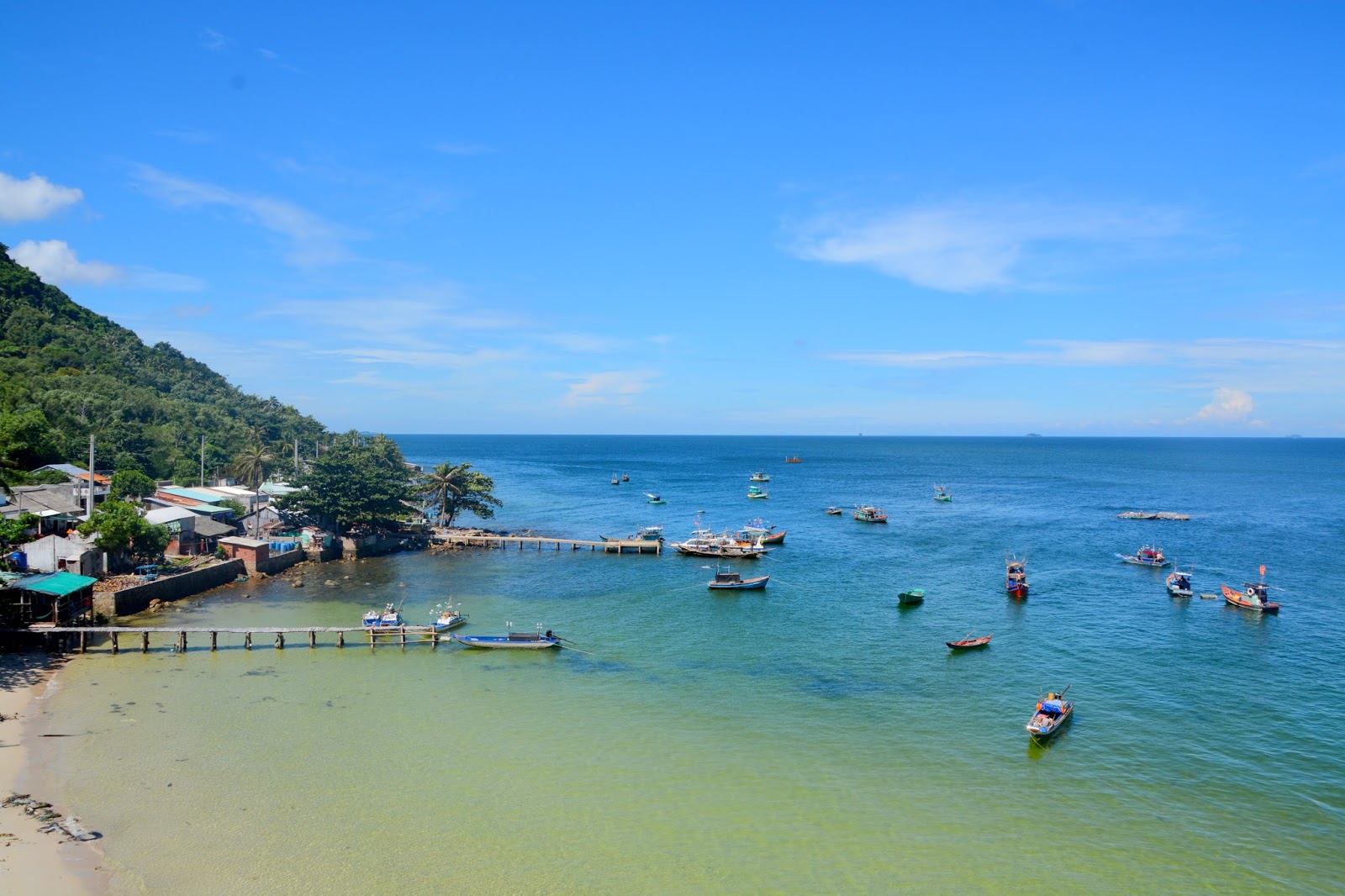 The person that picked us up was Mr. Phuc, who was about 50 years old and burly with the firm sun-burned skin of a person who as often exposed to the sun, while his face looked really gentle. Mr. Phuc and his wife came from the North of Vietnam; they went with their families to the South to make a living, so their life used to face a lot of difficulties.

From the time they went to the island to raise fish and other seafood, thanks to their hard work and agility in the business, they could save money and made a better life for themselves. Now their children are grown up; they both studied and set up in Saigon. Mr. Phuc and his wife have a spacious and airy house with a balcony overlooking the sea. We brought the hammock to the backyard, lay down and listened to the waves clapping the cliffs below, and felt the cool breeze. It was a long time since we had had such a peaceful and poetic noon.

Mr. Phuc, after giving us thoughtful instructions about the roads on the island, went back to the fish cages on the sea and waited for the fishermen to return in the afternoon. He also invited us to visit his cage area to enjoy fresh seafood and admire the sunset, which we would not want to miss.

That afternoon, we drove the motorbike to explore the island. Because the island was quite small, it took us only half an hour to travel around and drive on the slopes along the mountainside with the clear blue sea on one side. Along the road, we saw short tropical almonds with large branches offering wide cool shade, the old boat full of colours on the roadside waiting to be repaired, and a small village where houses with low roofs stay close together. Some families brought old wooden panels to the front porch, and the neighbors gathered together and chatted happily, the children played and ran around the Muntingia tree. The scenery was so simple and peaceful, something we couldn’t experience or see in Saigon anymore.

Not very long ago, Hon Nghe had very few people. At the beginning of 2017, electricity was provided to the whole island, which greatly improved people’s lives. However, Hon Nghe has not attracted a large number of tourists like other islands. Most of the pilgrimages come here to visit Hang pagoda and Ba Chua Xu temple, so the island still retains quiet and simple features.

In the afternoon, when the sun was turning orange, Ms. Diep took the motor boat to the dock to take us to the floating wooden raft which was only about 5 minutes from the shore. The bright sunshine coated the sea surface with a glittering golden colour. We arrived at the raft at the time the fishermen returned and pulled up the net full of shrimp and fish. Their raft was quite large compared to those around, attached to the grouper cages deep under the water. The groupers that weighed several kilos swam in the cage. Mrs. Diep boiled some crabs caught from the net for us; the white meat was extremely fresh and delicious, tasting very different from the crab we ate in the city. We sat right on the fish cage, enjoyed fresh crab, and watched the sunset. The red sun slowly dived into the sea, leaving the whole sky purple in the sunset.

That evening, we stayed a bit longer to see Mr. Phuc and his wife buying seafood from fishing boats. Mantis shrimps, crabs, all kinds of salt-water fish, even seahorses were purchased. All were fresh and poured on the wooden raft floor. Mr. Phuc and his wife sorted out the seafood, bargained the price and quickly stored them in the cold storage tanks. The basketball of seahorses was kept separate, Phuc said, because it was rare so he would use it for pickled wine. That day was a very special day; the dazzling sunset and the fresh flavour of seafood even appeared in our dreams. 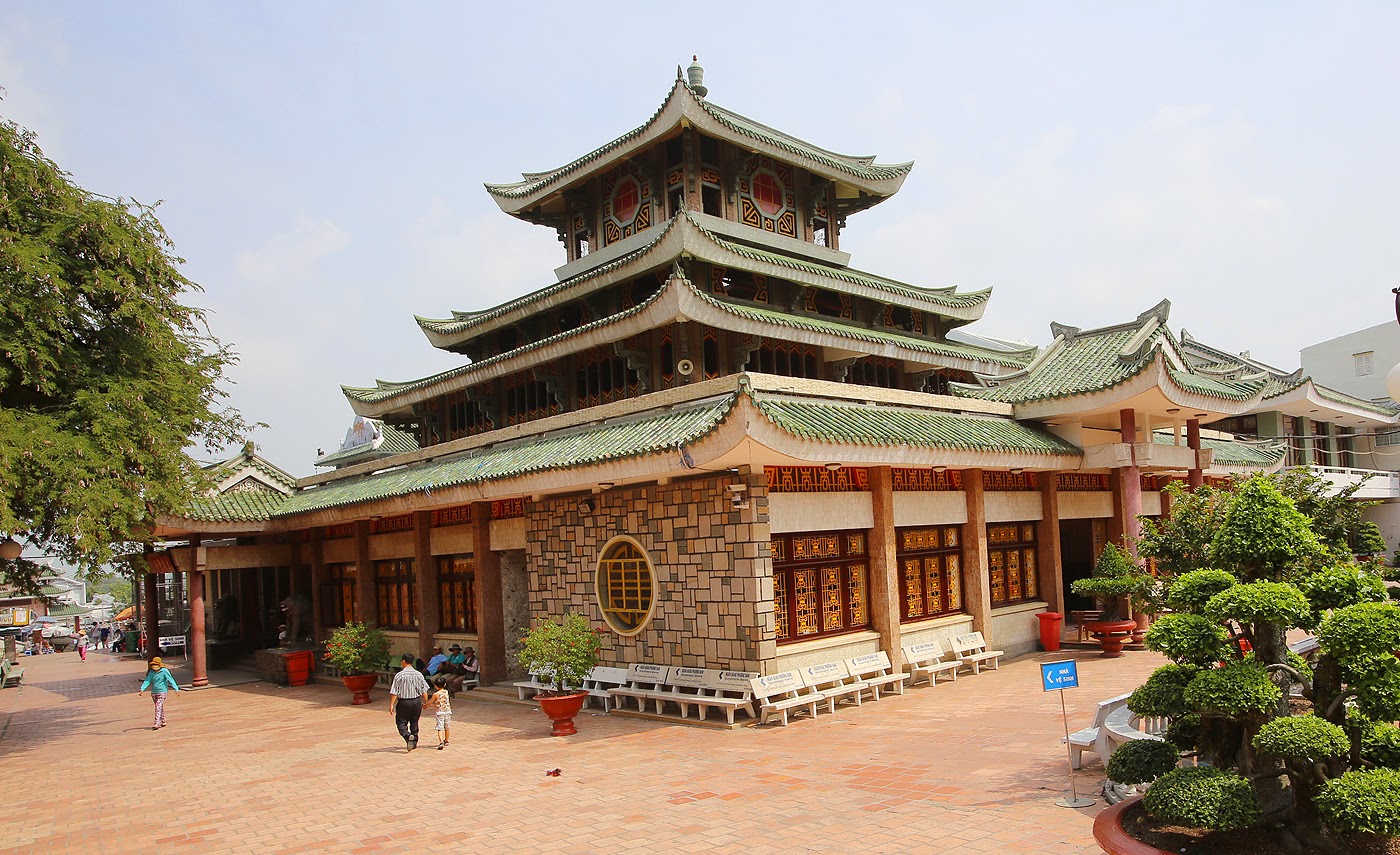 The next day, we spent time visiting Ba Chua Xu Temple, then went up the mountain to Hang Pagoda, climbed up dozens of stairs to the statue of Guanyin. The statue of Guanyin is placed facing the sea to wish for peace for people living on the island. From the foot of the statue, we could admire the panoramic view of the island, overlooked the sea and the waves. The scenery looked beautiful like a picture.

From Gia Long cave, we could see the sharp pointed limestone cliffs reaching straight to the sky. They reminded me of the Pinnacles on Borneo island, one of the most famous wonders of UNESCO. The scenery here was just as beautiful, but unfortunately, it has not been exploited properly. However, I somehow wish Hon Nghe to be less known to tourists, so this small island can always retain its pristine beauty.

On the island, there are many natural caves with the walls inside being eroded by water and time, covered by glossy layers, creating a magical scene when the sunlight leaks through the holes in the rocks. As Phat Co Don (Lonely Buddha) cave in Hang pagoda cave where we visited has many statues of Buddha and Arhat, the smell of incense in wet air made the atmosphere in the cave become less dreary. A warm and peaceful feeling embraced our whole body, which was so strange. Outside the cave, there were many large primitive species with their long roots covering the cave’s walls and rocks. I could also cling to the roots of the tree to climb up the cave instead of following the stairs to the main door; it felt like I was venturing to explore ancient caves in a remote area.

That was a full moon night, the beautiful bright moon was shining on the slopes in the village. People on the island gathered to eat at the yard of Ba Temple and set up a small stage to sing. At that time, Mr. Phuc and Mrs. Diep cooked a seafood dinner at home to welcome Mr. Ba who spent most of his life fishing. He had a sunburned skin and brown teeth.

Though a few teeth were missing, he loved smiling. He talked about his fishing career and enthusiastically invited us to visit other islands. After drinking a few cups of wine, he was excited to sing vọng cổ (longing for the past) music. That evening, the chatting and laughter were filled with the sound of the waves swashing at the back of the house until midnight.The next morning, we said goodbye to Mr. Phuc and Mrs. Diep and left the house very early to catch the train back to Ba Hon.

The wind was cold, the sun had just risen and there were still thousands of stars in the sky. We huddled on the dock looking at the majestic statue of Guanyin, and prayed that the life here would always be peaceful, people would always keep the spirit of enthusiasm despite the change of life.