Some traveler ever said: “If you are in love, a week in Da Lat – a rhythmic land of flowers and romance- will make your love turn into a happy ending!”

“Listening to the noon going down in the romantic town, a Da Lat-violet is filled with fog…” (written by Minh Ky, Da Cam)  is lyric of a famous song about Da Lat – one of the top prioritized destinations in Vietnam for its romantic and flowerful beauty. Located in the South Central Highlands of Vietnam (Lang Biang Highlands), Da Lat was originally the playground of the French , and today’s “valley of love”, surrounded by cool, fresh and silently charming atmosphere.


Da Lat is extremely famous for mild weather. Thanks to the advantage of height and enclosing pine jungle, the town is featured with temperate climate, with an average temperature of 18oC – 21°C, highest as 30oC and lowest as 5°C.

What is more, Da Lat has two distinct seasons, the rainy and the sunny ones. The former is from May to October, and the former from November to April. Tourists should be prepared for sudden rains in sunny season, sometimes rocky ones.  Never in Da Lat could we ever catch a storm, which make it favorable for tourists to take any daytime leisure walk. 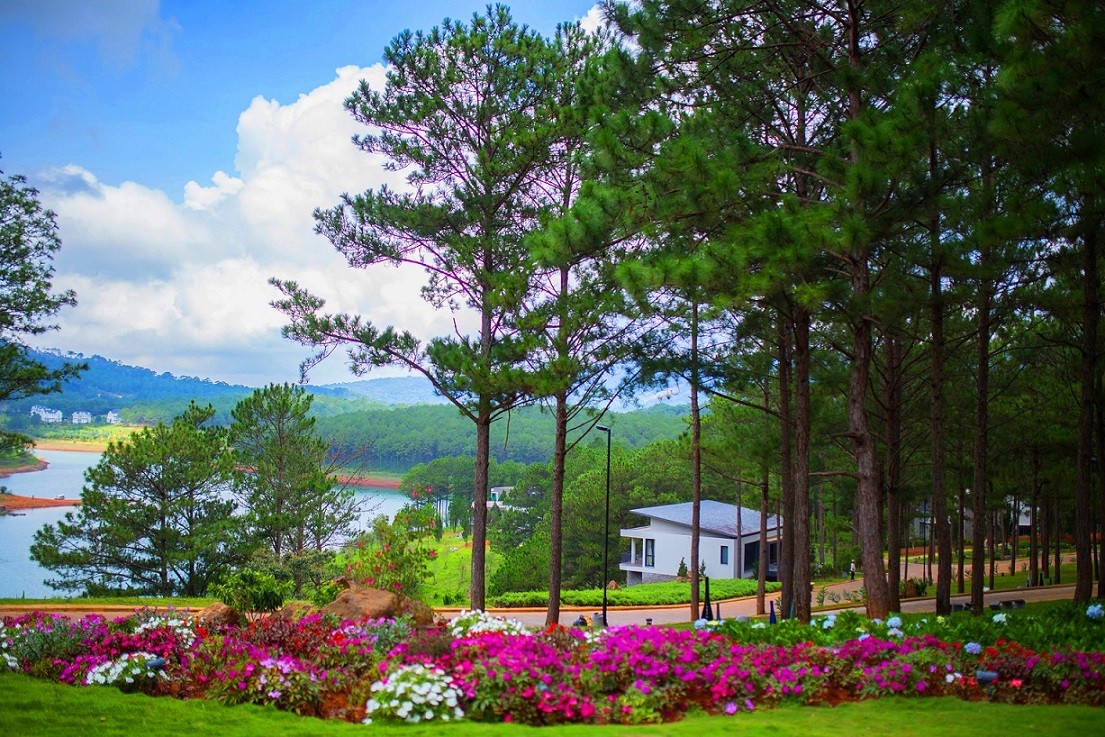 This pure land of romance was discovered by the French during their invasion in southern Vietnam. Before 1893, Lang Biang highlands, an extremely cool and fresh aired area, was the accommodation of the Viet highlanders. Yet there came the day the French would like to settle a convalescent zone in a European weather-like land in 1899. Of course, they could not miss Lang Biang Highlands then. Ever since the significant choice, Da Lat was later on built with all required French-style houses, villas, treatment places, and temperate flowers & plants, etc. This has step by step formulated today’s romantic and glamorous Da Lat, a clear mountainous air zone for escaping the heat and humidity of the coast and Saigon, or the today’s Hochiminh City.


It’s no easy at all for travellers to choose the initial visiting place in Da Lat for its widespread covering beauty. On a whole, Da Lat looks like a cross between Vietnam and the French Alps. As mentioned, most of its hotels and houses were built in French style. The town spreads across a series of pine-covered hills, with a small lake in the center, while surrounded by high peaks, creating a lovely scenery quite different from the rest of Vietnam. Temperatures are pleasantly warm by day, and quite cool at night, down to perhaps 10oC.

Today, Dalat is undoubtedly a beautiful tourist town. The vast majority of visitors are both domestic and foreign tourists on short package tours, drawn by the scenery, vivid blue skies, fresh air, flower-filled parks, and local edible treatment. Dalat is a favorite destination for company weekend outings, family get-aways, and most of all, honeymoons. For overseas visitors, it offers a chance to cool down, view a bit of the French legacy, and enjoy the atmosphere. Also, Da Lat is surrounded by some of the best mountain biking, hiking and canyoning opportunities in Vietnam. Da Lat's high altitude of 1,500-2,000m and fertile landscape make it one among Vietnam's premium agricultural areas, producing a variety of fruits, vegetables and flowers that do not grow in the lowlands. In markets as far north as Hanoi, vegetables and flower vendors will tout their "made in Da Lat" produce. 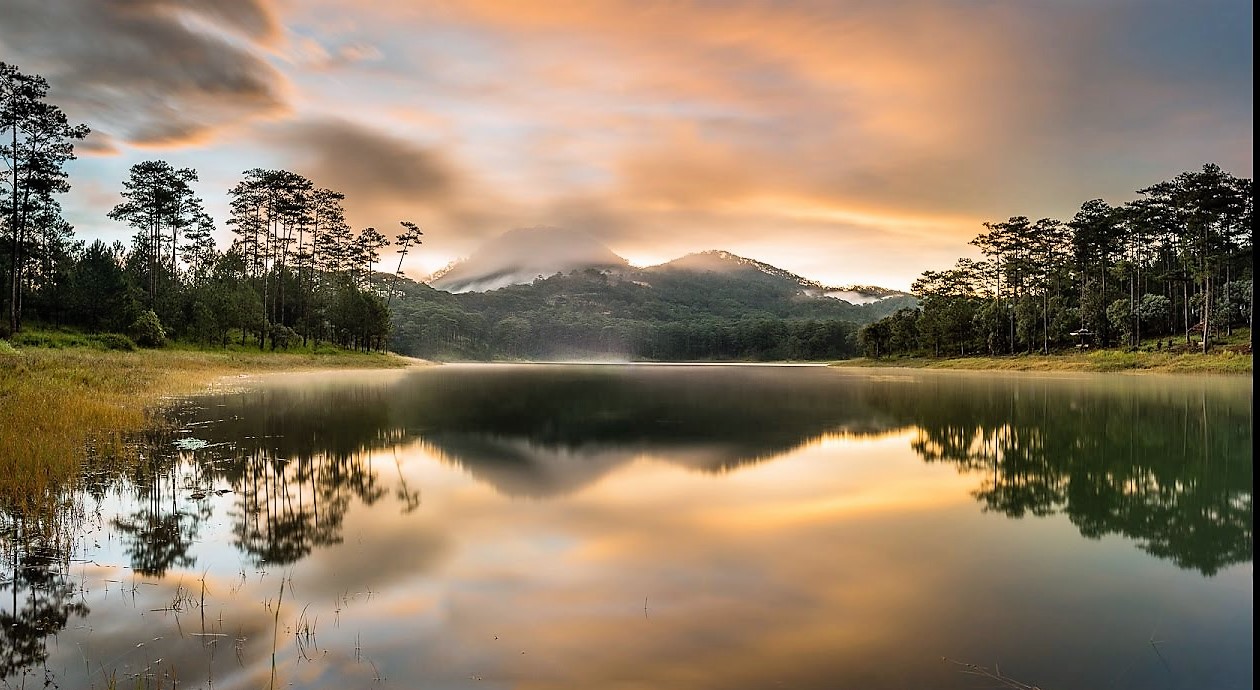 Whoever has come to Da Lat could never forget Xuan Huong Lake (Hồ Xuân Hương), which is located in center of town. Xuan Huong lake is now one of the main draws of Da Lat, and also where we can see honeymooners and locals strolling its banks. Side by side Xuan Huong Lake is Top-peg Hill (Đồi Cù), where has grown up a vast golf ground. If you are fond of fresh flowers, Da lat Flower Park is your accurate choice. The park, around 7,000 sq.m2, is situated on top of the Top-peg Hill, northern bank of Xuan Huong lake, and full of species of beautiful colored flowers to be extremely well-fed by planters. Tourists are all interested in the Da Lat’s flower festival, bringing them to a flowerfully fresh heaven!

For couples, Valley of Love (Thung Lũng Tình Yêu) is the premium place to go. Its special name derived from its romantic view of silence, grace and green. The other choice is Lake of Sorrow or Lake of Sighs (Hồ Than thở), whose name came from a tale of two lovers, one of whom committed suicide after the other was called up to serve in the army. The romantic and beautiful Tuyen Lam Lake (Hồ Tuyền Lâm) (the lake where rivers, springs and forests meet), Prenn Falls, or Pongour are also worth visiting for their beauty and fun.

On the other hand, Da Lat is popular for French-style architecture. Examples are King Bao Dai’s Palace, Ngo Dinh Diem and Nguyen Cao Ky’s villas, Hang Nga villas, and so forth. All of those should really be visited since they demonstrate the deeply special beauty and somehow culture of the old French.


- A striking, not-quite-finished fantasy house designed by the daughter of an independence war hero. Worth a visit if you are interested in architecture, or like Dr. Seuss-style surroundings.
- A set of flower gardens centered around a re-constructed traditional Vietnamese teakwood house
- A hill-top pagoda coupled with a brief cable car ride over the pine forest
- A ride in a land rover up to the top of Langbiang mountain, with nice views of Dalat and the surrounding mountains and valleys