China was such a strain for me, emotionally, after being scammed and cheated in Beijing and Shanghai, that I could have kissed the ground when I arrived in Hanoi.

05/10/2018 13:58
Chia sẻ
Arriving at 5.30am, I was pleased to be met on the platform by someone from my hotel and taxied there. Even at that hour, receptionist Lily Pham was welcoming and arranged for me to use another room to shower and rest while waiting for my room to become available.

Pham was both efficient and persuasive and while I was still bleary-eyed, I selected two trips – to Ha Long Bay, and the northern hill station of Sa Pa, famed for its rice terraces.

My first night coincided with the Mid-Autumn festival, with activities right at my doorstep. Pham advised against going out alone in the crowds for fear of snatch thieves. Thanks to the huge teak bed and my exhaustion from the long train ride from Nanning, I was out like a light despite the drums banging just below my balcony.

At breakfast, I met a fellow Malaysian named Usha Rani and her Singaporean friend Sarah Thong who warned me about grappling with the Vietnamese currency (Dong) with so many zeros (RM1 = VND5,300), which could lead to potential mistakes or even getting cheated when we made payments. Pham had already stated the acceptable prices for coffee so I knew what to expect. 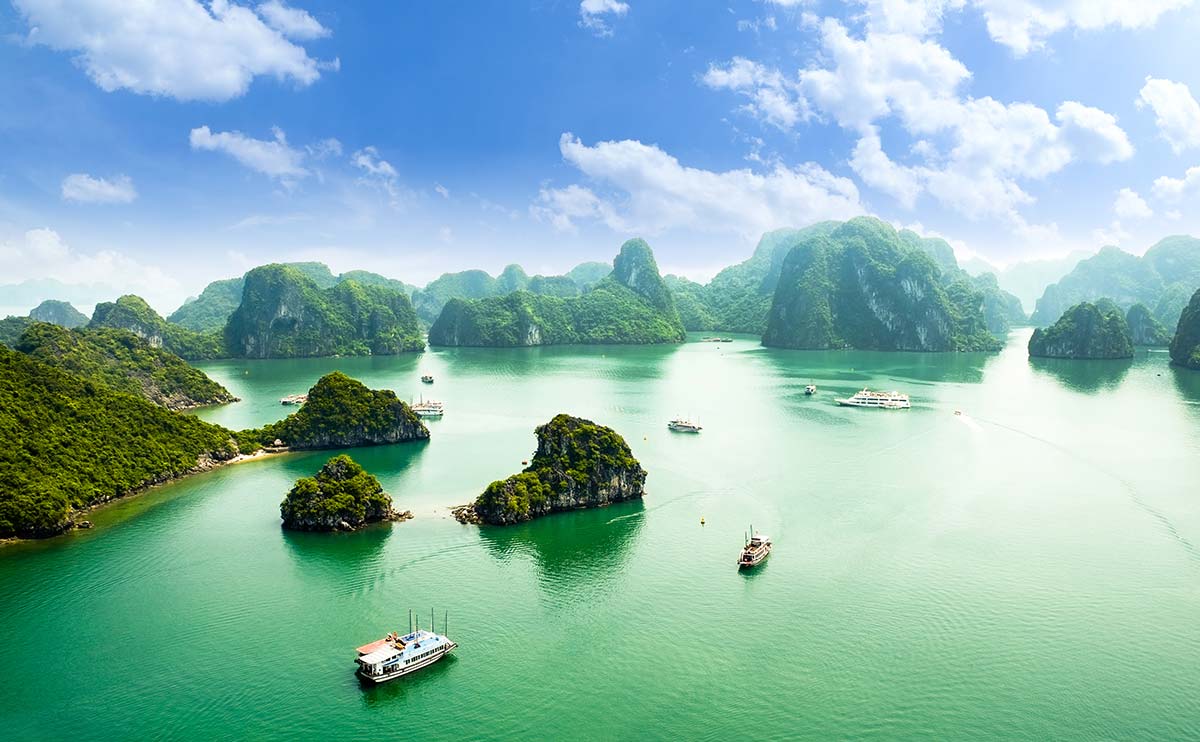 I saw longans being sold in the street and Pham told me it was RM4.70 per kilo but, when I enquired, they wanted VND100,000 Dong (RM19). It was the same price for a small papaya.

In the end, Pham got one of her colleagues to buy them for me. Malaysians complain so much about our country but those who travel will realise how wonderful Malaysia really is.

It took four hours by coach to Ha Long Bay, a Unesco World Heritage Site, in the Gulf of Tonkin, 180km from Hanoi. It consists of more than 1,600 islands and islets, which make for great photographs.

I opted to stay one night on the boat. There were only eight of us the first day. We had a good lunch on board and they even organised some meatless food for me. 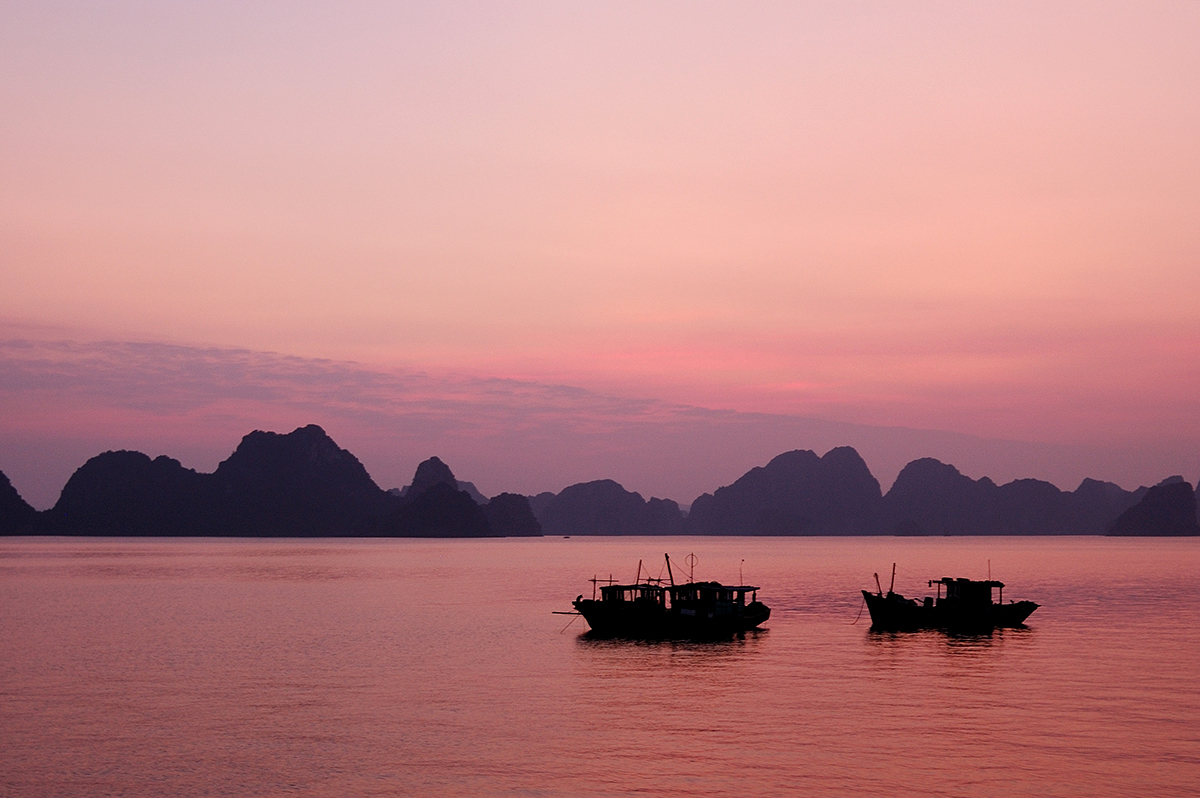 In the afternoon, we cruised around and set anchor in the open seas and did some kayaking.

Unfortunately, we had no coaching whatsoever and were just given life vests and lowered into the kayaks.

The others – three Aussies and a Canadian couple – seemed adept. I paired up with Su Go, a Taiwanese woman, who was also a novice. We followed the Canadian couple, Sebastien and Kristina, towards some limestone outcrops we thought we’d circle while staying close to the boat. When we got there, it turned out to be a solid wall so we had to carefully turn around.

It was extremely tiring as we hadn’t a clue about the proper technique of paddling and just wanted to “go home”. When we got to the boat, the whole area was filled with identical white boats. We didn’t even know the name of our vessel. While we were trying to search for clues, a small motorboat came towards us, creating ripples that started to rock our kayak. I panicked; neither of us knew what to do if it capsized.

As we got closer to the first boat, we realised the numbers of the cabins were different from ours and they didn’t have our yellow curtains, so off we went to the next boat.

When we finally found our boat, there was nobody on deck to help us up. We kept screaming for the guide: “Trang, Trang, we want to come up!” After what seemed like a long time, she appeared with the crew. 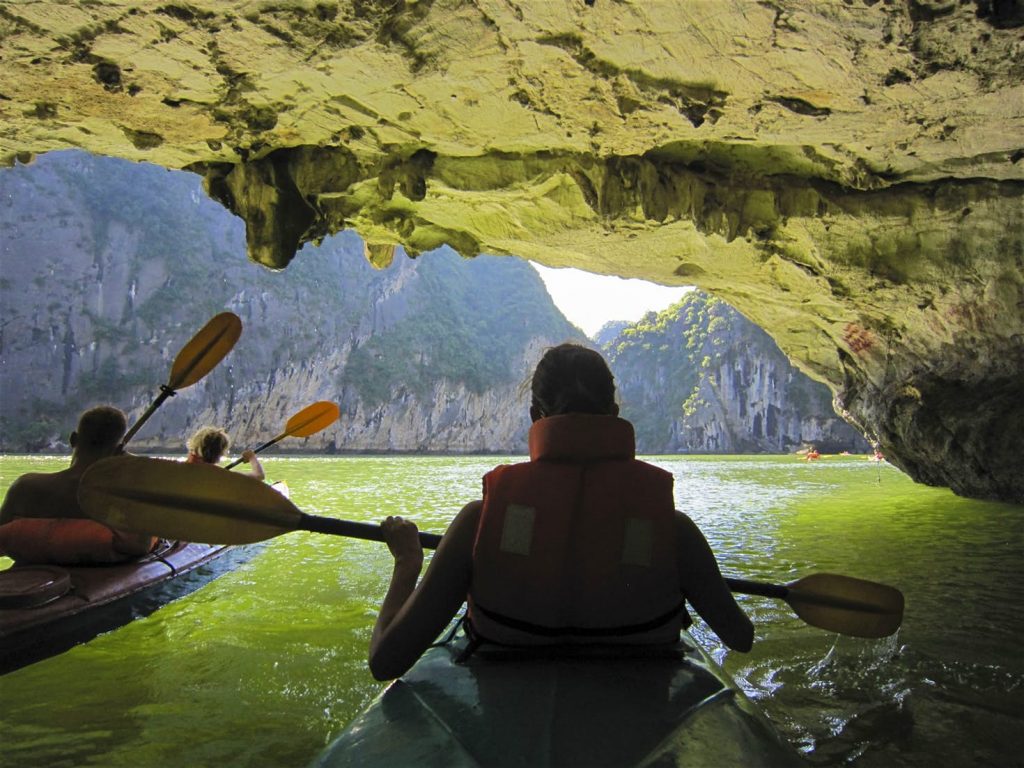 The next morning, we were joined by a group from another boat for a trip to the limestone caves, followed by a spring roll cooking lesson and lunch before we were deposited at the pier. Everybody went in different directions, leaving Su and me to ourselves. I was sad to lose our guide.

As we queued for the bus, a girl smiled at me and asked if I was from Malaysia (I was kitted out in my Harimau Malaya T-shirt.)

“Malaysia boleh!” shouted Adeline Wok and I, to her sister Alison’s amusement. There was a third Malaysian, KB Yeoh, from their boat. We all got on like a house on fire and decided to have dinner together at the Cha Ca La Vong restaurant in Hoan Kiem, which served a traditional grilled catfish dish bearing the same name.

They came to pick me up from my hotel, together with others from their boat. It was so nice to be pampered.

We were disappointed with the dish of tiny pieces of fish – marinated in turmeric and grilled at the table with some dill and spring onions – and served with rice noodles. So we adjourned to a café for ice cream. I hadn’t laughed so much since I started my odyssey, especially with Yeoh’s animated account of trying to use the toilet in the rickety train to Sa Pa. I had the same experience on the train to Saigon. 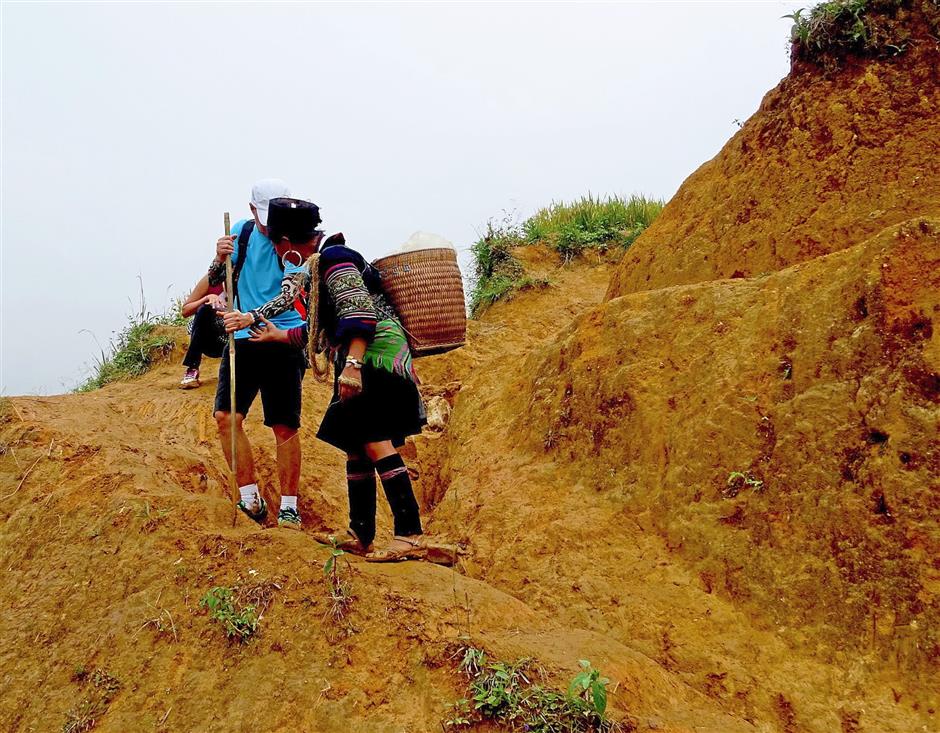 The next morning, I took a six-hour bus ride to Sa Pa, the 1,500m high former hill station of French colonials where the Hmong hill tribe predominates. We were given plastic bags to put our shoes in before boarding. As the sleeper bus went up the steep slope, we enjoyed panoramic views of the rice terraces.

After lunch, we went for a walk in the valley to see the rice terraces and the Hmong women doing embroidery and weaving. 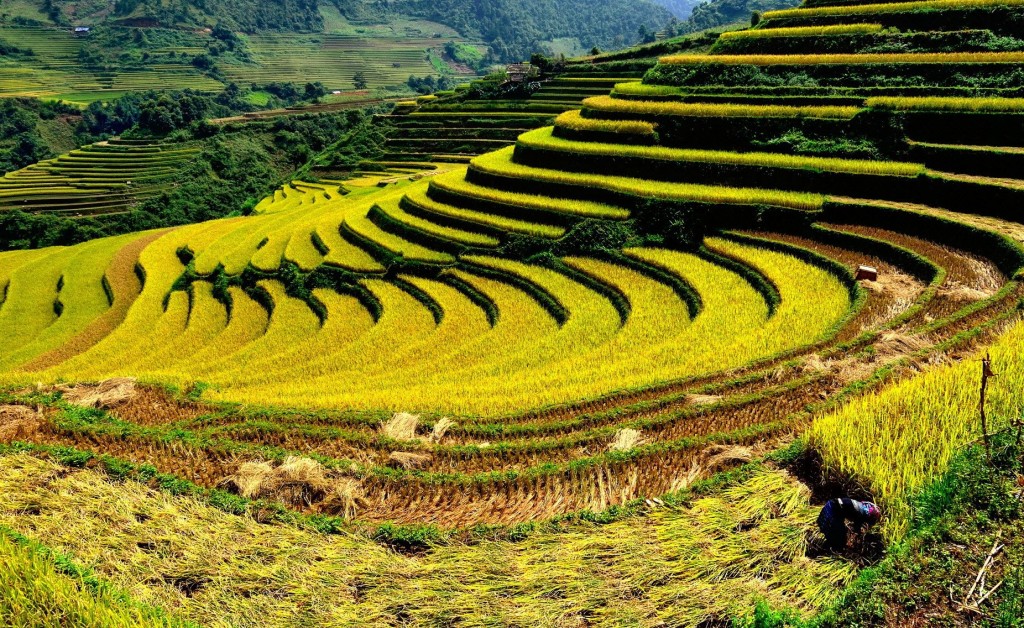 The next morning, it rained buckets before our trekking trip to the rice terraces. We were given ponchos to wear, so we carried on in the rain until it stopped. A group of Hmong women and little children were already on the steps waiting to follow us in the hope they could sell us something but I was amazed that they did not try to sell anything until we had reached the end of the trek.

The trails were all muddy and slippery. Wearing only slippers, a Hmong woman with a weather-beaten face came to my aid. Even the fit, young men were slipping all over the place! The Hmong children seemed to be able to bounce from one side of the slope to another with no trouble. 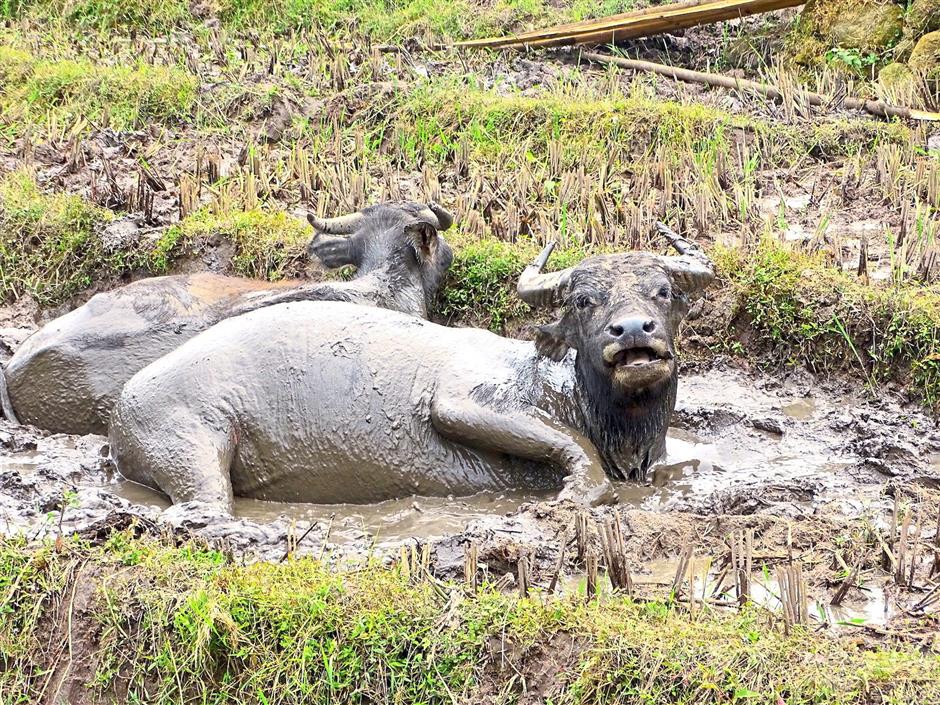 As soon as we reached a rest area, they started pleading with everyone to buy their friendship bracelets.

Some wouldn’t take “no” for an answer and continued stalking us. After a while, the whining became annoying and they had to be shooed away.

It was a hard trek over difficult terrain but to be up-close to the hill terraces made it all worthwhile.

Arriving back at my hotel in Hanoi that night felt like coming home. The staff were there to greet me like a long-lost relative. I stayed another three nights in Hanoi, finding it difficult to tear myself away from the comforts of my hotel. Who would have thought I would find peace and tranquillity in a hotel on the main thoroughfare of Hanoi’s busy Hoan Kiem district with its buzzing motorcycles?
Source Star2
Subject: Vietnam
Tag: Travel , Blissful in Vietnam , Vietnam