Home » News » Around the World » Top 10 Tourist Attractions in Myanmar

Myanmar is predicted to be one of the hottest travel destinations in 2017.

31/07/2017 16:12
Chia sẻ
And there’re many reasons for that, the development of tourism infrastructure, the more welcoming policy for international travelers including the integration of tourist eVisa that will facilitate the procedure for entering Myanmar. To give you a comprehensive overview of what should not be missed during your trip to this magical land, here are the 10 most famous tourist attractions in Myanmar.

1. Plain of the Old Bagan 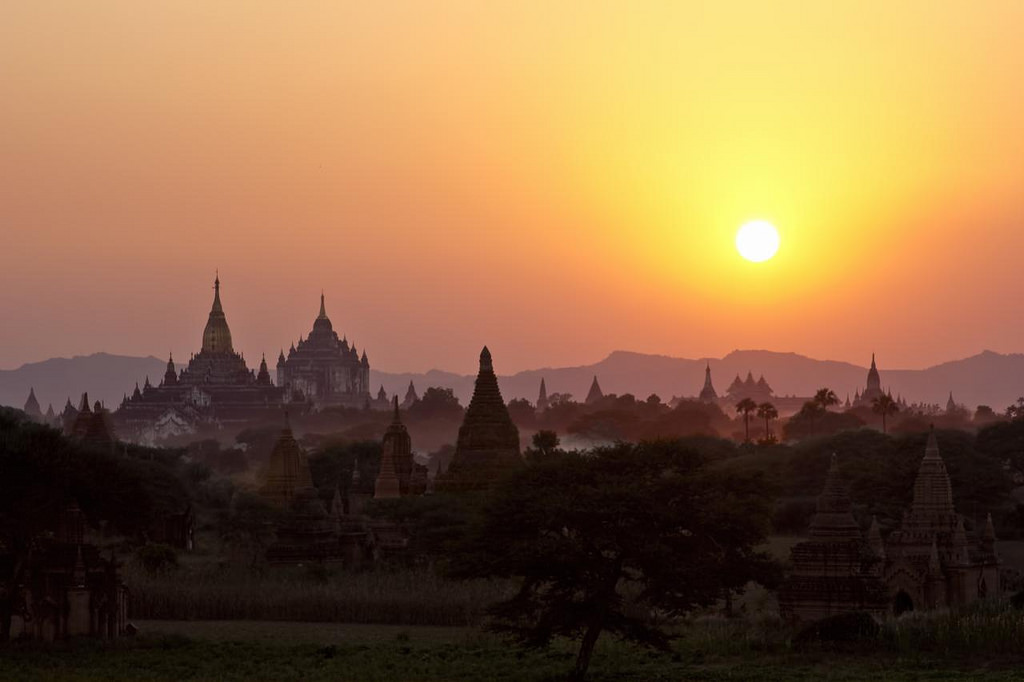 Often shortened as Bagan, this incredible archeological site sits at the top of our 10 places to go in 2017. Formerly an ancient city of Pagan Kingdom from the 9th to 13th century, there used to be over 10,000 temples, monasteries and pagodas dotting a plain area just a little bit larger than Manhattan along the Irrawaddy River. After hundreds of years, there are still 2200 or so temples remaining today. There are many ways to get around and explore Bagan, from walking, biking, motorbikes, tuk-tuks to a bumpy ride of traditional horse cart along the bumpy and dusty paths. But for a luxury tour to Myanmar, a hot air balloon ride over Bagan is something that should not be missed. 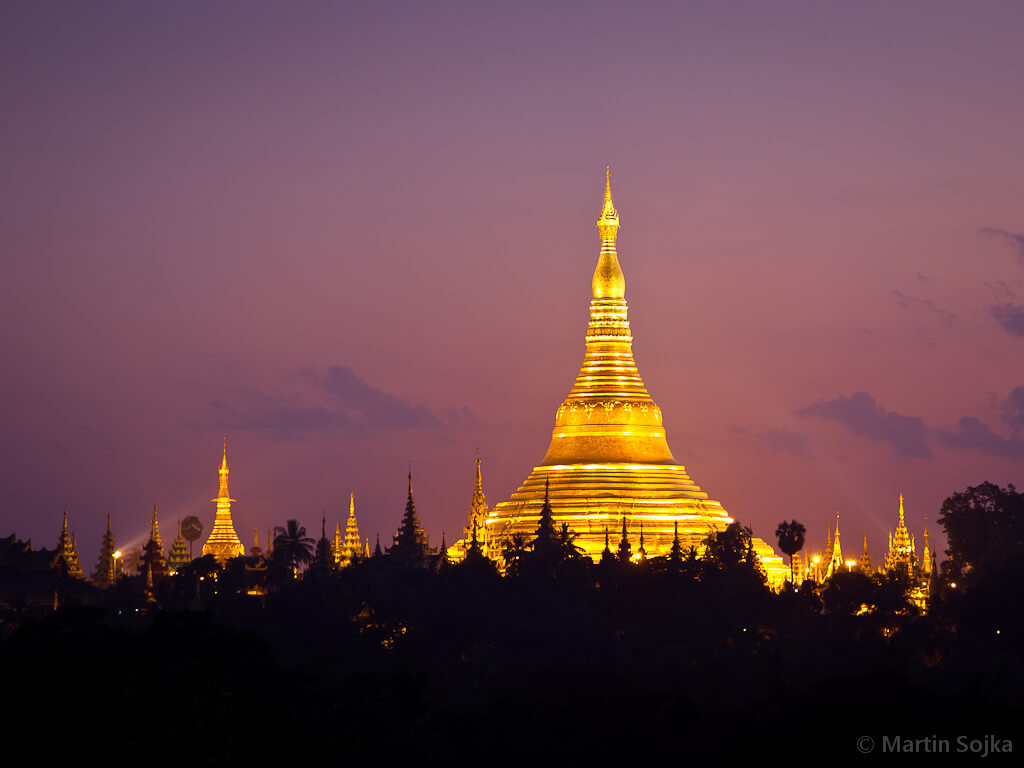 There can be one greater pagoda than The Golden Rock, and that is the fabulous 100-meter tall gilded stupa of Shwedagon in Yangon. Its size is so massive that the stupa is visible from almost every corner of the city, even at night. No trip to Myanmar is complete without a visit to the country’s grandest pagoda. The best time to visit Shwedagon is at dawn or sunset as it is less-crowded and the surrounding view is at its best. 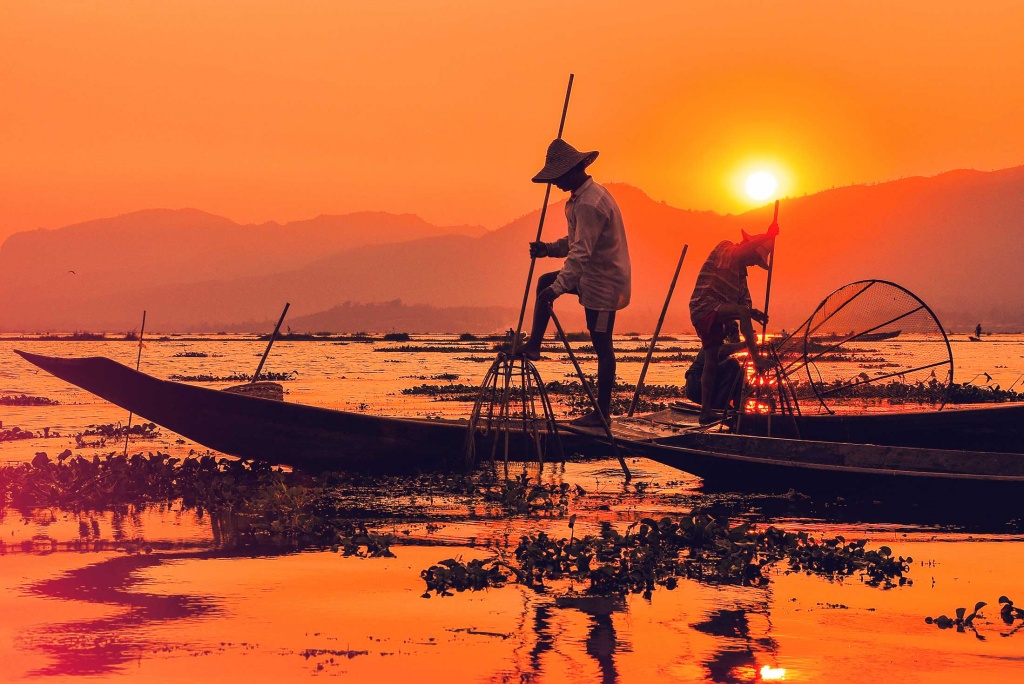 The only tourist attraction which is not a religious site in this list, Inle Lake is a great place to find tranquility and relaxation while in Myanmar. But if you’re bored of just laying back, there are lots of fascinating activities here, such as taking a boat ride, kayaking whilst gazing at the one-leg rowing fishermen, joining a cooking class at a local house or visit a local market at dawn. Apart from that, Inle Lake is an ideal choice as a base for exploring other famous sites in Shan State such as number 10 and number 9.

4. Kyaiktiyo Pagoda or The Golden Rock 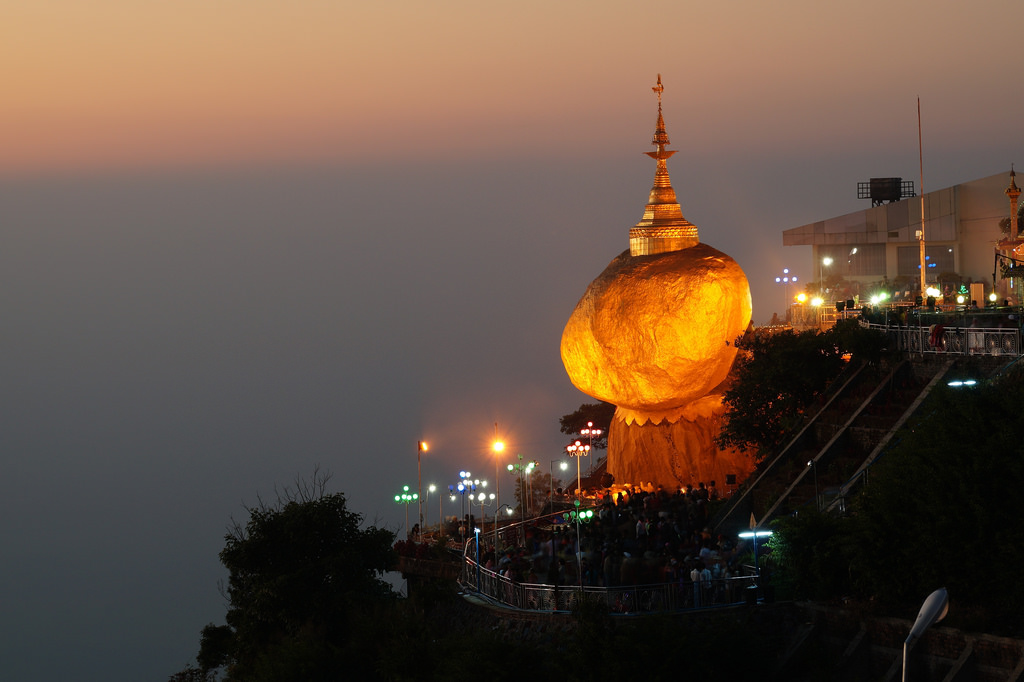 Kyaiktiyo Pagoda can be regarded as one of the most bizarre religious structures in the world. This “gravity defying” gilded rock is one of the most sacred pilgrimage sites in Myanmar. For anybody who follows Buddhism, a visit to Kyaiktiyo Pagoda is considered a great privilege. And just like Mount Popa, the view up here is absolutely spectacular. 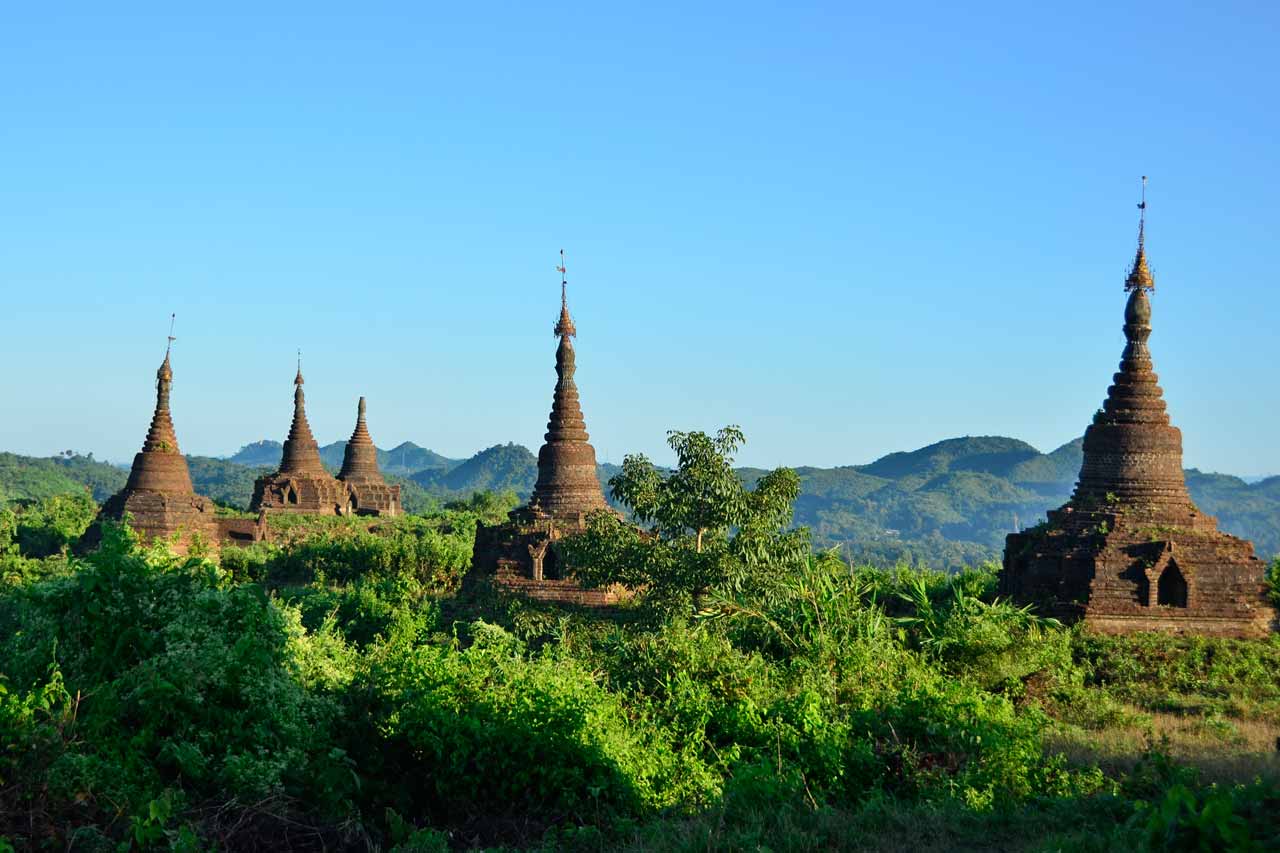 Many people, even Burmese, refer Mrauk U to as “Little Bagan”. While both are two of the most famous archeological sites of Southeast Asia, Mrauk U is unique in its own way. First, while the stupas in Bagan were built by brick, the walls of structures in Mrauk U were made of thick stone to cope with the fierce winds. Secondly, the ruins here are in the middle of an inhabited site. And the third difference, unlike Bagan, Mrauk U is still a less-visited site, hence a perfect for getting off the beaten path in Myanmar. 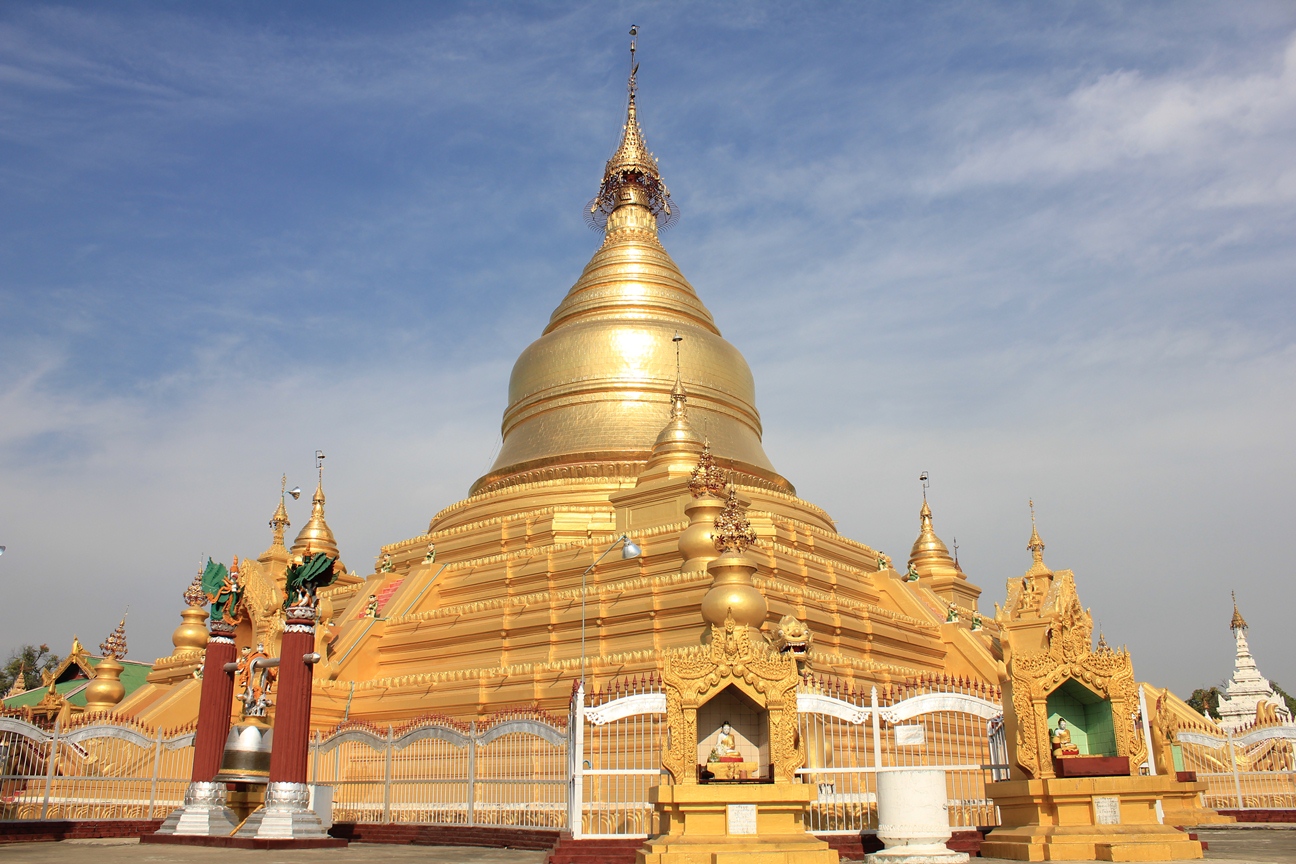 Another site that was built at the foot of the Mandalay Hill by King Mindon Min, Kuthodaw Pagoda is famous for containing the world’s biggest book, which is a complex of 729 stone-inscription stupas. Within the site, there is also an enormous 57-meter tall gilded stupa that is modeled after Shwezigon Pagoda near Bagan. Mount Popa is a popular day trip from Bagan. On the peak of a 1.500-meter tall mountain, a stunning gold stupa stands out as it can be seen even if you are on a river cruise of the Irrawaddy which is some 60 kilometers away. To be able to enjoy the spectacular view of the surroundings from the stupa, it takes you 777 steps with your bare foot. 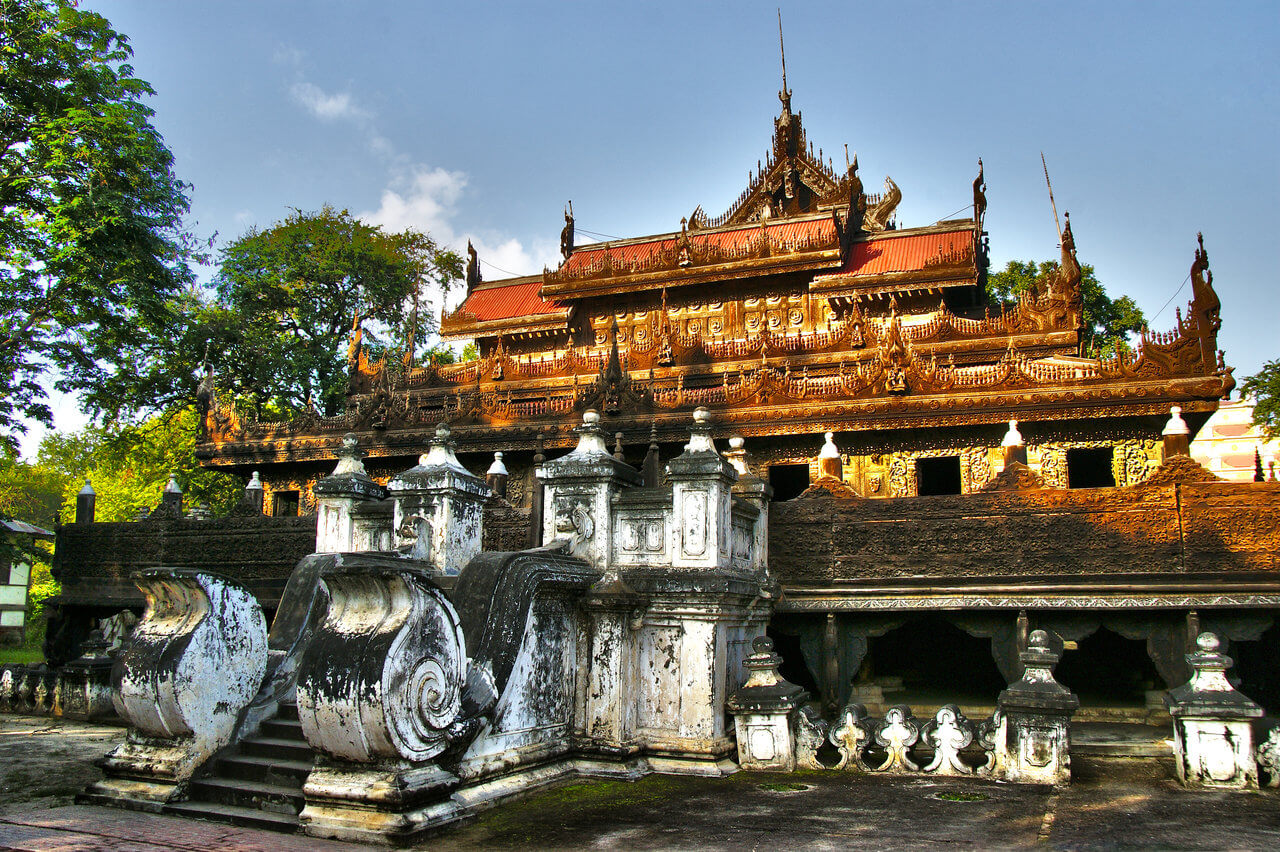 Located near the Mandalay Hill, the Shwenandaw Monastery used to be the royal apartment of King Mindon Min, who died inside it in 1878. 2 years later, this fine teak building was dismantled by his own son, King Thibaw Min, who believed that it was haunted by his own father’s spirit. However, it was reconstructed 5 years later, this time as a monastery. Shwenandaw Monastery is a typical display of Burmese traditional architecture, a must-visit for the history buffs traveling to Myanmar. 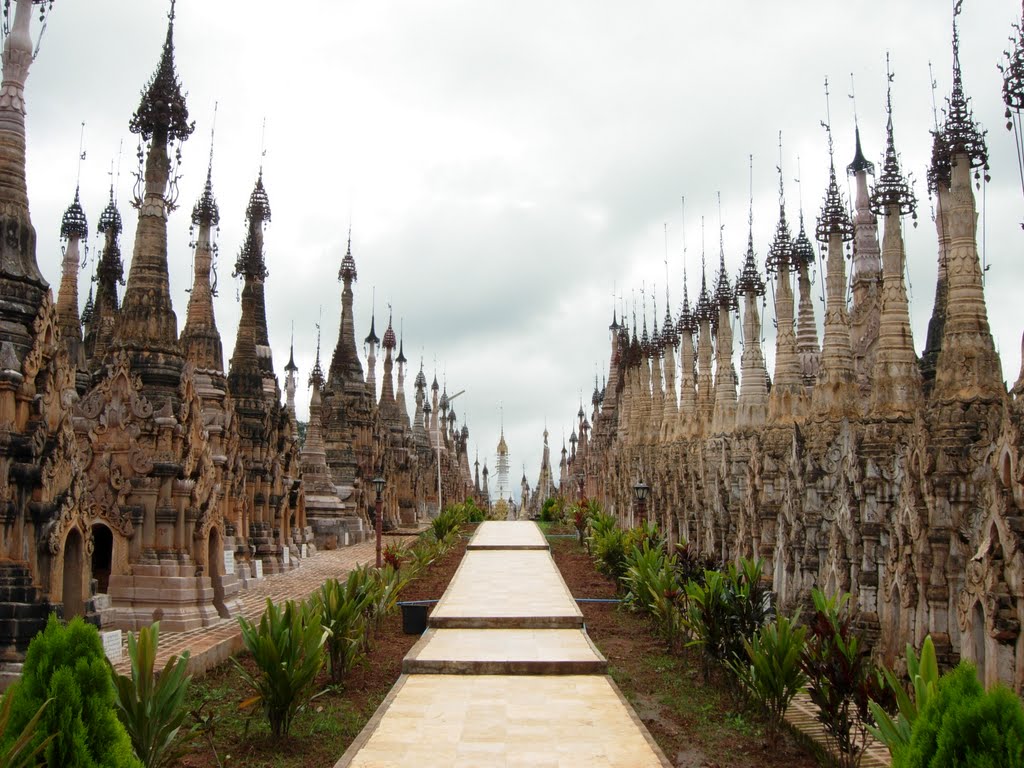 Imagine being teleported to the middle of the pagodas of Kakku, you will surely be astonished by the mazes of surrounding stupas. In such a very compact area, there seems to be a countless number of well-preserved stupas, most of which are almost 500 years old. In Kakku, you will get the feeling of being thrown back into the past. 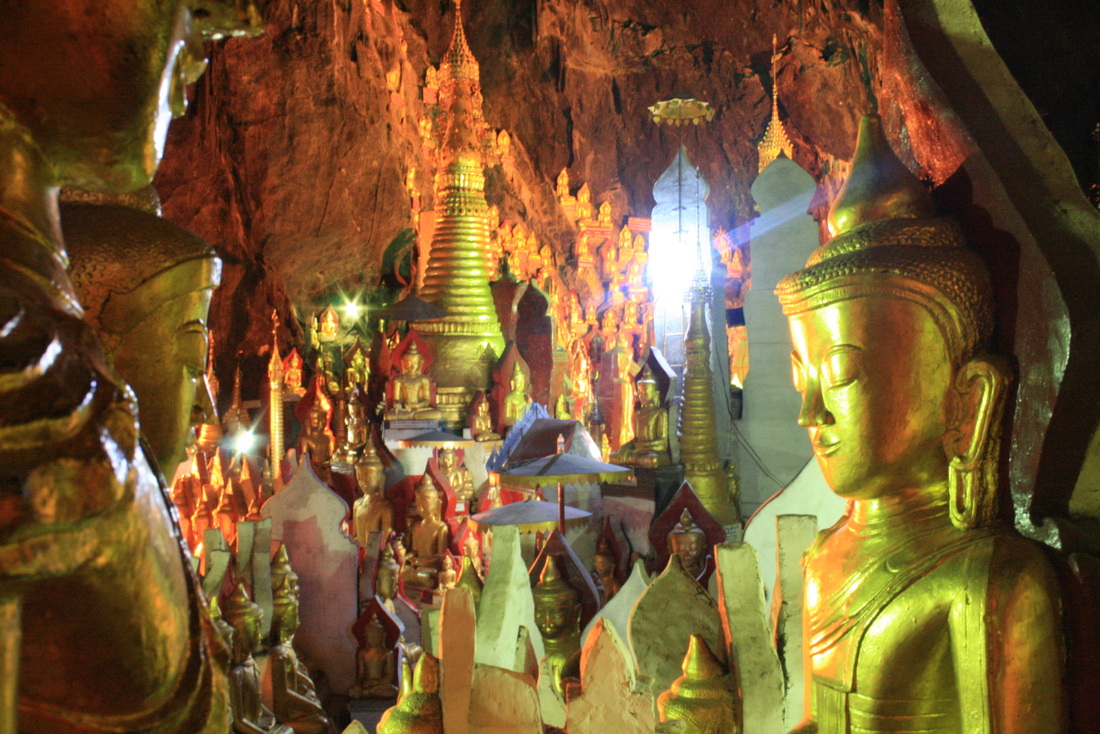 Located on the outskirt of Pindaya town in Shan State, Eastern Myanmar, this is a sacred pilgrimage site. Sheltering inside the dark and deep natural cave, there are hundreds of Buddhist statues and statuettes, with the oldest dates back to 1773. Legend has it that if you follow them until the other end of Pindaya Caves, you will be led to the ancient city of Bagan that is hundreds of kilometers away to the west.