07/10/2019 14:50
At peak times, the hypnotic pace of the changing traffic light seems to signal the masses into a mesmerizing, yet claustrophobic, waltz. For many, the controlled chaos of Shibuya's "Scramble" epitomizes the efficient madness of the cutting-edge city. Here, 10 lanes of traffic and five major crosswalks converge along a modern canyon of neon-colored buildings in the heart of Tokyo.

The Shibuya Crossing serves as center-stage for a Times Square-inspired New Year's Eve countdown, and is the focal point for the wild Halloween celebrations that have grown increasingly famous in recent years.

Its popularity is easily explained. Along with Shinjuku Station, the district's Shibuya Station bears the honor of being one of the world's busiest train stations. Connecting to popular areas such as Shinjuku, Harajuku and Roppongi, it's virtually impossible to bypass Shibuya on a visit to Tokyo, or even a trip across town. And you wouldn't want to, anyway. 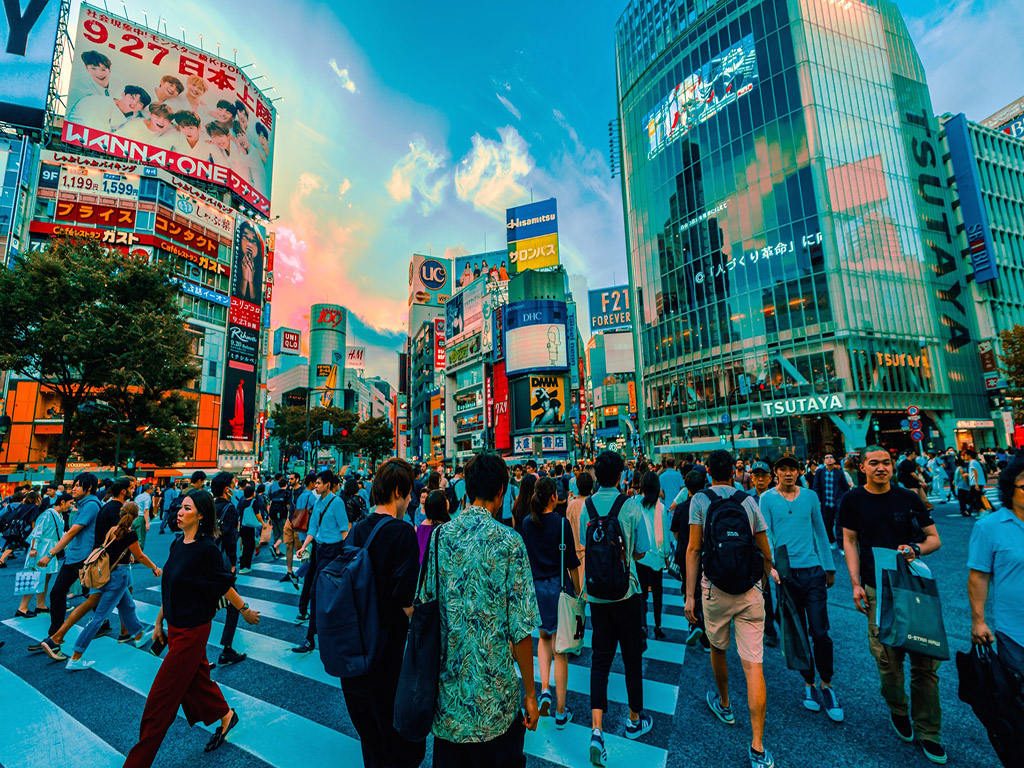 Movie buffs will appreciate the fact that "The Fast and The Furious" famously slid through the technicolor crossing in the movie series' third installment "Tokyo Drift."

Scarlett Johansson and Bill Murray fans may remember the "Lost in Translation" film scene featuring a sea of clear umbrellas overtaking the intersection. And in the Japanese cult-classic "Battle Royale," the crossing stood as a futuristic cityscape in the flick.

Models, and those who would be, strut through the crossing as if on a personal catwalk. It's not uncommon to spot a mascot shimmying across, and there always seems to be a heat of MariCar racers zipping by. It's both a place to see and be seen.

Even during major events like Halloween, the street remains functional, with officials squeezing people onto the sidewalks with retractable ropeways. No matter how busy, traffic at this massive intersection is rarely congested. Emergency vehicles even make their way through rush hour crossings with ease.

In the lead up to the 2020 Olympics, the area has seen significant development and an ever-expanding skyline. The crossing itself undergoes near daily upgrades, with newer and more impressive video boards constantly vying for the attention of passersby.

There are no fewer than five major screens with video and audio impressively synced to each crossing, displaying information such as the weather forecast, during red "no walk" signals, and often cartoons when the green "walk" signal lights up.

The world's most loyal dog 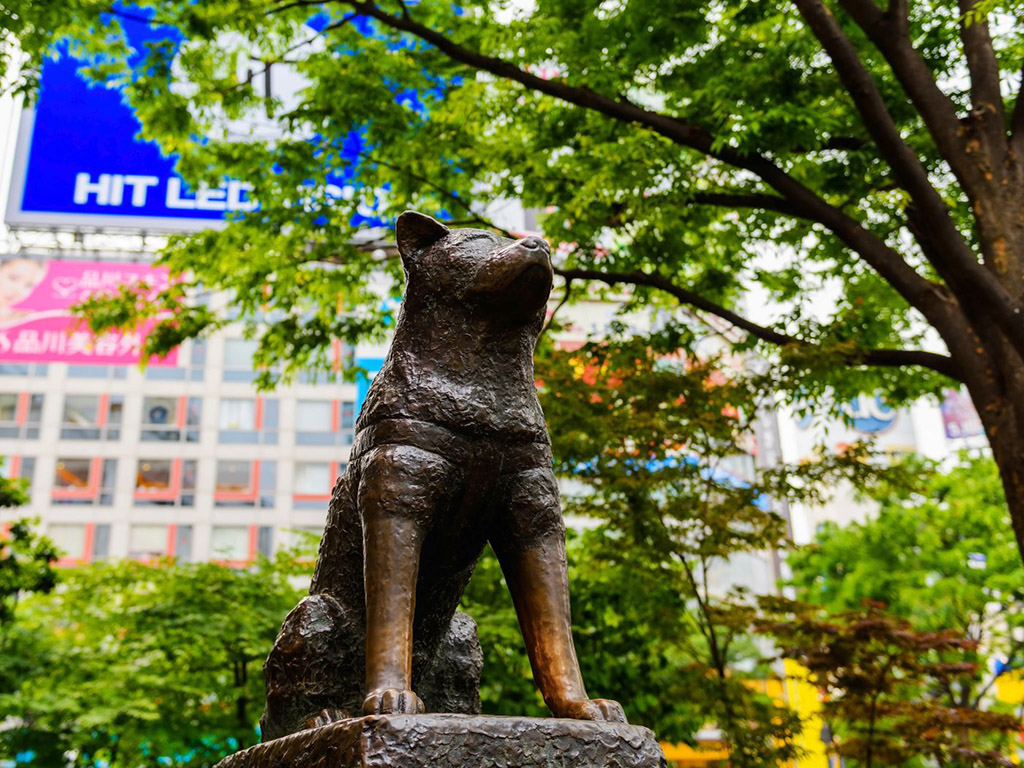 Even though the crosswalk can be a dizzying place, there's one landmark everybody knows: a famed meeting spot epitomized by a legendary, loyal dog.

Hachikō the dog was an akita who would meet his owner Hidesaburō Ueno at the Shibuya Station after work every day in the 1920s. When Ueno died unexpectedly, Hachikō continued to visit the station every day for almost a decade.

His loyalty has become revered in Japan where he is known as chūken Hachikō or "faithful dog Hachikō," and the breed is especially popular in the district.

Today, a near constant line of visitors waits outside the station's exit named for him to take photos with a bronze statue of Hachikō, sometimes offering a wreath of flowers in the summer or a hand-knitted scarf during the colder months.

(Hachikō was still alive and present for the statue's initial unveiling in 1932, but that model was recycled for the war effort, and the current statue is a 1984 remake.)

Even the district's buses and vending machines are adorned with his smiling puppy face, and there's an official Hachikō mascot who frequents the area. 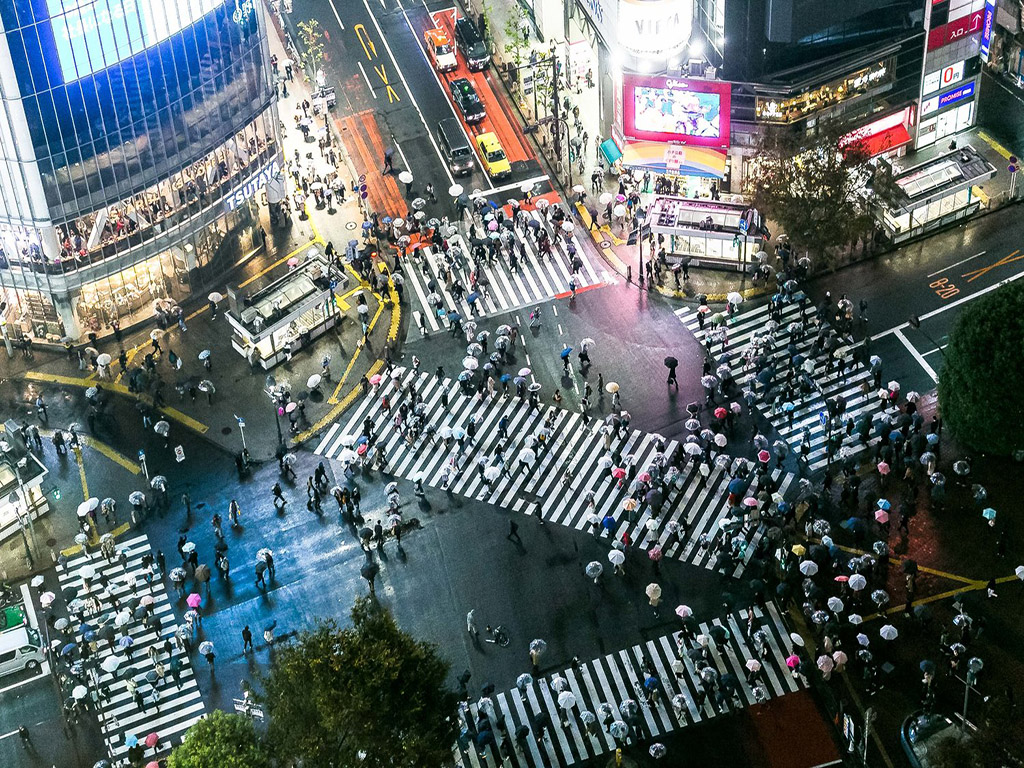 One of the images most associated with Japan is a bird's eye view of the frenetic crossing. It's a highly sought after image but can be challenging to obtain.

By far the most popular place to snap photos is shopping mall Magnet by Shibuya 109's 7th-floor viewing platform. Standing directly over the crossing, it offers the most immediate angle.

The deck is equipped with a camera that, for a small fee, can sync to a visitor's smartphone to take selfies from above. The platform is not accessible for baby carriages or wheelchairs.

While the crossing isn't directly visible from train platforms, a bridge in Shibuya Station over the street offers a unique side-perspective, and it's the easiest to access. That area of the station doesn't even require a ticket purchase.

A cross-hatch design in the windows makes it a little more difficult to capture the perfect photo, but with ample space and indifferent commuters, it's an easy place to stake a spot.

The Shibuya Hikarie building, which houses offices, shops and theaters, is one of the best places to take in a wider view of the district's full action.

A couple blocks from the main crossing, this taller viewpoint on the 11th floor gives an expansive sight of the crossing over the train station. The comings and goings of the trains add another layer of complexity to the endless rush hour below. Though not an official viewing platform, it is accessible and open to the public. 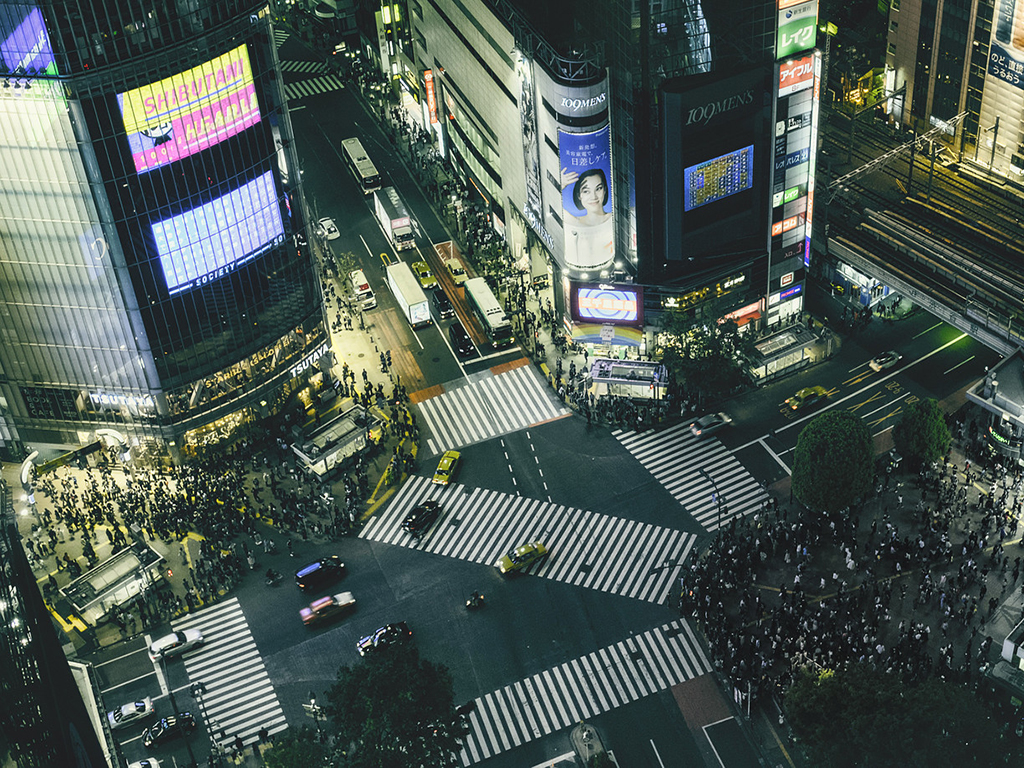 The Shibuya Excel Hotel Tokyu boasts the grandest take of the crossing itself, with complete views of every corner. Officially, it is only open to guests of the hotel, but given the popularity, it has been allowed to patrons of the hotel's 25th floor restaurants.

Soon all these will be in the shadow of the Shibuya Sky, a new 47-story skyscraper. The tallest in Shibuya, its roof deck will feature a 360-degree platform from which to survey the entire district, including an even more direct view of the crossing.

When it opens in September 2019, it will surely be one of the area's most popular attractions.

But the best place to connect to the spirit of the Shibuya Crossing is the street itself. In the span of just a few crossings an impromptu limbo line may break out, even a dance-off could go down. There's a sense of wonderment from the glowing neon, and a connection in the energy among the people.

The Scramble is a place to get lost, meet up and feel the heartbeat of Tokyo.