Home » News » Around the World » Best Cultural Attractions In Laos

Laos is an up and coming destination on the South East Asian tourist trail with many travelers attracted to this landlocked country due to its laid back lifestyle and stunning mountainous landscapes.

17/11/2017 14:42
Chia sẻ
From saffron-robed monks receiving alms to golden stupas, explore the best sites and attractions that Laos has to offer. 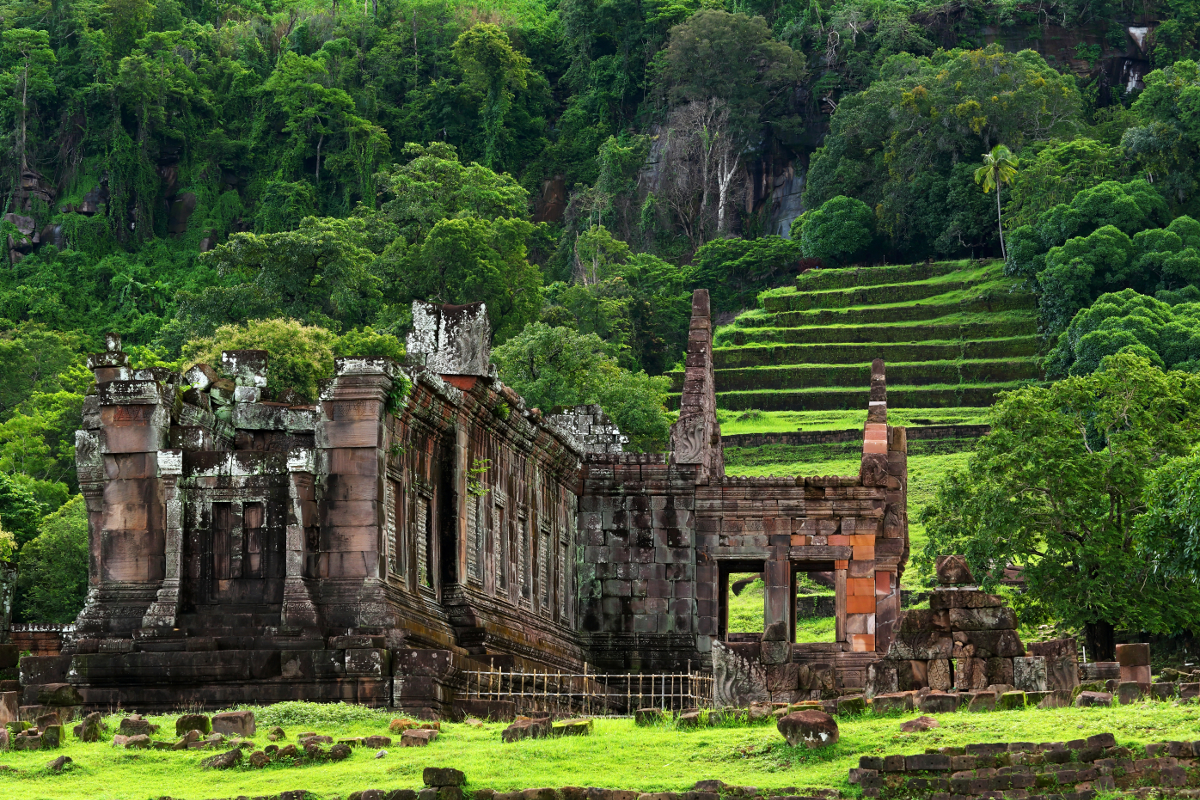 Vat Phou or Wat Phu is a ruined Khmer temple complex spread over the lower slopes of Phu Pasak in southern Laos. It is considered to be one of the oldest archaeological sites in Laos. One temple in the site was constructed around the 5th century but most buildings found in the complex are from the 11th to 13th centuries. Wat Phu is small in comparison with the monumental Angkor sites in Cambodia, but older, earning itself the title of a World Heritage Site by UNESCO in 2002.

Outstanding views are visible on the site due to its hilltop location — offering stunning views over the surrounding land and Mekong River. This landscape was planned at the beginning of the past millennia and was shaped to express the Hindu vision of the relationship between nature and humanity. Like other notable Khmer architecture in Southeast Asia, the site was constructed using laterite, sandstone and bricks. The sense of craftsmanship and history runs throughout the site. Visitors will be amazed by the magnificent workmanship involved within the ruined Khmer temple complex, especially the phenomenal carvings that decorate the walls.

Open all year round, visitors can travel to Wat Phu from Pakse via land or by boat along the Mekong River. 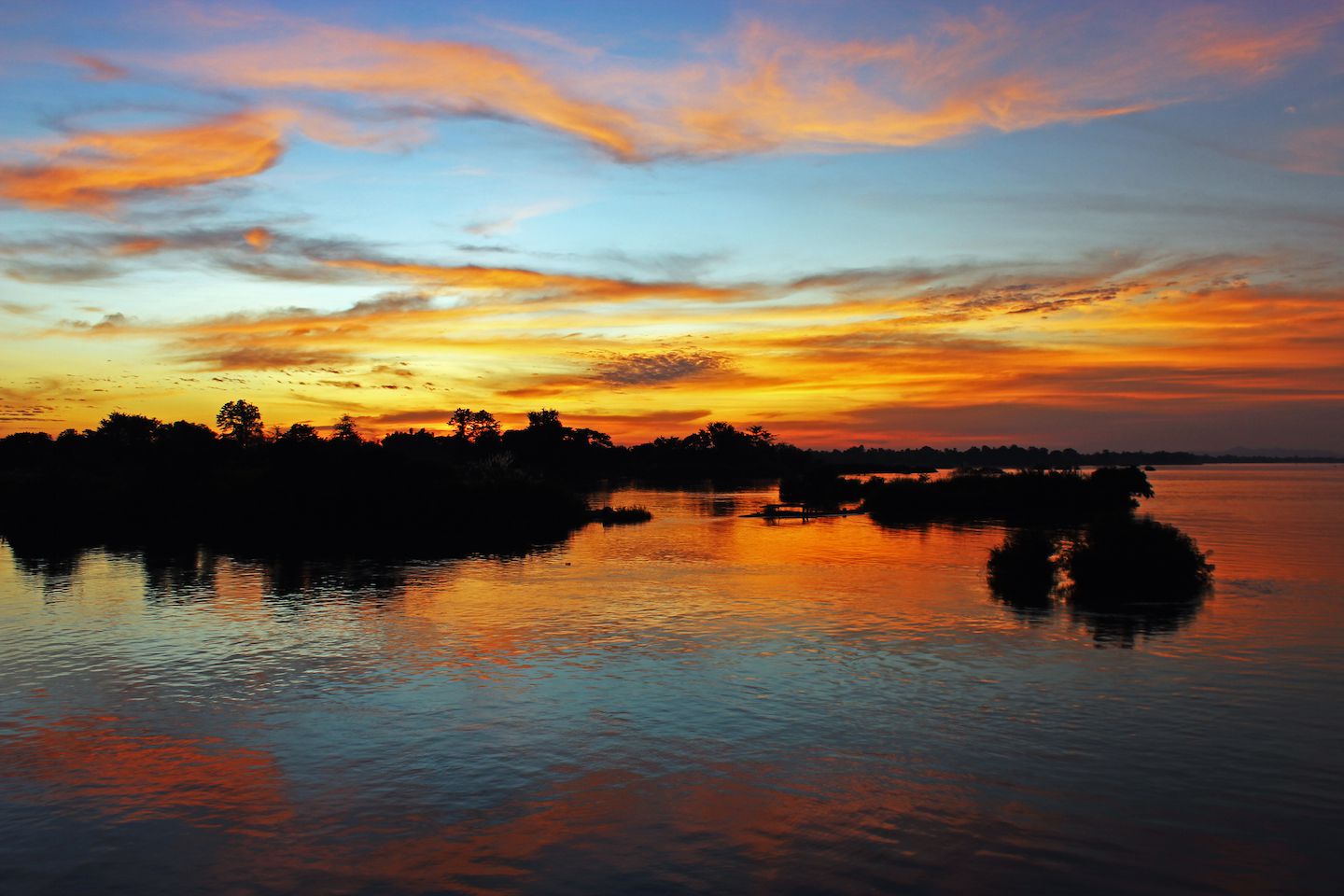 Si Phan Don roughly translates from Laotian as ‘Four Thousand Islands’. This scenic 50-kilometer stretch along the Mekong River is located just north of the Cambodian border. During the rainy season, the river reaches a colossal breadth of 14 kilometers (the widest width of the Mekong along its length from China to Vietnam); and in the dry season, the waters recede and leave behind thousands of islands and islets.

Accommodation is based mainly on the two island groups — namely Don Det and Don Khon. The largest islands are inhabited all year round and offer travelers a real insight into rural life along the Mekong River. The residents are almost completely self-sufficient and grow most of their own food such as sugar cane and rice. Being close to the Cambodian border meant that the duo of islands became an important link for the stream of supplies between Vietnam and Laos during the French colonial era. Here you can still find the only remaining stretch of railway ever built in Laos, which was used by the French to bypass the nearby system of rapids and waterfalls that forbid navigation. On both islands there is a growing number of basic guesthouses as well as more comfortable accommodations.

The lush scenery, vast waterfalls and untouched natural ambiance makes Si Phan Don a destination for travelers and locals alike. Many stop off at the collection of islands before journeying into Laos proper or down to Cambodia. If you find yourself in Si Phan Don, be sure to hire a boat to Lee Pi Waterfalls in order to catch a peek at the endangered Irrawady Dolphin. If you don’t manage to spot this elusive mammal, then the very impressive Khon Phapheng waterfall is nearby, offering a momentous view of the biggest cascade along the Mekong River. 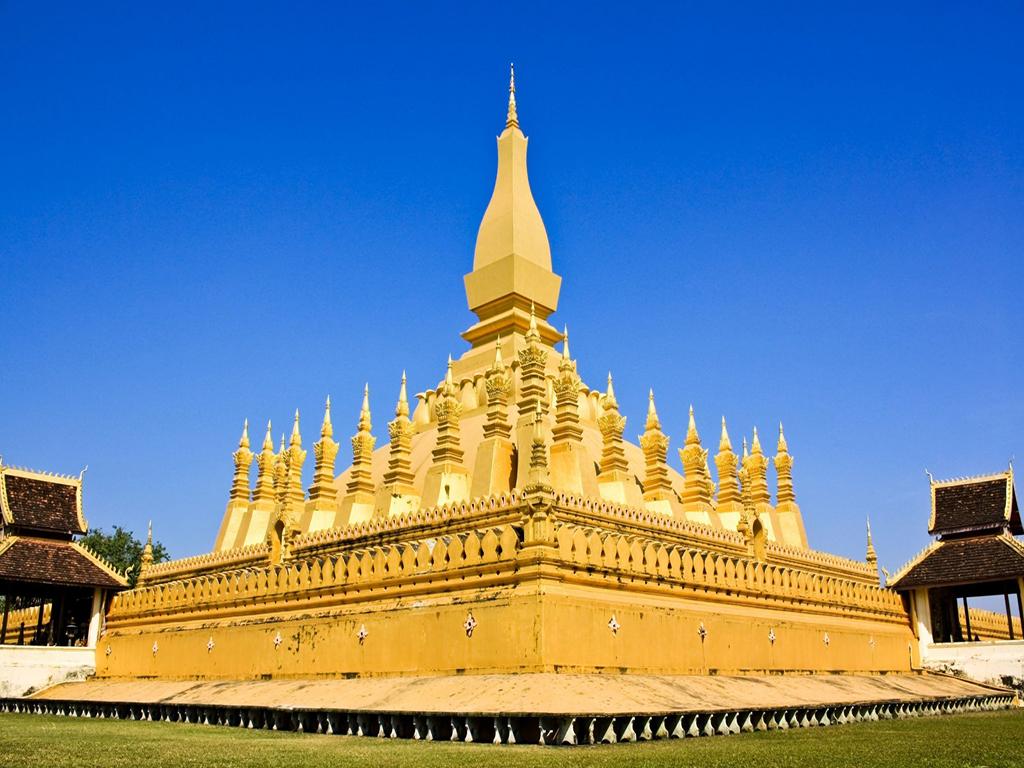 Pha That Luang is a huge gold-covered Buddhist stupa in the center of Vientiane, and is generally considered as the most important national monument in Laos. Since it’s initial establishment the stupa has undergone several reconstructions, especially since the invasions of the area in the 1930s. Built in the shape of a grand pyramid, the stupa measures approximately 69 meters long and 45 meters high, and is encrusted with thousands of pounds worth of gold leaf. The Buddhist temple is located next to the Laotian Parliament, and is clearly seen from the top of the Patuxai Arc in downtown Vientiane.

Built in the 16th century under King Setthathirat, legend states that Asokan missionaries enclosed a piece of Buddha’s breastbone here in the 3rd century BC. Pha That Luang holds a special meaning in Laos since the temple affirmed itself as the symbol of the Laotian nation in 1991. The change from the previous symbol of a hammer and sickle to an iconic piece of Buddhist architecture symbolized the perseverance and generosity of the Lao people.

If you visit Pha That Luang in November, make sure to schedule it around the largest national holiday in Laos -— the That Luang Festival. The celebration occurs over three days during the full moon of November (the twelfth lunar month) and people from all over Laos congregate to rejoice in the occasion. A procession begins at Wat Si Muang in the city center, and makes its way to Pha That Luang. Many people make offerings to the monks to accumulate merit for rebirth into a better life. The religious element of the ceremony concludes as the people carry incense or candles, and circle Pha That Luang three times in the Buddha’s honor. Festival entertainment includes both traditional and popular music along with several dramatic performances. 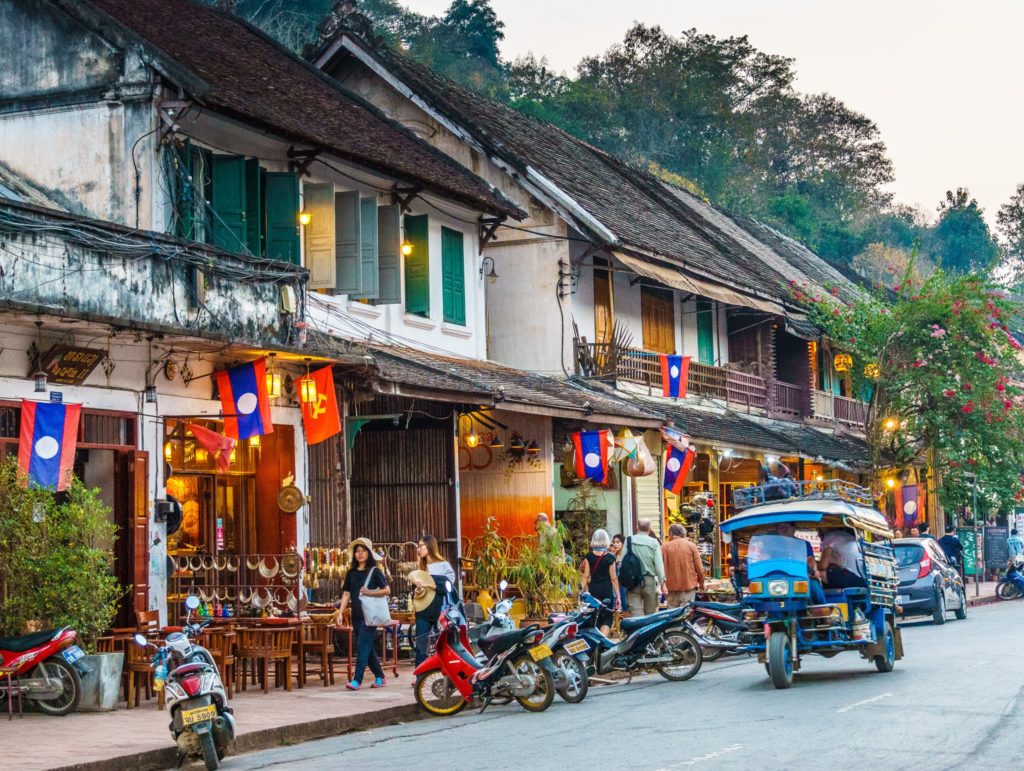 The delightful city of Luang Prabang (once the capital of Laos) is considered to be the spiritual heart of the country. Blending a rich meld of French and Indochina architecture, the area is an outstanding example of the fusion between traditional architecture and Lao urban structures; especially those built by the European colonial authorities in the 19th and 20th centuries. The incredibly well preserved townscape illustrates a key combination of two distinct cultural traditions, and earned its reputation as a UNESCO World Heritage site in 1995.

The tiny town is encircled by mountains and sits 700 meters above sea level at the confluence of the Nam Khan and Mekong Rivers. Arguably Southeast Asia’s most beautiful spot, it does attract tourists and consequently higher prices than anywhere else in Vientiane. The most popular attractions of the area include Kuang Si Falls, Pak Ou Caves, the Haw Kham Royal Palace Museum and the Wat Xieng Thong temple. The city is also well known for the large amount of wats (Buddhist temples) and monasteries. Be sure to see the hundreds of monks from the various monasteries who walk through the streets every morning collecting alms. 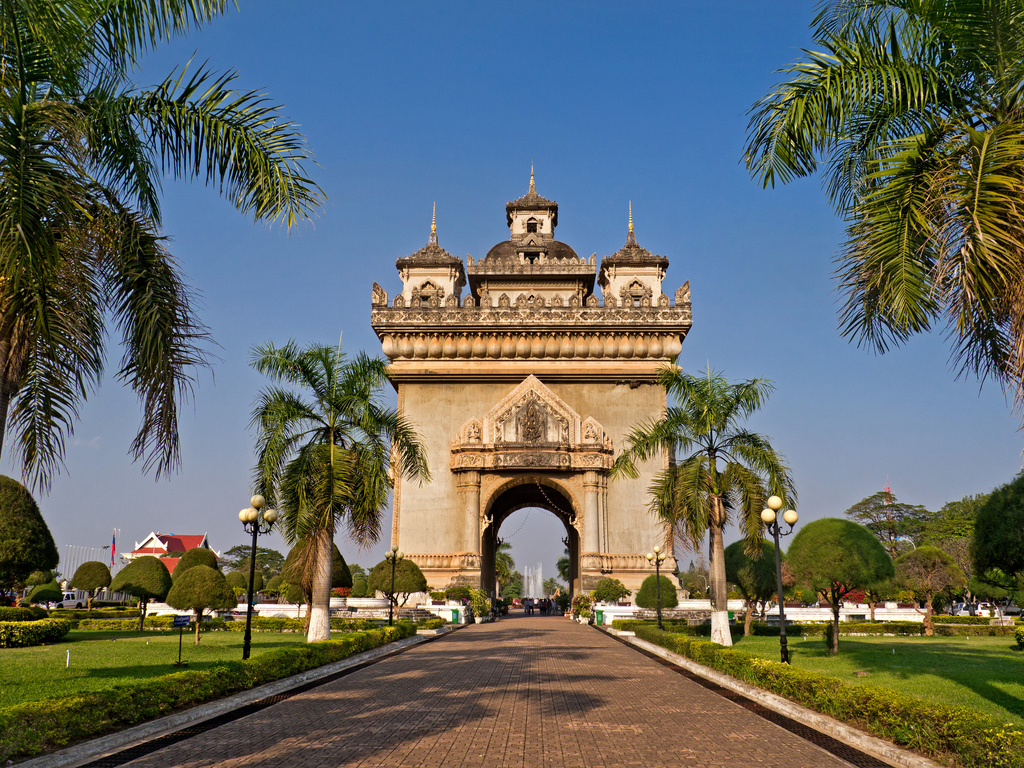 Patuxai or Victory Monument is one of the most recognizable landmarks in Laos and a distinctive figure on the Vientiane skyline. Situated at the end of one of the capital’s grandest avenues, the large square arch is very much reminiscent of the Arc de Triomphe in Paris. Forming the centerpiece of Patuxai Park, the monument is dedicated to the Laos people who were killed in the fight to gain independence from France, as well as the nation’s earlier occupiers, Japan And Siam. Patuxai serves as a monument to honour Laos’ resilience and eventual independence, paying homage to its national culture and traditions.

The exterior embellishments feature symbols of the Buddhist religion including stupa-shaped towers and lotus leaves along with statues of nagas (dragons) and animist kinnari (half-female and half-bird figures). The interior is also decorated with walls and ceilings painted with gods, goddesses and elephants. For a modest fee, you can also climb to the top and enjoy a panoramic view of the Vientiane with its hundreds of trees, low rise buildings and temples, all the way across the Mekong River to Thailand. The park surrounding Patuxai is also exceedingly pleasant with flower gardens and fountains. 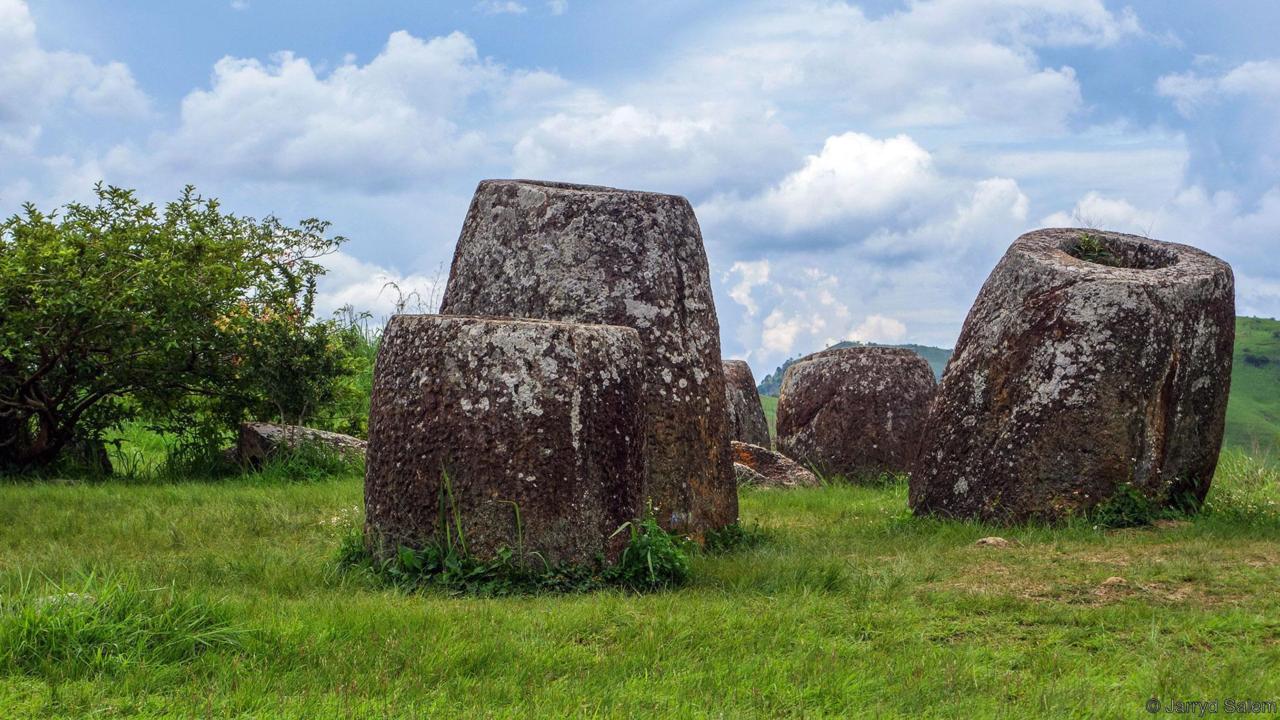 Located in central Laos, the Plain of Jars is one of Southeast Asia’s most mysterious and misunderstood prehistoric places. Approximately ninety sites scattered across many miles of rolling landscape contain thousands of large stone jars, each weighing several tons. The archaeologist Julie Van Den Bergh has counted over 3,000 jars scattered across 90 sites thus far. Each jar is up to 3 meters tall and weighs several tons, often made of sandstone, but also of harder granite and limestone. Despite great investigation and efforts from many archaeologists, the reason and origin of the Plain of Jars remains a mystery. A somber and sobering experience, standing among the jars questions the limits of human endeavor.

Only through the recent discovery of human remains near the Plain of Jars has the site been dated and archaeologists have speculated that the jars were carved with iron tools and date them back to around 500 BC. Several diverse theories exist regarding the uses of the jars — one claiming that the jars once held human remains and another that they were used to collect rain water during monsoon season. Millions of unexploded objects from the Vietnam War remain in the vicinity making excavation a slow and dangerous process. Once the threat of unexploded objects is minimized, Laos intends to turn the Plain of Jars into a UNESCO World Heritage Site.

Be careful when enjoying this serene landscape however, the site can be extremely dangerous if you step off the beaten track. Be aware to stick to well-worn and marked paths when walking between the jar sites.