10 Top-Rated Places to Visit in Cambodia

Best known as both the home of the colossal temples of Angkor Wat and for the brutal Khmer Rouge era of the 1970s and later civil war, Cambodian history encompasses both some of humanity's greatest artistic accomplishments and most horrific deeds.

14/12/2017 15:50
Chia sẻ
The history is what draws most travelers here, but this Southeast Asian nation has more to offer for those who linger longer than a short temple hop to Siem Reap. The coastline of sandy white beaches tempts every sun sloth. Jungle-swathed countryside is geared up for the more intrepid, and the buzzing capital of Phnom Penh envelops visitors in the frenetic pulse of contemporary Cambodian city life. Beyond the temples, and recovering from the atrocities that rained down on the country in the late 20th century, Cambodia is an emerging destination for Southeast Asia travels that manages to charm all who come. This temple city is Cambodia's number one drawcard. Accessed from the town of Siem Reap, the temples of the Angkorian period are so ambitious in scale and in the majesty of their construction, that Angkor Wat is rated as one of the world's must-see ancient sites. Built between AD 802 and 1432, this was the largest city in the world during the medieval age and the vast powerhouse of the Khmer kings who endeavored to outbid their predecessors in the beauty of their construction. As the city's wooden dwellings were encroached and then decayed by the surrounding jungle, what remains today, are just those mighty temples.

The temple of Angkor Wat itself, the world's largest religious building, is only one sliver of the site in total, and the sprawling circuit of temples deserves three days to explore if you want to understand the scope of the Angkorian period's architectural achievements. For those short on time though, the main highlights after Angkor Wat are the tree-root clasped temple of Ta Prohm (which first found international fame as a location used in the movie Tomb Raider), the Bayon Temple for its 216 stone-carved faces, Angkor Thom, and Preah Khan. 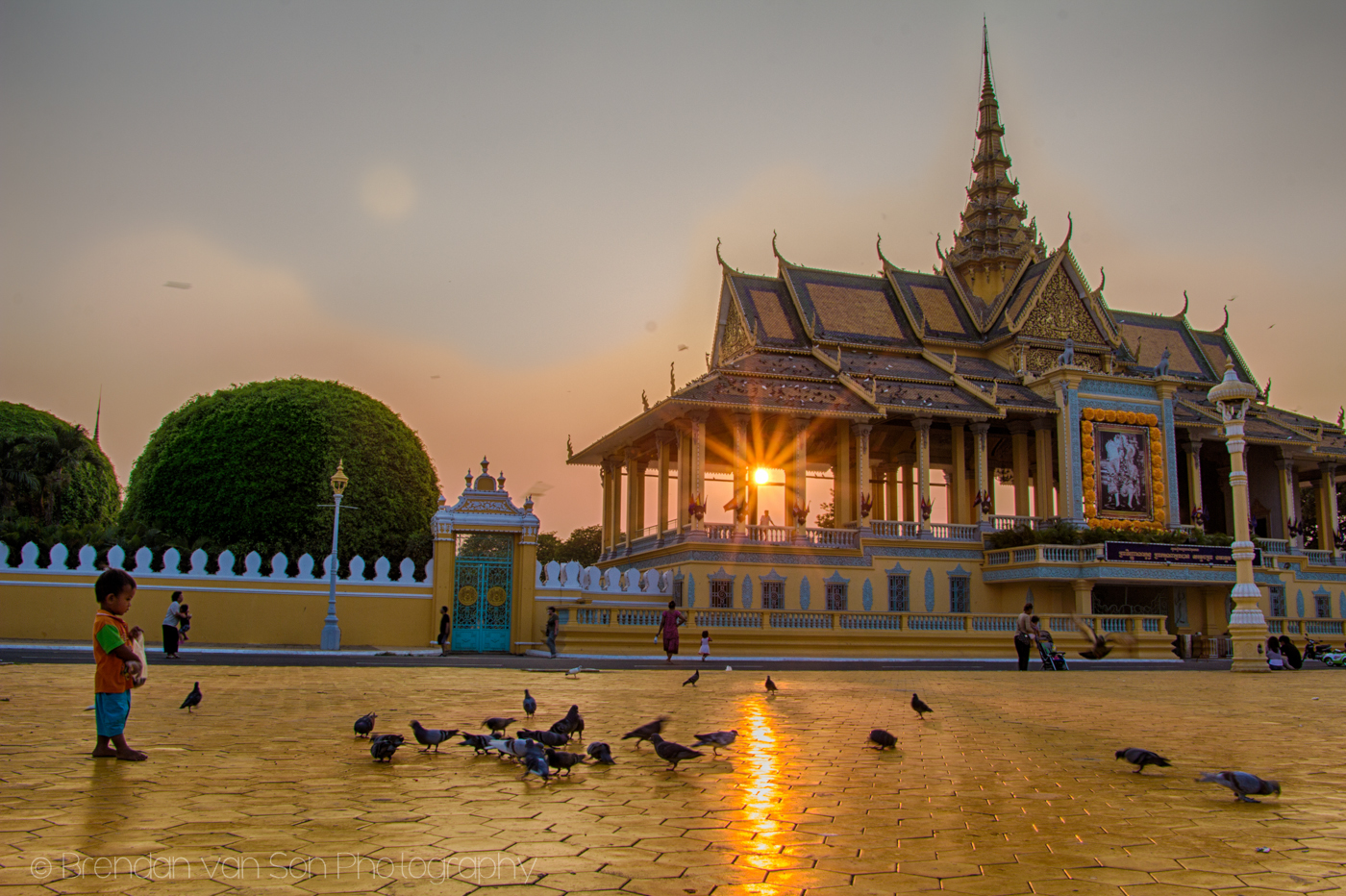 Cambodia's capital is the frenetic heartbeat of the nation; a city of chaotic streets abuzz with motorbikes and car horns that can frazzle at first glance. Deserted completely during the Khmer Rouge madness and left to wither and decay, Phnom Penh has bounced back to become one of Southeast Asia's most dynamic cities. For visitors, this is Cambodia's most cosmopolitan destination, with a café and restaurant scene unrivaled in the rest of the country. It's also home to a scattering of important historic sites that help unravel both Cambodia's modern and ancient history. The National Museum is home to a swag of Khmer sculpture that traces the nation's history from the pre-Angkorian age right through to the phenomenal majesty of the god-Kings of Angkor. The Royal Palace provides gorgeous examples of traditional artistry, while Tuol Sleng Museum and the killing fields of Choeung Ek speak of the horror and brutality the people of this country suffered under Khmer Rouge rule. 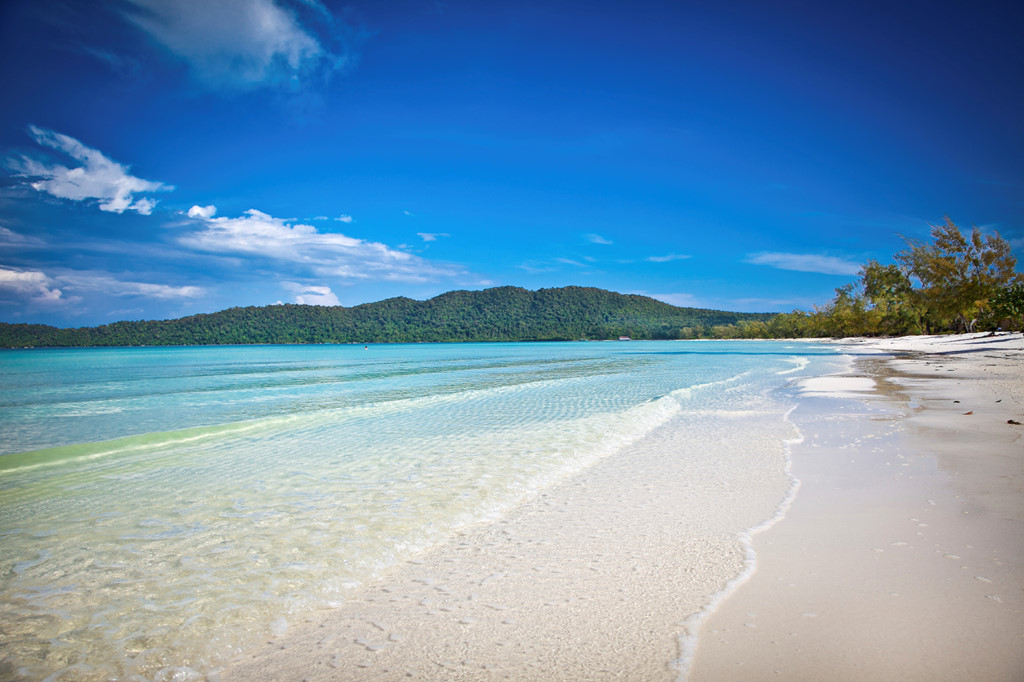 In Kompong Som Province, Sihanoukville is a tale of two halves, with a bustling but drab central district and its shoreline area home to a vibrant beach resort. The beaches here are Cambodia's top destination for sand and sun holidays and are popular with both local and foreign tourists. There's something for every kind of beach-goer here. Sokha Beach and Independence Beach boast the luxury hotels. Brash Ochheuteal Beach and the Serendipity Beach area are the most popular sandy strips and in recent years have emerged as one of Southeast Asia's backpacker party areas. For a much quieter scene, just to the south is Otres Beach with beach huts huddled directly on the sand, a sprinkling of classy boutique hotels, and a number of up-and-coming restaurants. 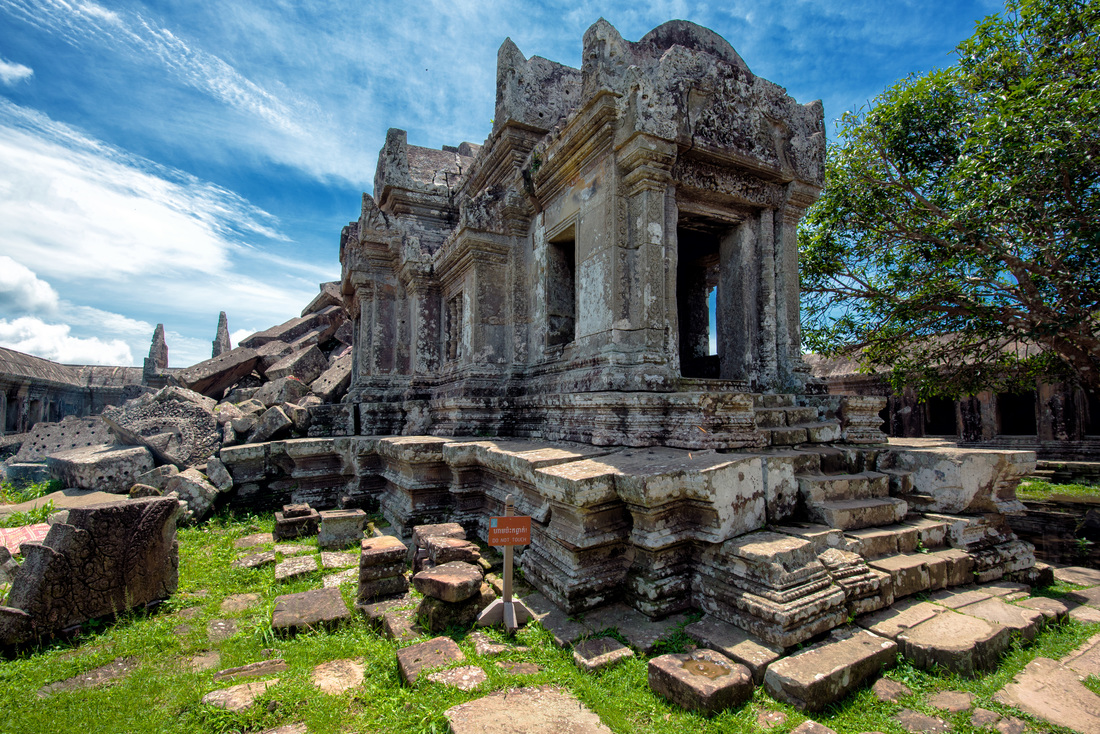 The temples of Angkor Wat may gain all the glory, but Prasat Preah Vihear wins the prize for the most dramatic location. Sitting atop the Dangrek Mountains, on an escarpment with dizzying views across the Cambodian floodplains, Prasat Preah Vihear is a monumental temple complex of intricately carved pavilions linked by long causeways, built originally to honor the god Shiva.

The temple is snug against the border with Thailand and has historically been a point of contention between the two nations, who both claim it as their own. The International Court of Justice ruled in Cambodia's favor in 2013, which led to border disputes flaring up between 2008 and 2011. Tensions have dissipated in the last few years, meaning this UNESCO World Heritage Site can now reclaim its rightful role on the tourist trail. Access is from Sra Em, although most visitors come on a day trip from Siem Reap (200 kilometers south). The countryside of rice fields and tiny villages surrounding the northwest city of Battambang holds some of the most tranquil rural scenery in Cambodia, and the area is home to swags of historic riches as well. All of this has made the city itself a popular destination on traveler itineraries. For history fans, the temples of Phnom Sampeau, Phnom Banan, and Wat Ek Phnom are all within day-tripping distance, while the famed Bamboo - a single-line rail track where "carriages" made from a platform of wood and bamboo travel between Battambang's east bank and the tiny village of O Srav - is one of the most popular activities for visitors. Battambang itself is a rather sleepy city compared to the buzz of the capital, with a central district brimming with colonial buildings. For those who found Phnom Penh's hectic buzz a bit too much to handle, Battambang is a thoroughly approachable town to use as a base. 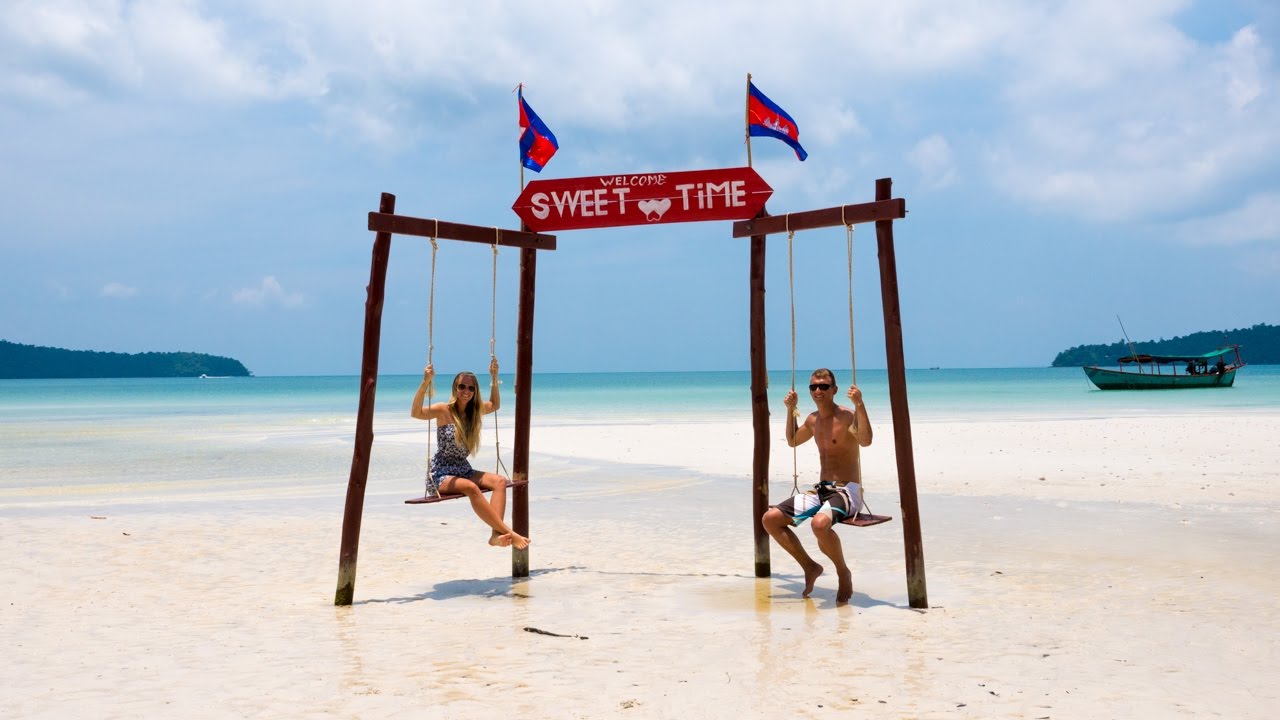 Just off Cambodia's south coast lie a scattering of islands just as beautiful as their Thai counterparts to the west, but much less visited. Compared to the now very developed islands of Koh Samui and Phuket, Cambodia's islands are a slice of laidback tropical bliss, where sun and sand take center stage, and the big resorts have yet to make their mark. Of all the islands, Koh Rong Samloem is one of the most beautiful with the long, sandy Saracen Bay home to a dozen beach hut resorts that offer a welcome respite from the world. It's really all about hammock-time here, but there's plenty of scuba diving activities on offer for the more active. You can access these islands from Sihanoukville. 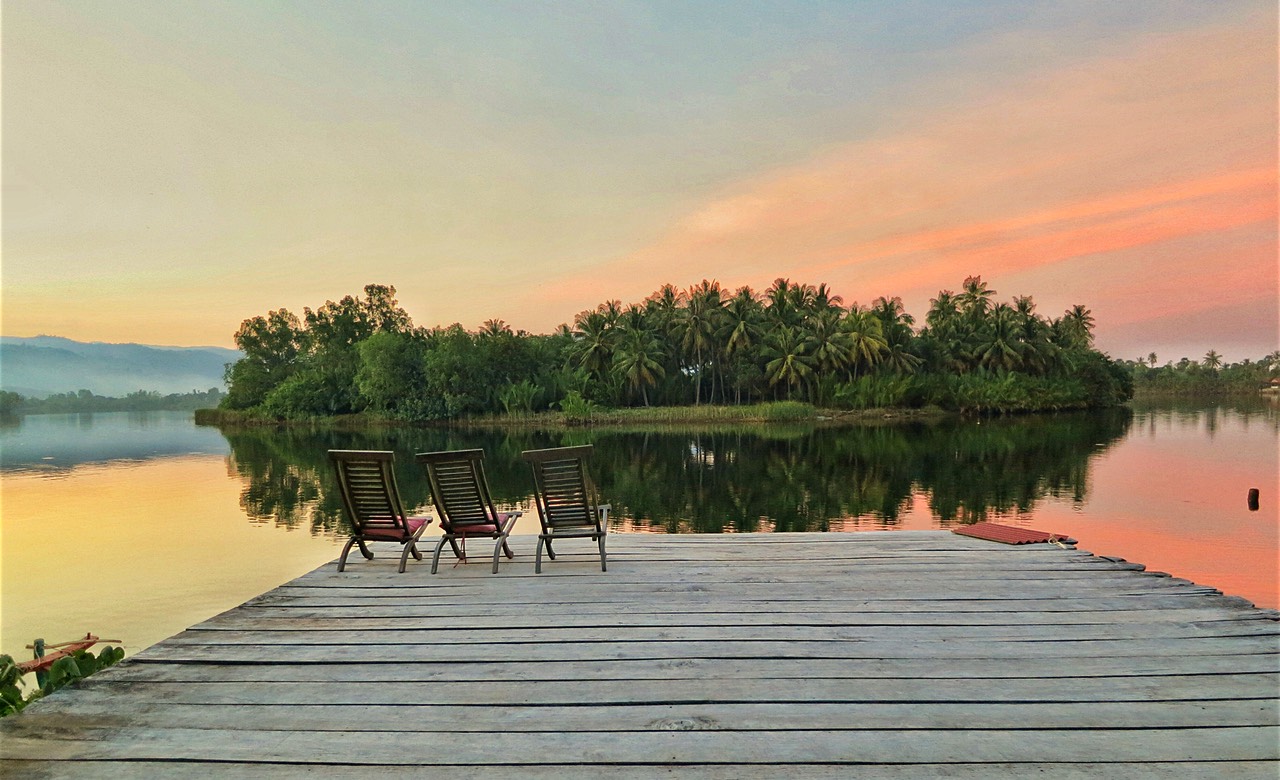 The laidback riverine town of Kampot has oodles of old world ambience. The compact central district is a joy to ramble around; full of surviving shop-house architecture, some of which has been painstakingly restored. Kampot's charm lies in its exceedingly chilled out atmosphere, and many a traveler finds themselves waylaid here longer than they expected, having succumbed to its easygoing pace. For the more active though, this is also an excellent base for discovering the surrounding sights of the south. The old French summer getaway of Bokor Hill Station, with its abandoned church and eerie, empty shell of a once-grand hotel, is an easy day trip from town, as are the limestone caves of Phnom Chhnork and Phnom Sorsia, both with old temples inside. 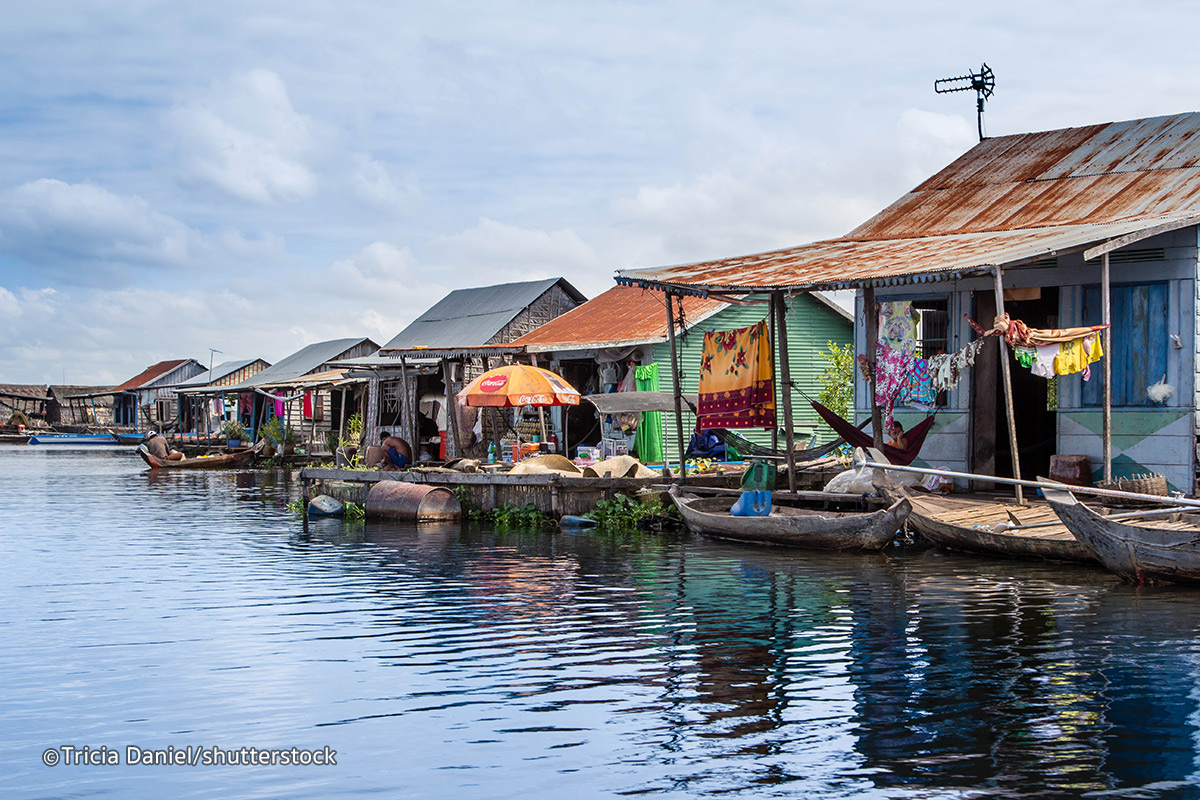 Tonlé Sap is Cambodia's most important waterway and Southeast Asia's largest freshwater lake. As well as being an important source of food and a vital tool for Cambodian irrigation, the lake itself is home to 170 floating villages that depend on fishing for their livelihood, with homes built directly on the water. The houses, shops, churches, schools, and temples of these villages are built on rustic buoy foundations of lashed together barrels and bamboo, and all transport is by boat. They're a fascinating place to spend a day exploring. One of the most interesting is the sprawling village of Kompong Luong, near the town of Pursat on Tonlé Sap's western shore, although the most popular village to visit is Chong Kneas near Siem Reap. 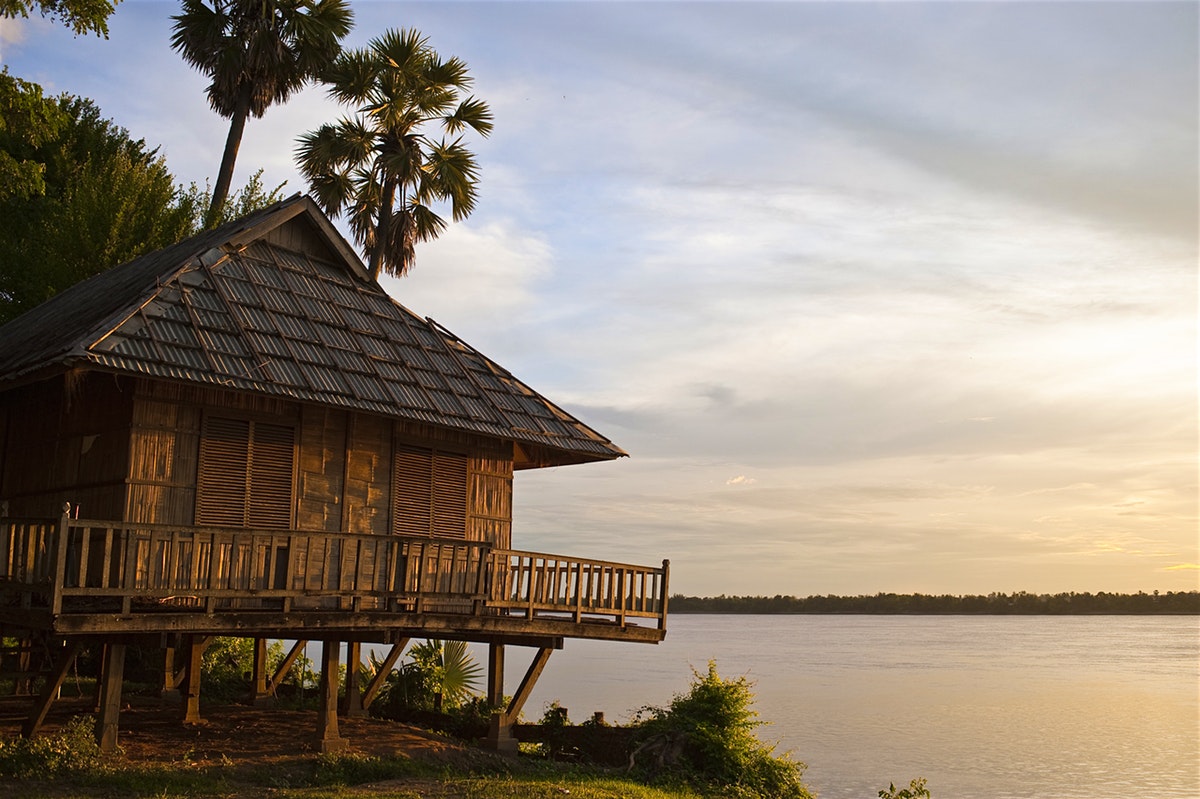 If you're here for the full Mekong experience, you've come to the right place. Spread along the banks of the mighty Mekong, Kratie has become a major destination for travelers due to its dolphin-watching tours. The endangered Irrawaddy dolphins are endemic to the Mekong, and environmental measures have now been put in place to try and help their dwindling numbers. Tourism has played a good role in trying to protect the dolphins by offering an alternative economy to fishing. To see the dolphins head to Kampi, just north of Kratie, where there are plenty of boat tours available. This pre-Angkorian temple site dates from the early 7th century when it was the capital of the Upper Chenla Empire. More than 100 brick temples dedicated to various Hindu gods sit within the forest here, many half-swallowed by mammoth tree roots. Archaeologically, the site is extremely important, containing some of Cambodia's oldest surviving buildings, but you don't have to be an archaeology buff to appreciate the ethereal beauty of this tree-wrapped site. The most important temples in the area are found in Prasat Sambor, Prasat Tao, and Prasat Yeay Peau, which all have remarkably clear carvings on their temple walls and plenty of ethereal ambience provided by twisting tree trunks and coiling vines. You can access Sambor Prei Kuk from Kompong Thom.