Banh Mi - a product of Vietnam’s colonial past, the beloved concoction combines a crunchy French baguette with pork, pate and an ever- changing array of fresh vegetables.

27/09/2018 15:01
Chia sẻ
The cab driver stopped on the bustling boulevard Pho Hue and pointed at a mishmash of incongruent four and five-story buildings across the street. I hopped out and dodged buzzing motorbikes and exhaust-belching cars, trying to get from curb to curb. 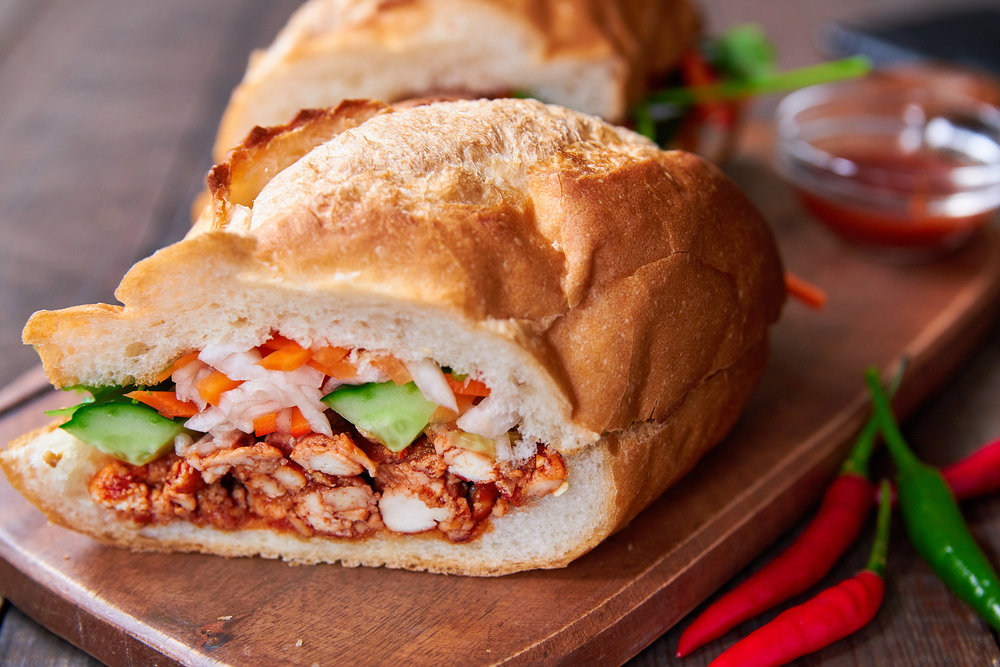 Then I spotted it: Banh Mi Pho Hue (118 Phố Huế; 84-4-3822-5009), the no-frills sandwich shop named for the Hanoi street on which it sits. Nearly everyone I’d asked had said Banh Mi Pho Hue served the tastiest banh mi in Hanoi. But the family that’s run the shop since 1974 has a reputation for closing it whenever the cooks run out of ingredients. So when I arrived at 7pm on a Saturday and found it still open, I was delighted.

In an age of hipster food mashups – Korean tacos, anyone? – the banh mi is the product of a true cultural and culinary blend. No food trucks, Instagram photos or tweets led to its creation. The sandwich began with colonialism – specifically, the establishment of French Indochina in 1887 – when the occupying French simply slathered butter and pate inside a baguette. Then when the Vietnamese sent the French packing in 1954, they put their own spin on the sandwich, adding slices of pork, herbs and pickled vegetables, and creating the banh mi as we know it.

The rest of the world didn’t learn about this spectacular sandwich until after the end of the Vietnam War in 1975. As many southern Vietnamese emigrated to the United States, Europe and Australia, they brought recipes, including one for their iconic sandwich. As a result, if you’re eating a banh mi outside of Vietnam, you’re probably enjoying a southern-style snack: the baguettes are generally bigger and they’re crammed with more veggies and herbs, such as cilantro, carrots and hot peppers.

Oddly, the banh mi has always been the one kind of food I liked better outside its home turf. When I tried a banh mi in Ho Chi Minh City a few years earlier, I’d found the bread stale and the ingredients skimpy; inside was a paltry mix of a few slices of ham, a smear of pate and flaccid cilantro and carrots. I gave up after one sandwich. I’d had far better banh mi in New York City; even Minneapolis! Was I crazy? Could the banh mi outside of Vietnam actually be better?  Now back in Vietnam, I was determined to find out the truth. Would my faith in the banh mi in its homeland be restored? Is the banh mi the best sandwich in the world? 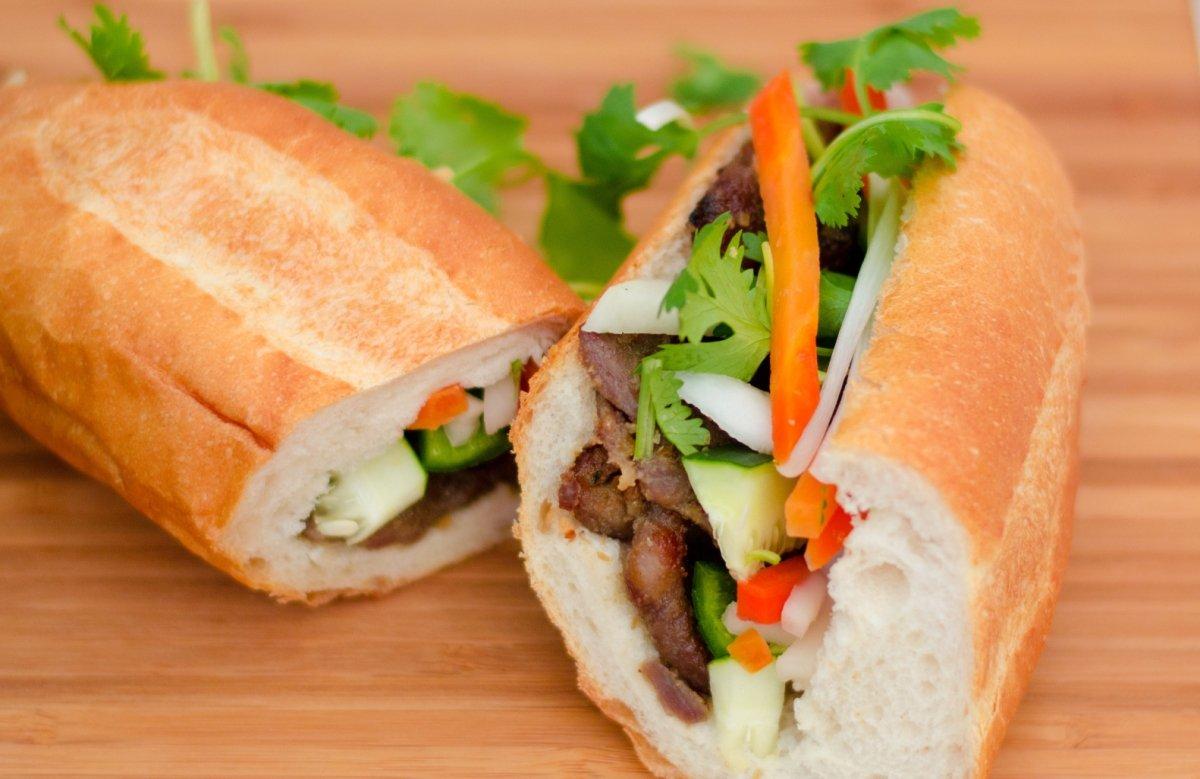 At Banh Mi Pho Hue, Geoffrey Deetz – a chef and Vietnamese food expert who’s been living in the country for nearly 15 years – was peppering the sandwich maker with questions about ingredients. Meanwhile, I’d just been served my banh mi, partially covered with piece of white paper affixed with a rubber band.

I pulled back a side of the baguette to get a look at the ingredients: pork deli meat, fatty char siu pork, pork floss, creamy pate, Chinese 5 spice and, curiously, butter.  The sandwich maker finished it off by pouring pork-chili gravy inside. Interestingly, I saw none of the herbs and veggies that spill out of the baguettes served in southern Vietnam or outside of the country.

Happily, I didn’t throw up. This banh mi was radically different, true. But it was just as good as the sandwiches I’d eaten elsewhere. The crunch of bread was followed by an interplay of porky goodness with a slight kick of spice.  It was more like a meat sandwich. I loved it.

“They don’t really like overly complex food in Hanoi,” Deetz added. “But so many things in here have a function: the pork floss soaks up the sauce, the pate adds moisture and the fact that the baguette is lightly toasted keeps it from getting soggy in this immense humidity.”

While in Vietnam, I also tried a banh mi in Hoi An, a Unesco World Heritage-designated city on the central coast. In a region known for fertile soil and vibrant herbs, it’s no surprise the sandwiches there are stuffed with verdant vegetables. 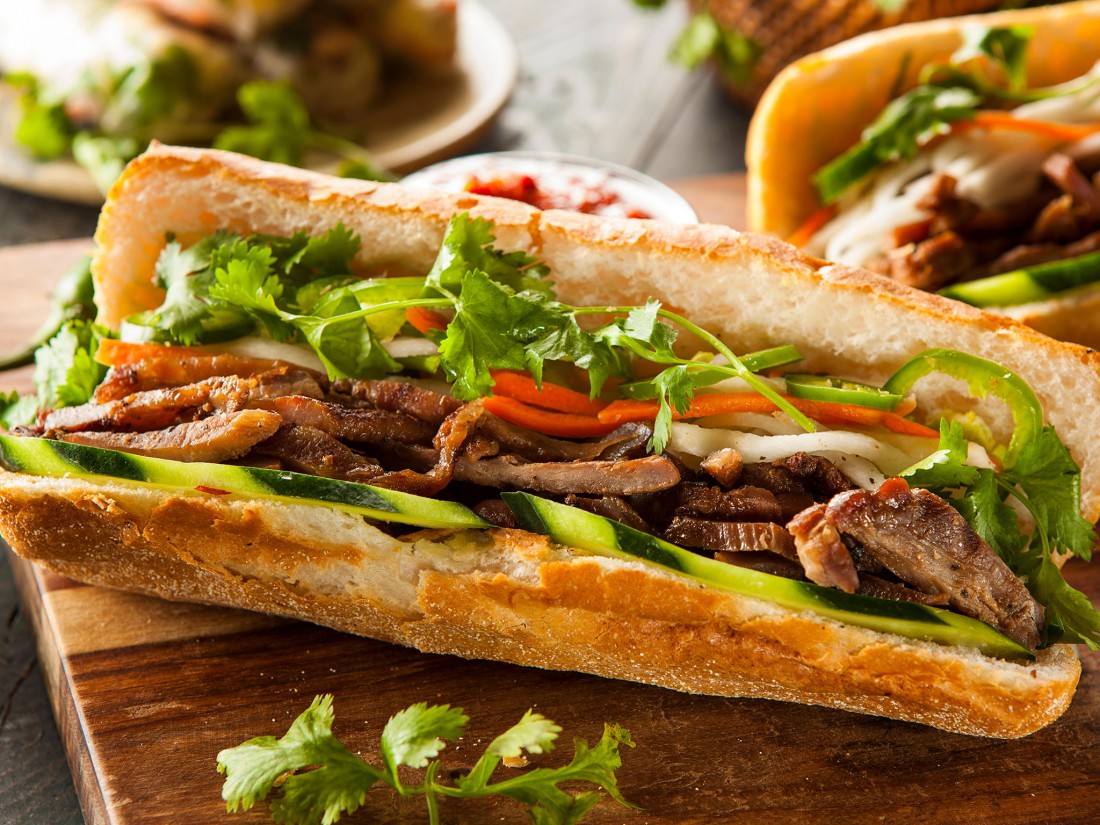 As I did in Hanoi, I asked everyone who would listen where I could find the best banh mi around. The answer was Banh Mi Phuong (‪Phan Chau Trinh 2B) a diminutive shop in the centre of town. I ordered the classic, which the menu board indicated contained “bread, pork, ham, pate”. But there was so much more: long slices of cucumber, fresh cilantro, pickled carrot and even juicy tomato slices. Phoung finished it off with a flurry of sauces: a squirt of chili sauce and two different pork sauces, one from boiled pork and one from smoked pork.

The key to a good banh mi is, in fact, the bread. A bad baguette – a hard, crumbly log – will ruin an otherwise fine sandwich. Phuong’s bread, baked right next door, was ultra-soft, almost deflating when I took a bite, while also maintaining a crispy exterior. Top that (literally) with high-quality pork, two different pork-based sauces and a few surprises like tomato and pickled papaya and I had a very good sandwich in my hands.

All told, I sampled about 15 banh mi sandwiches over two weeks in Vietnam. Happily, I’d eaten some of the best sandwiches I’d ever had. That banh mi I tried in Saigon a few years ago – the one that turned me off to the sandwich for a while – was just a fluke.

But is the banh mi the best sandwich in the world?

There’s scene in The Simpsons in which Homer expresses bewilderment when his daughter, Lisa, becomes a vegetarian.

“What about bacon?” Homer asks.

“No!” Lisa says. “Dad, those all come from the same animal!”

Something that combines so much pork with fresh herbs all stuffed into a crispy baguette is, I have to say, a pretty magical sandwich.