Germany has a very specific cuisine, and one that may seem an acquired taste. But for all their love of meat, potatoes and sauces, their dishes are certainly hearty and delicious. While you may not be surprised to find lots of sausage on this list, there may be a few surprises. 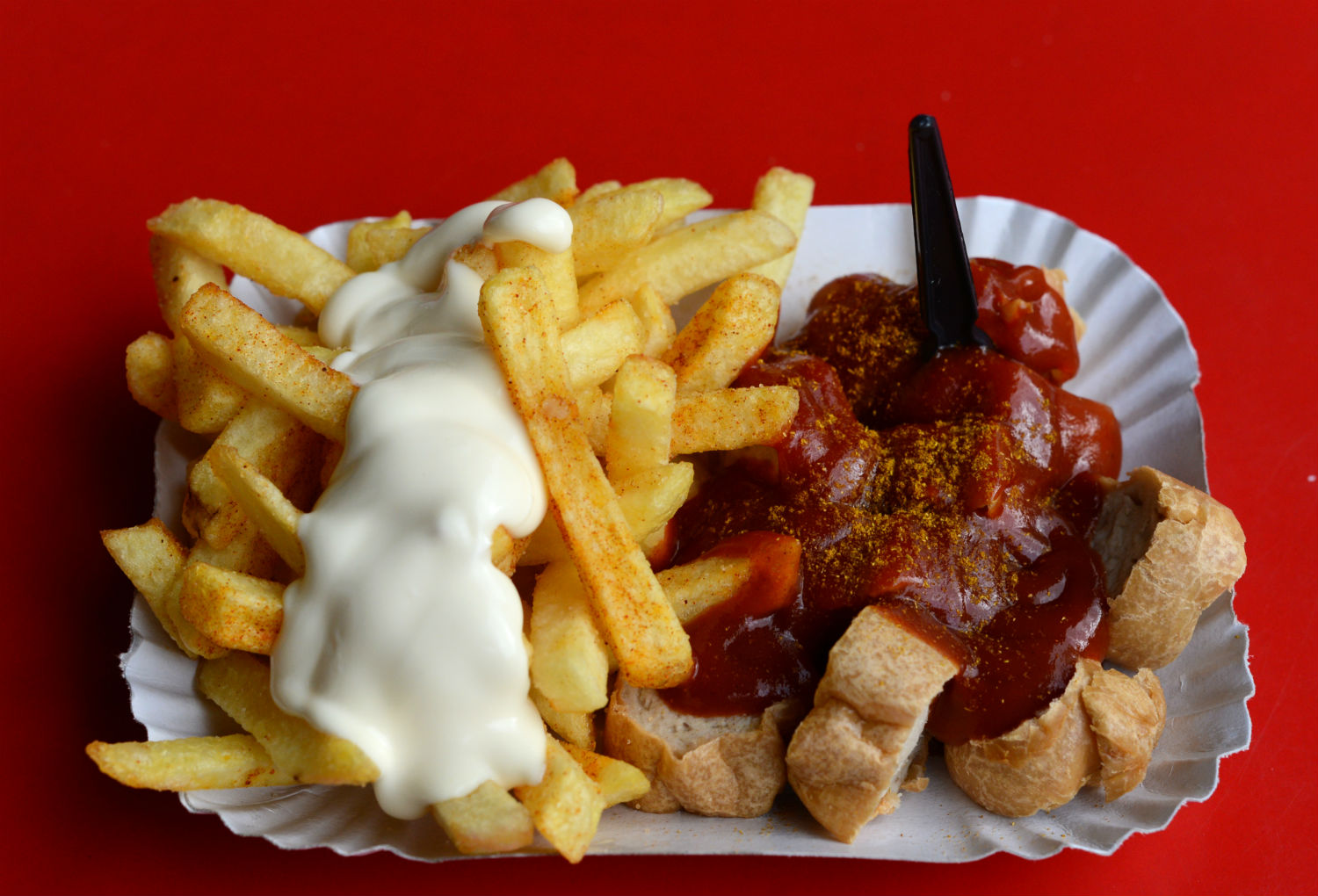 Currywurst is a matter of national pride for Berliners. There’s even a museum in its honour. On every street, you can be sure to find a place where this cheap, humble grilled sausage is served. The secret is in the sauce; a combination of the three key ingredients ketchup, Worcestershire sauce and curry powder. The combo dates back to 1949 when Herta Heuwer poured the ingredients she got from some British soldiers over grilled sausage.

Welcome vegetarians. This Swabian speciality originally from the area around Stuttgart is Germany’s take on pasta. The dough consists of eggs, flour, salt and a hint of fizzy water. It’s generally served topped with mountains of quality cheese adding flavour and texture.

These meatballs take their name from the Prussian city of their origin, and are a hearty and tender favourite for Berliners. The dish can be prepared using various ingredients, including ground veal, beef, pork, onions, eggs, anchovies and flour, before being cooked in a broth. Once again, it’s the sauce that have given them glory status, a creamy mixture with capers and lemon. This is probably Germany’s most international dish, and with a delicious tender and crispy taste, it’s not difficult to imagine why. The most famous version of Schnitzel has to be Wiener Schnitzel, which is a thinly sliced piece of veal-meat, covered with flour, egg and bread crumbs and then deep fried in oil or a lot of butter until it turns golden on the outside. These days it can also be made pork, chicken breast and even soya meat, though always served with potatoes. This sausage is the reigning king of the German barbecue, especially the short and thin ones which hail from Nürnberg. Grill your Bratwurst for a few minutes on each side, stick it in a bun, add some ketchup and mustard and volia! (Although no German around the barbeque would ever dare use the French expression). Still, the iconic Bratwurstsemmel is now ready to be devoured. 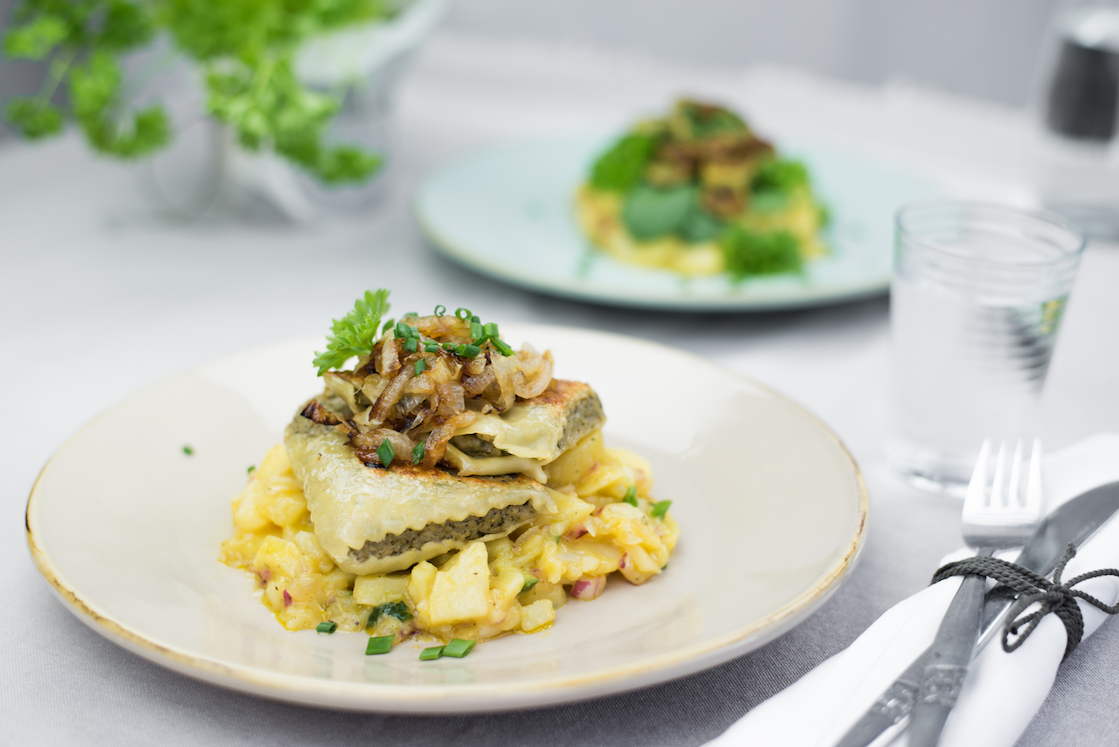 Who would have thought that the Germans were so into their pasta? Maultaschen is another kind of pasta filled with all kinds of stuffing from pork to beef to vegetables. These pasta pockets are either boiled or fried. 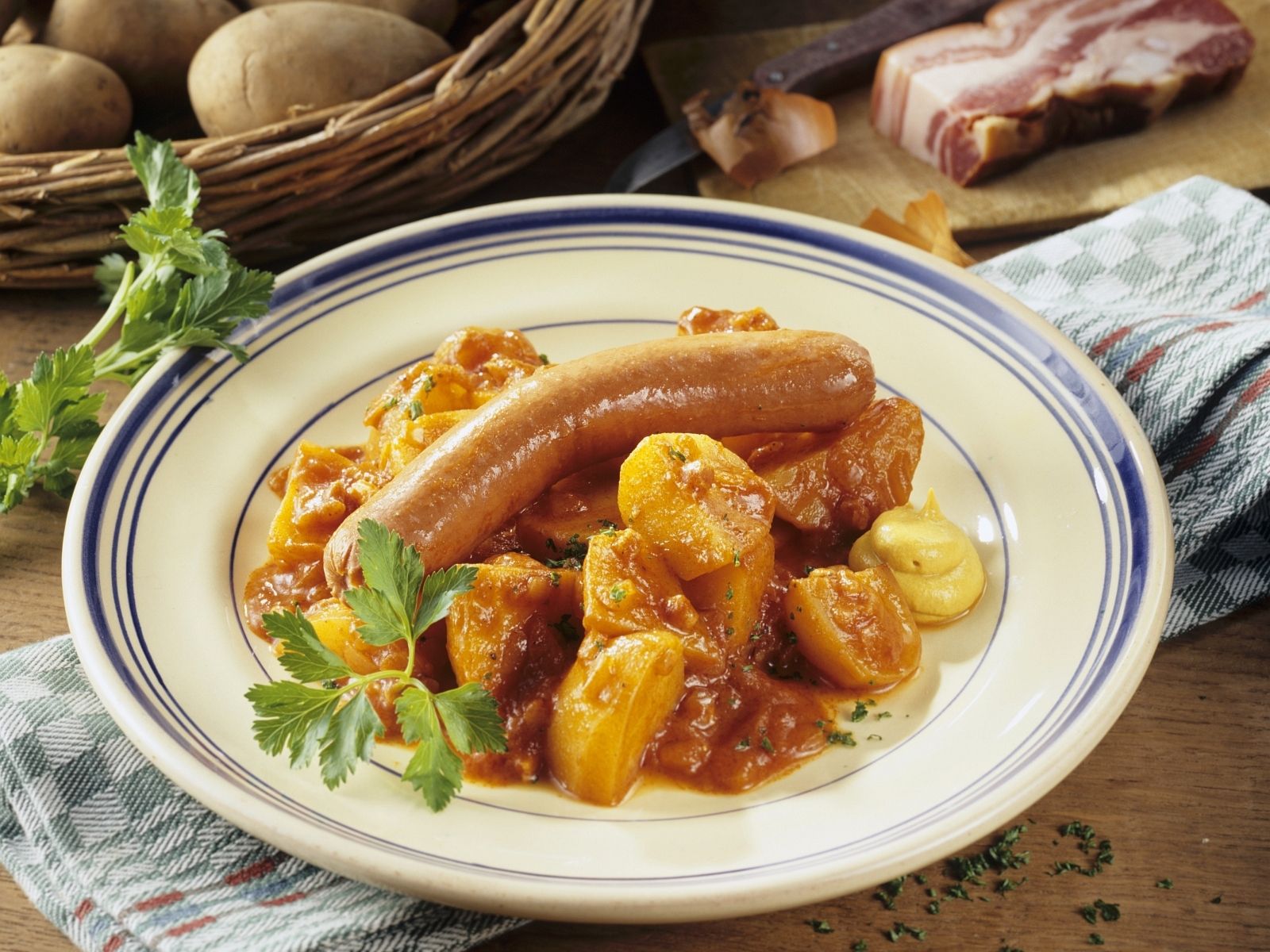 Invented in 1889 by a local restaurant owner who added pork to the classic veal bratwurst mix, today’s bockwurst is really just a mish mash of different meats stuffed into a sausage form. We hear there’s even a fish-only version. 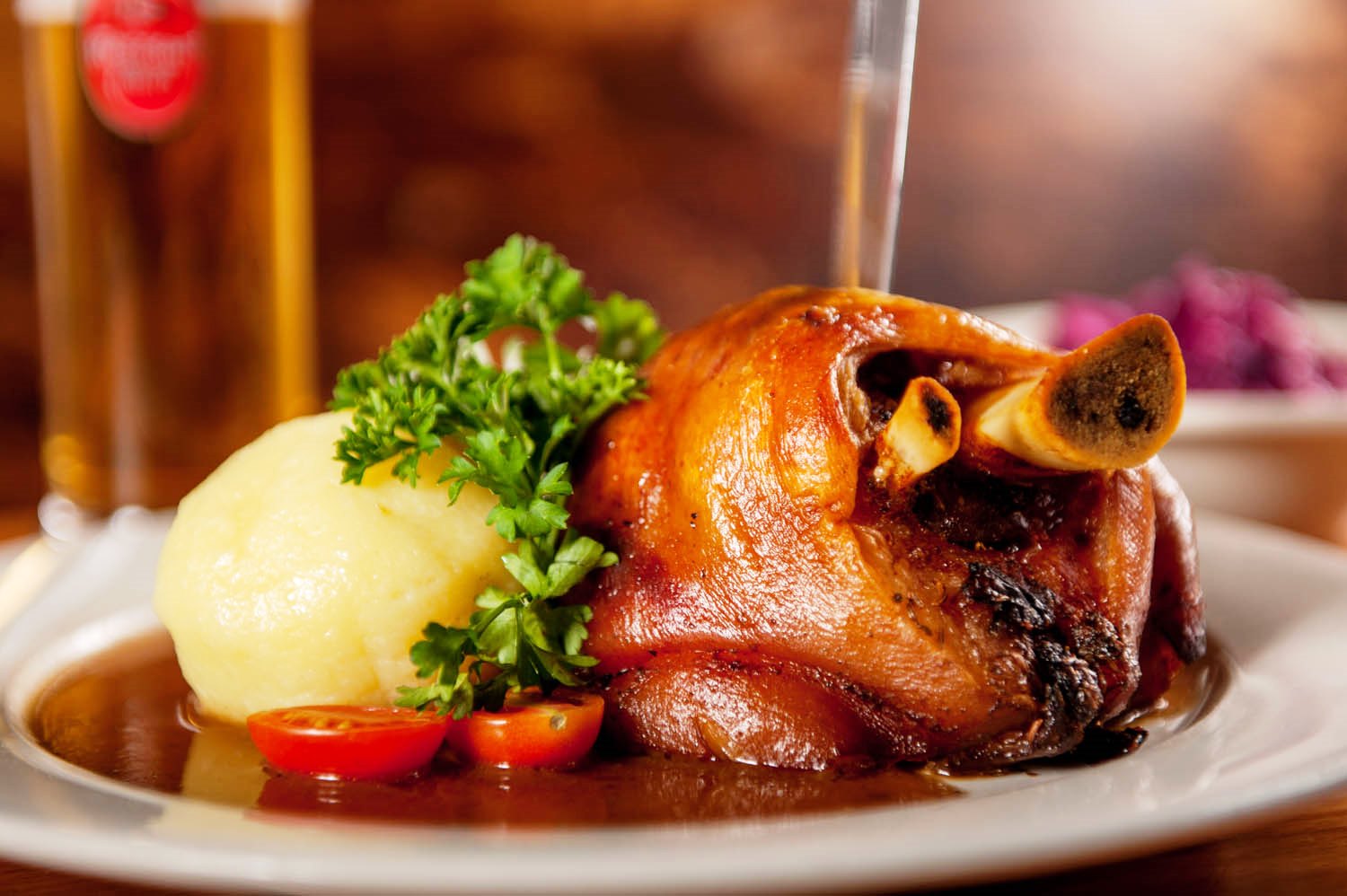 Eisbein, or pork knuckles are a beloved classic unique to the city of Berlin. The meat is usually boiled or grilled, and comes served with sauerkraut, peas and potatoes. Seeing one of these enormous knuckles on a plate is reminiscent of medieval banquets. 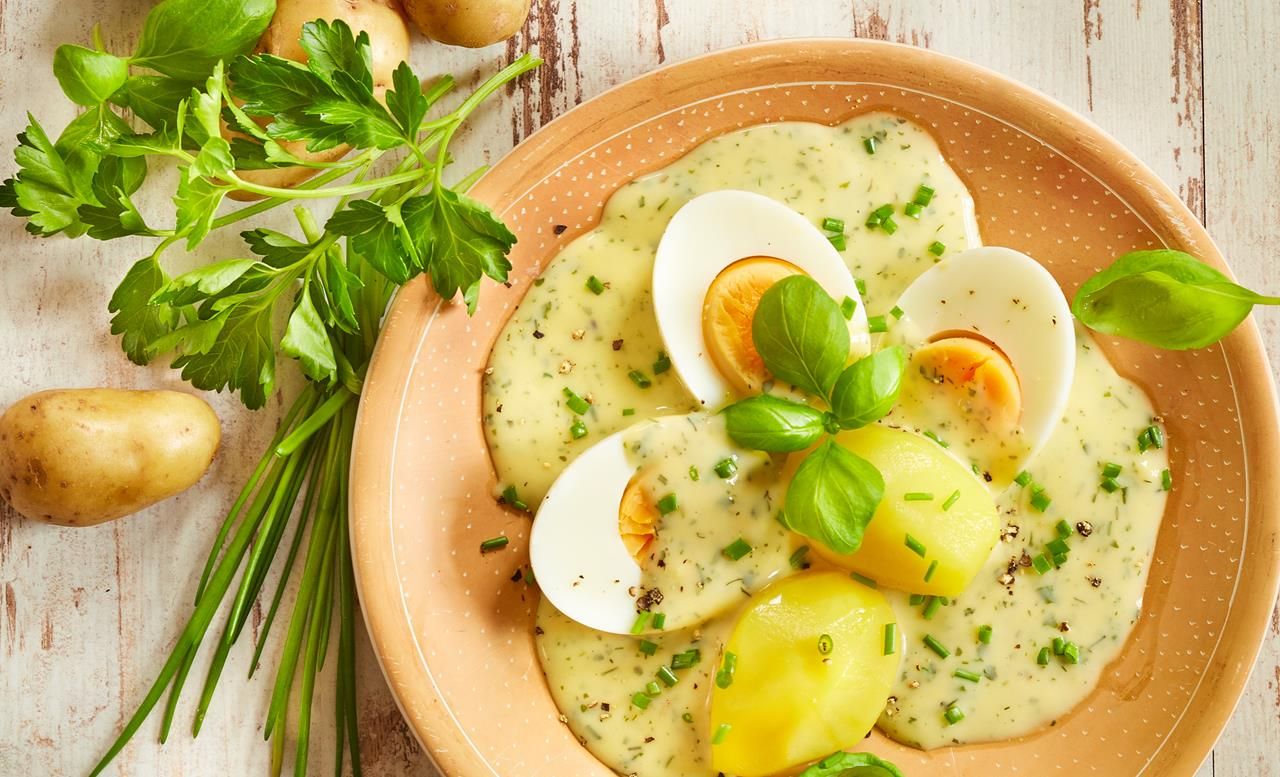 This is the dish your grandmother would have served you. It is the equivalent of peanut butter and jelly sandwiches for young Berliners. It’s simple and to the point and you must enjoy mustard to enjoy this dish. Senfeier are literally ‘mustard eggs’ – hard-boiled and served with mashed spuds, all covered in a creamy mustard sauce.

Okay so technically this dish is of Turkish origin but while you might not find them all over Germany, you can’t go a block without finding a kebab shop in Berlin. It’s pretty much a traditional dish in the city, and not just with Berlin’s massive Turkish population. Meat and salad stuffed inside a wrap, perfect for any time of the day, especially when you’re short on time.