There’s a religious site in Hue that lures tourists by its beautiful and ancient architectural structures of worship, Thien Mu pagoda in the ancient Hue city.

03/01/2018 14:11
Chia sẻ
Where is it in Hue city? Thien Mu Pagoda (namely Heaven Fairy Lady Pagoda), also known as Linh Mu Pagoda, is one of the most fascinating and ancient pagoda in Hue city. It is situated on Ha Khe hill, on the north bank of the Perfume River, in Huong Long village, 5 kilometers from Hue city, which is easy to reach from the city center. 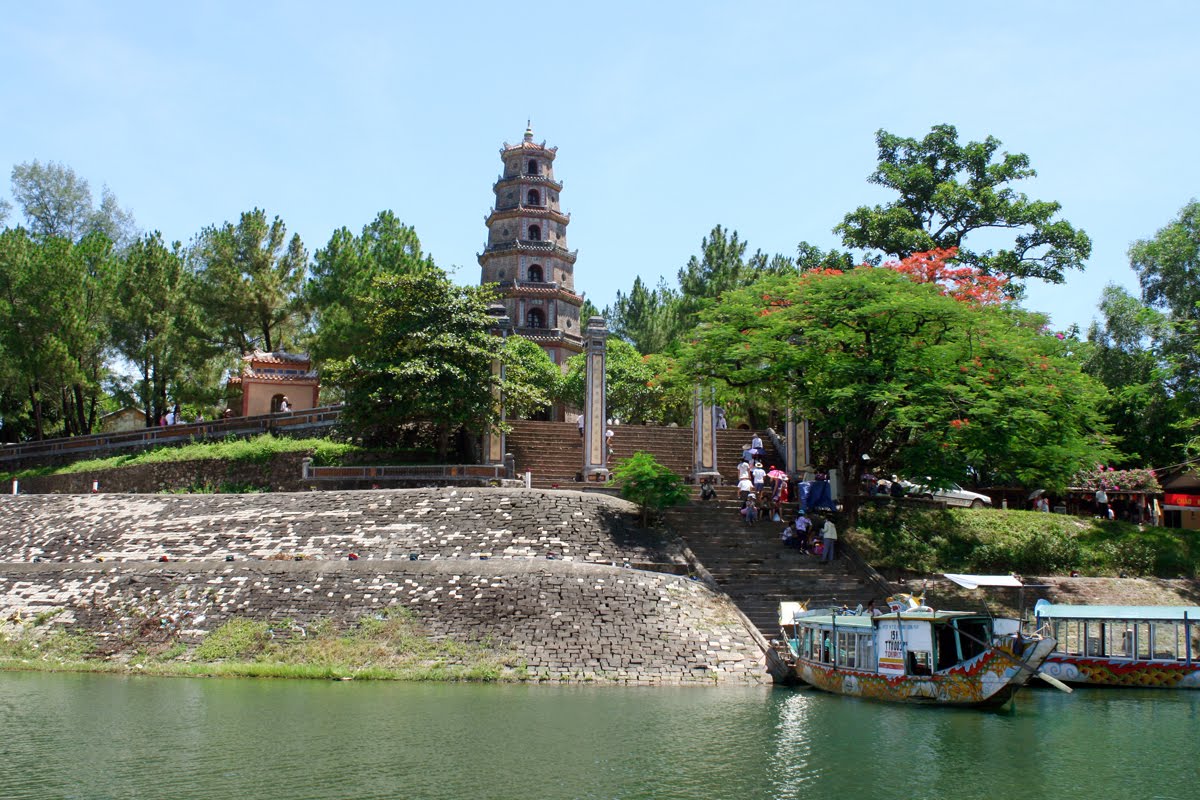 Legendary story. The name of the pagoda derives from a special legend. Long time ago, an old woman appeared on the hill where the pagoda stands today, telling local people that a Lord would come and build a Buddhist pagoda for the country's prosperity. Lord Nguyen Hoang therefore ordered the construction of the pagoda the "Heaven Fairy Lady" or Thiên Mụ in Vietnamese (also called Linh Mụ). Thanks to such a mysterious history, the pagoda has attracted a great number of tourists from both inside and outside of the nation to come and explore the legend themselves.

Formation and growth. The beautiful pagoda was built in 1601. Later on, several kings of the Nguyen Dynasty such as Gia Long, Minh Mang, Thieu Tri and Thanh Thai, all had the pagoda restored. At this very initial time, Hoang was the governor of the province of Thuan Hoa (now known as Hue), yet, started ruling his independent state in central Vietnam. According to the royal annals, Hoang was on a sightseeing trip and holiday to contemplate the seas and mountains of the local area when he passed by the hill, which is now the site of the Thien Mu Pagoda. On hearing the mentioned local legend, he had the pagoda constructed. The initial temple was in a very simple form of construction, but as time went by, it has been redeveloped and expanded with more intricate features. 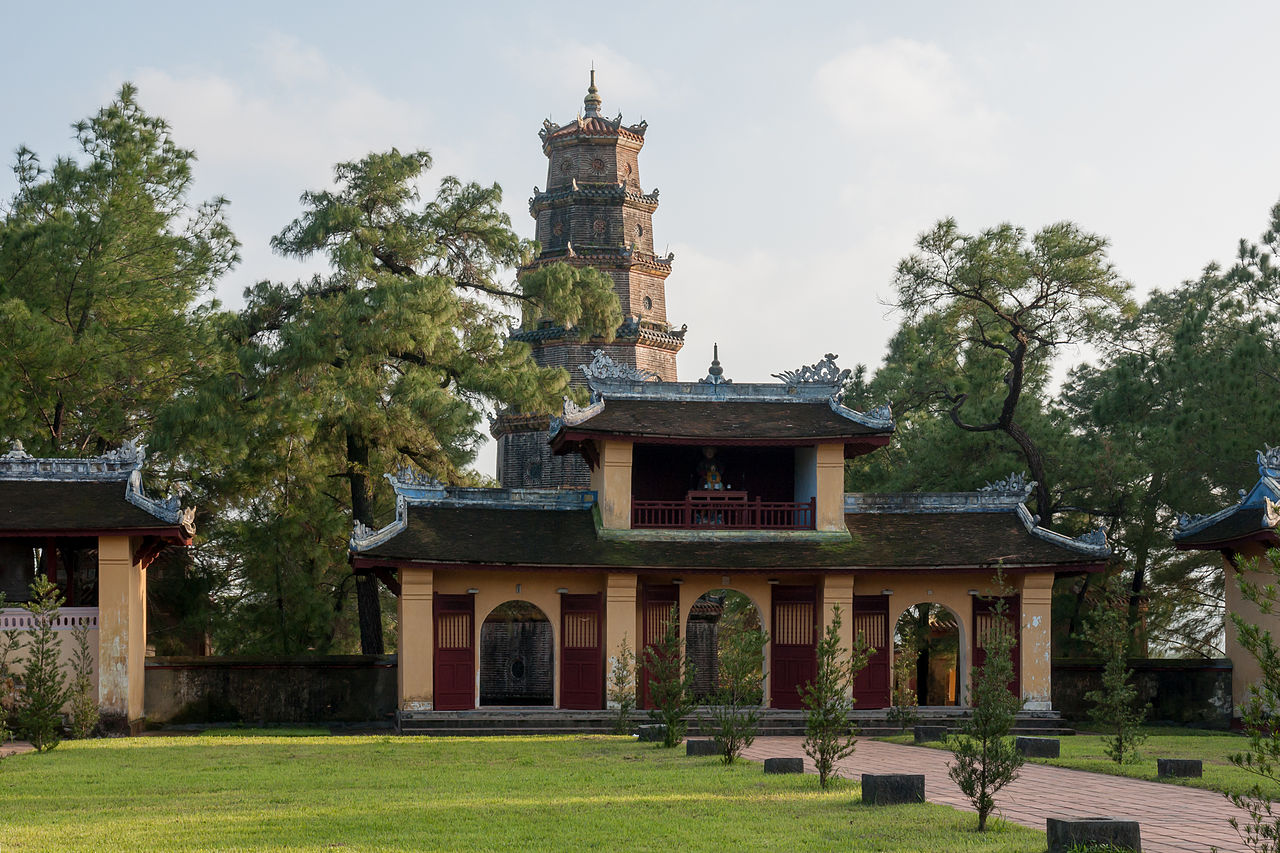 A special architectured site. The most striking feature of the pagoda, Phuoc Duyen tower (initially called Tu Nhan tower), was erected in 1884 by King Thieu Tri, and has become the unofficial symbol of Hue. This octagonal tower has seven storeys (2m high), which is dedicated to a Buddha who appeared in human form. It is the highest stupa in Vietnam, and is often the subject of folk rhymes and cadao about Hue, such is its iconic status and association with the city. More importantly, it is regarded as the unofficial symbol of the former imperial capital.

To the left of the tower is a pavilion sheltering an enormous bell. The bell, called Dai Hong Chung, was cast in 1710 by Lord Nguyen Phuc Chu. It is famous for the great size, which is 2.5m high and 3,285 kg weigh. It is considered to be an outstanding achievement of 18th century bronze casting.

To the right of the tower is a pavillion containing a stela dated from 1715. It is set on the back of a massive marble turtle, a symbol of longevity, and is 2.58 m high. 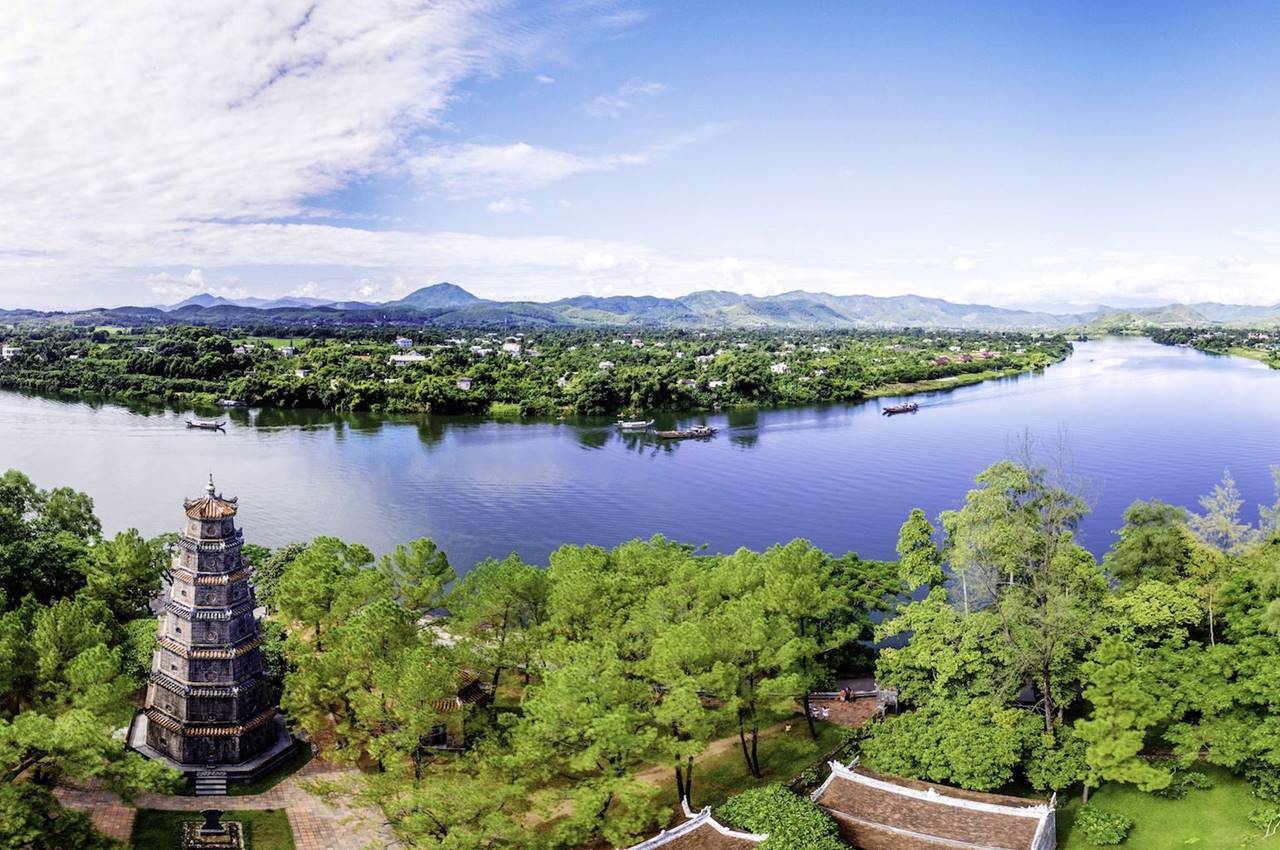 Besides, there are several popular works of art inside the pagoda, which are of great captivation to tourists. For instance, Dai Hung shrine, the main-hall, which presents a magnificent architecture. As bronze cast statues, it shelters some precious antiques: the bronze gong cast in 1677, the wooden gilded board with Lord Nguyen Phuc Chu's inscriptions (1714).

A historical role. Besides the architectural value, Thien Mu pagoda features a great historical role, which is also of absorption to visitors. During the summer of 1963, Thien Mu Pagoda, like many in South Vietnam, became a hotbed of anti-government protest. South Vietnam's Buddhist majority had long been discontented with the rule of President Ngo Dinh Diem since his rise to power in 1955. Diem had shown strong favouritism towards Catholics and discrimination against Buddhists in the army, public service and distribution of government aid. Discontent with Diem exploded into mass protest in Hue during the summer of 1963 when nine Buddhists died at the hand of Diem's army and police on Vesak, the birthday of Gautama Buddha. Accordingly, Buddhist protests were held across the country and steadily grew in size. In those historical days, Thien Mu Pagoda was a major organising point for the Buddhist movement and was often the location of hunger strikes, barricades and protests.

Today, the pagoda is surrounded by flowers and ornamental plants. At the far end of the garden stretches a calm and romantic pine-tree forest. It is much well-maintained and very welcoming to all visitors.