The Park is considered a paradise for researchers and explorers of grottoes and caves and is the home to 140 families, 427 branches, and 751 species of precious plants.

17/07/2017 16:38
Chia sẻ
Phong Nha - Ke Bang is a national park in the center of Quang Binh province in north-central Vietnam. It protects one of the world's two largest karst regions with several hundred caves and grottoes. Its name derives from Phong Nha cave, the most beautiful one, with numerous fascinating rock formations, and Ke Bang forest. The plateau is probably one of the finest and most distinctive examples of a complex karst landform in Southeast Asia. 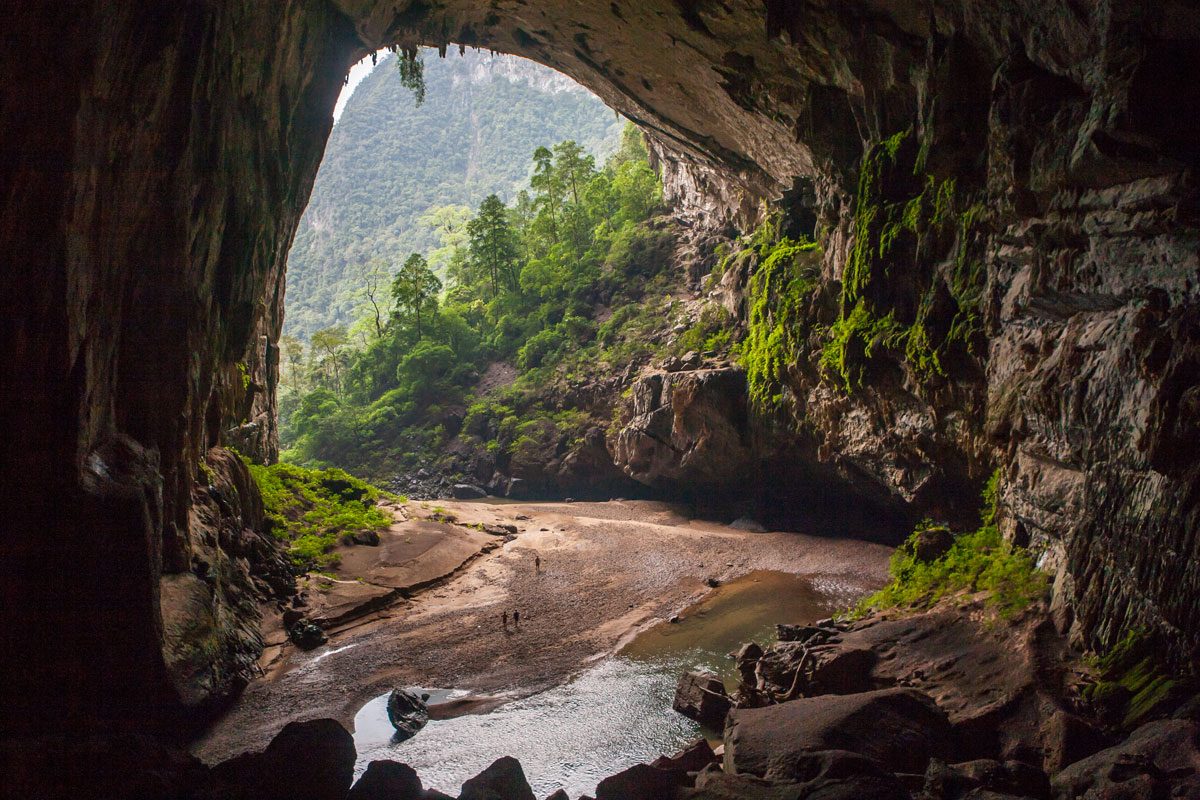 Geographically, the Phong Nha-Ke Bang National Park (PNKBNP) is located in central Vietnam, about 500km south of the capital, Hanoi, within the Quang Binh Province.


Recognition by UNESCO in 2003


Phong Nha-Ke Bang National Park was first nominated as a UNESCO World Heritage Site in 1998. The dossier submited to UNESCO was for the recognition of Phong Nha nature reserve as a world natural heritage under the name “Phong Nha Nature Reserve”. The reason given for the nomination was that this nature reserve satisfied the criteria of biodiversity, unique beauty and geodiversity (criteria I and iv).

It was recognized as a world natural heritage site at the UNESCO's 27th general assembly session being held in Paris in June 30th – July 5th, 2003. At the session, delegates from over 160 member countries of UNESCO World Heritage Convention agreed to include Phong Nha-Ke Bang park and 30 others worldwide in the list of world heritage sites. Phong Nha-Ke Bang National Park meets with criteria viiii in accordance with UNESCO’s appraisal scale since it displays an impressive amount of evidence of earth’s history and is a site of importance for increasing human understanding of the geologic, geomorphic and geo-chronological history of the region.


Criterion (viii): Phong Nha is part of a larger dissected plateau, which also encompasses the Ke Bang and Hin Namno karsts. The limestone incontinuously demonstrates the complexity interbedding with shales and sandstones. This, together with the capping of schists and apparent granites has led to a particularly distinctive topography.

Looking into the caves, you may recognize discrete episodic sequences of events, leaving behind various levels of fossil passages, formerly buried and now uncovered palaeokarst (karst from previous, perhaps very ancient, periods of solution); evidence of major changes in the routes of underground rivers; changes in the solutional regime; deposition and later re-solution of giant speleothems and unusual features such as sub-aerial stromatolites. The location and form of the caves suggest that they might owe much of their size and morphology to some as yet undetermined implications of the schists and granites which overlay the limestone. On the surface, there is a striking series of landscapes, ranging from deeply dissected ranges and plateaux to an immense polje. There is evidence of at least one period of hydrothermal activity in the evolution of this ancient mature karst system. The plateau is probably one of the finest and most distinctive examples of a complex karst landform in SE Asia. 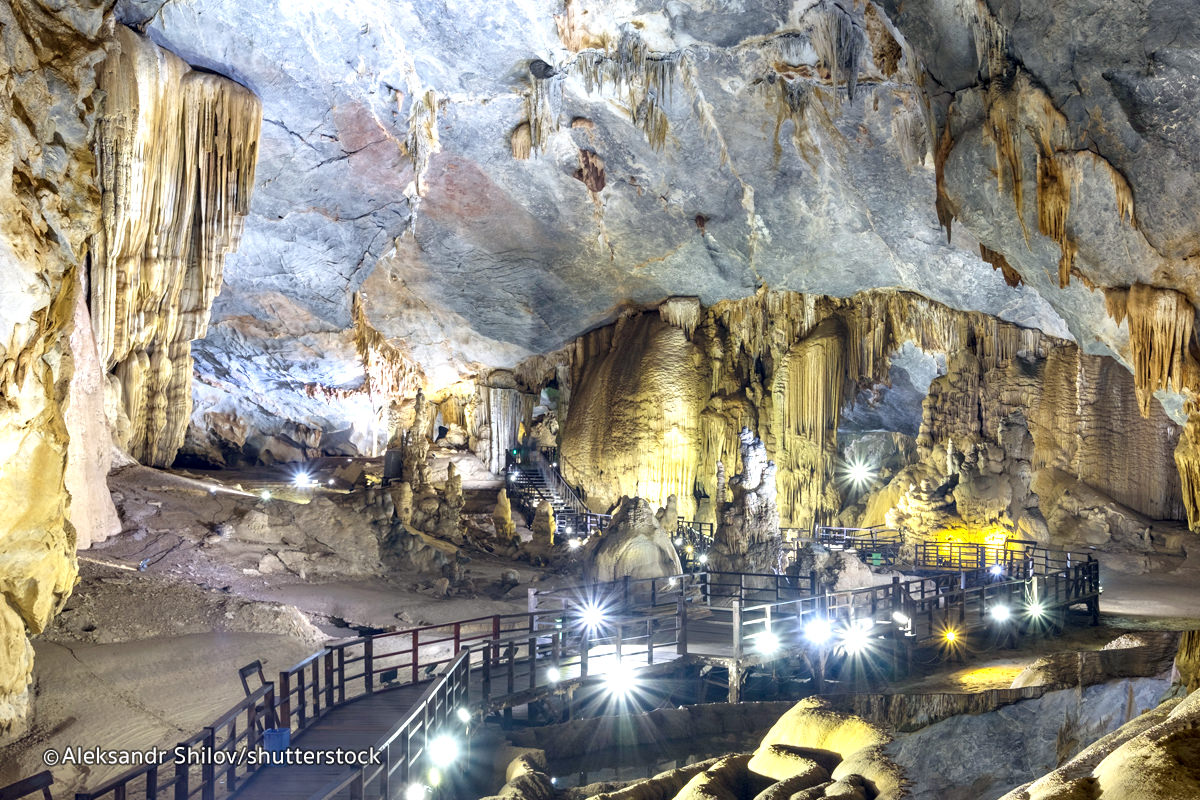 The oldest evidence of human occupation of the area are Neolithic axe heads and similar artefacts found in some of the caves. There are some relics of Ham Nghi King, a final King of the Nguyen dynasty before the French colonial period, at the Maria Mountain in the north of the Park. Currently the Arem, Ma Coong and Ruc ethnic groups live in two villages in the core zone of Phong Nha Ke - Bang National Park. Until 1962 these indigenous people lived in the forest in houses made of bamboo and leaves or in the caves, living from forest products and hunting. They used simple tools and their clothes were made from the bark of a toxic forest tree (Antiaris toxicaria) and lianas.

Since 1992 the Government of Vietnam has set up two new settlements for these 475 people, who are the two smallest ethnic groups in Vietnam. These people are familiar with a number of economically valuable species, especially precious timber such as Mun and Hue (Diospyros spp., Dalbergia rimosa), and oil-extraction from species such as Tau (Hopea hainanensis) and many medicinal plants. The Phong Nha Cave has long been a site of religious and touristic importance, with an old Cham Temple discovered in the cave and it was a site of worship in the ninth and tenth centuries. During the war with the USA the Phong Nha - Ke Bang forest and caves were a garrison and weapons store for the Vietnamese army.


Phong Nha-Ke Bang National Park is of high conservation value as one of the largest areas of intact forest habitat remaining in Vietnam. As part of a continuous forest block with the neighbouring Him Namno Biodiversity Conservation Area in Laos it forms one of the largest areas of forest on limestone karst in Indochina. The presence of tall lowland forest, which is regionally threatened as a habitat type, in the National Park increases the area's conservation value.


The number of tourists has increased dramatically since the park was listed in UNESCO's World Heritage Sites. Tourism activities in the area are the responsibility of the Trading and Tourism Department of Quang Binh province, with 280 international standard rooms in the province and 8 vehicles with capacities of 4 to 15 seats for tourist transportation. The forest guards of Son Trach commune in Bo Trach district are placed on tourist security duty.

Quang Binh Province has invested into upgrading the Phong Nha-Ke Bang visitor site to turn it into one of Vietnam's major tourist destinations.

Multiple eco-tourist projects have been licensed for development and the area is being heavily developed by the province to turn it into a major tourist site in Vietnam. Phong Nha Ke Bang is part of a tourism promotion program called: "Middle World Heritage Road" which includes the ancient capital of Hue, the Champa relics of My Son, the city of Hoi An, nha nhac and the Space of Gong Culture in the Central Highlands of Vietnam. 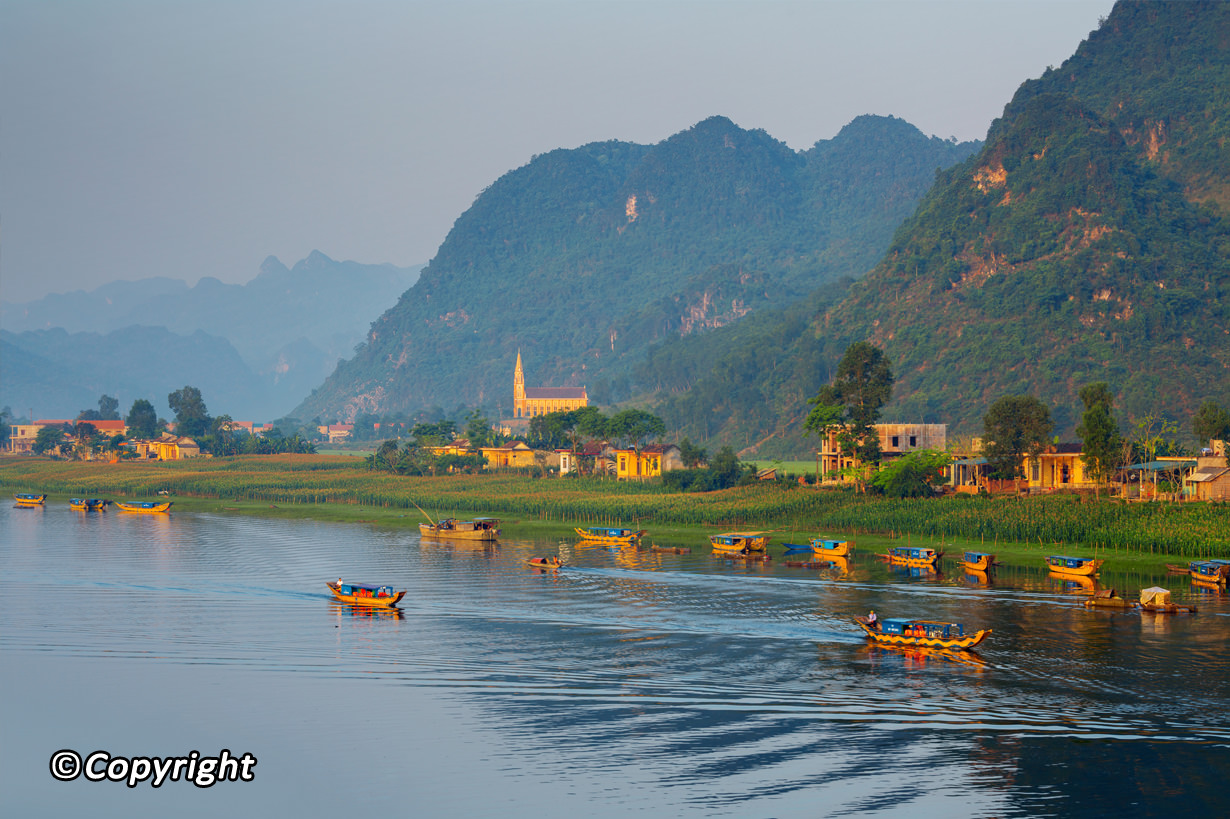 Tour for expedition of caves and grottos in boats and with professional cave expedtion means.

Ecotourism, discovering the florae and fauna in this national park in the Ke Bang Forest.

Mountain climbing: There are extreme sloping mountains here with a height of over 1,000 m, which is a real challenge for adventurous climbers

In order to facilitate the increasing flow of tourists to the site, the Dong Hoi Airport was constructed and is due to be operational at the end of 2008.

Phong Nha-Ke Bang, together with Ha Long Bay and Fanxipan of Vietnam, is listed as a candidate for 7 new world natural wonders vote. As of February 12, 2008 it ranked 10th in the voting list.

In summary, Phong Nha displays an impressive amount of evidence of earth’s history. It is a site of very great importance for increasing our understanding of the geologic, geomorphic and geo-chronological history of the region.