Hoa Lu Ancient Capital is the tourist destination which will bring you to a few imperial capitals of the country in the ancient and medieval eras.

Hoa Lu is some 110km or two hours from Hanoi. Located near the town of Ninh Binh, Hoa Lu is the site of a 10th-century capital of an ancient Vietnamese Kingdom called Dai Co Viet. This small Kingdom covered an area of only 300 hectares, and reigned from the 10th century, during the Dinh and Le dynasties, to the 11th century, during the Ly Dynasty. The Kingdom was enclosed by a citadel. The citadel and the Yen Ngua limestone hills provided good defence for this kingdom against the Chinese. The mountains and sea combined to make Hoa Lu’s picturesque landscape. Hoa Lu lays in a flat valley surrounded by the Trang An lime stone mountains, which form a natural wall protecting the old citadel. The city’s northwest is bordered by the Hoang Long River, the tributaries of which run through the capital, cooling the weather within the city and serving as convenient waterways.

Not much of this ancient kingdom is left standing. Whatever that remains of the palaces and shrines would only be of interest to archaeologists. The Royal Court was built in an area of 150 hectares in the eastern part of the capital while the western part served as a site to educate and protect children. The surrounding to be quite picturesque, with its ponds and limestone range forming a jagged horizon. There are two 17th century temples, modelled after their 11th-century originals that are on most itineraries to Hoa Lu. They are the Dinh Tien Hoang Temple and Le Hoan Temple, dedicated to the founder of the Dinh Dynasty and to its successor, reachable after a climb of more then 200 steps. I shall describe these two temples separately on their respective pages.

As the capital of the country for 41 years, Hoa Lu has many palaces, pagodas, tombs and pavilions that were built by different dynasties. One of the most popular pieces of architecture is the Bao Thien Tue Palace, which was plated with gold and silver. However many vestiges have been destroyed due to time and weather.

In 968, Dinh Bo Linh ascended to the throne and took the name of King Dinh Tien Hoang and reunified the country under the name of Dai Co Viet. Hoa Lu was its capital for 41 years (968-1009). The first 12 years were the Dinh Dynasty while the rest were the Le Dynasty with King Le Dai Hanh. In 1010, King Ly Thai To moved the capital to Thang Long (Hanoi now).
Coming to Hoa Lu visitors can attend traditional cultural festivals here, and the most important and largest of them is the Truong Yen Festival, which is held on the 10th day of the third lunar month. The festival is in memory of the Kings of the Dinh and Le dynasties. The festival lasts for three days with many traditional games and martial arts, reflecting local residents’ legends. 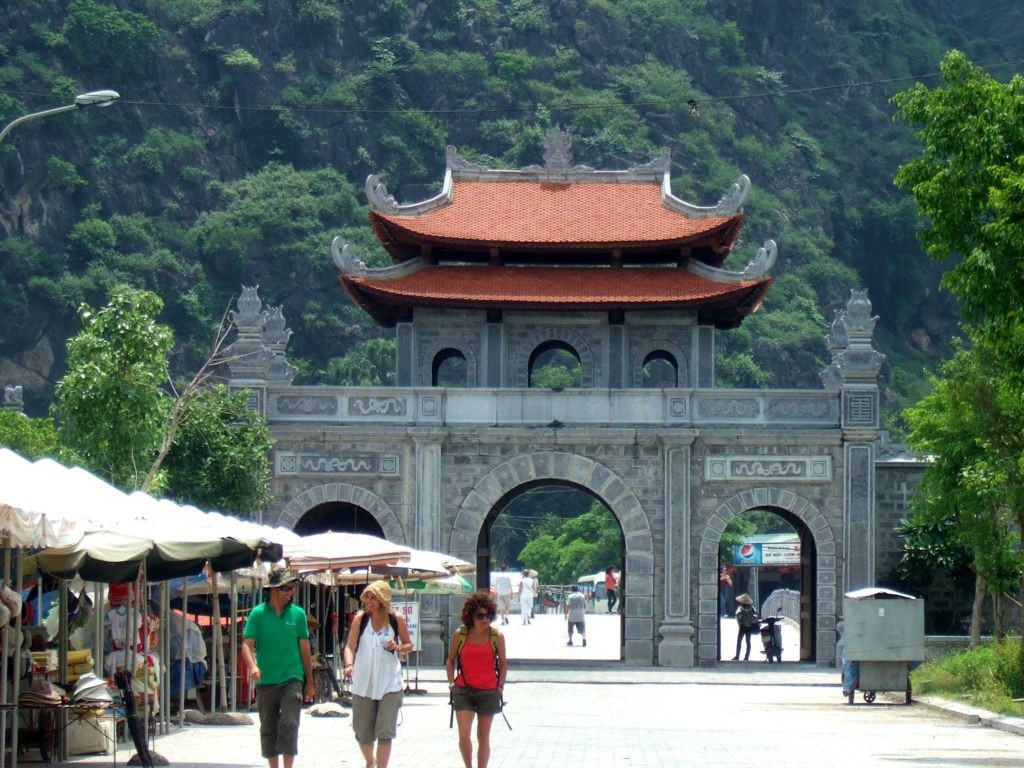 The festival is held annually on the 10th -13th of March of the lunar calendar in Truong Yen commune, Hoa Lu district with the purpose of commemorating the two kings Dinh Tien Hoang and Le Dai Hanh.

How to get to Hoa Lu?

You can easily get a day tour from Hanoi to visit Hoa Lu from most travel agents in Hanoi. Such a tour usually includes a boat ride at Tam Coc as well. The tour begins in the morning and ends at the early part of the afternoon. Hoa Lu is about 110km from Hanoi, and takes 2 hours to reach.